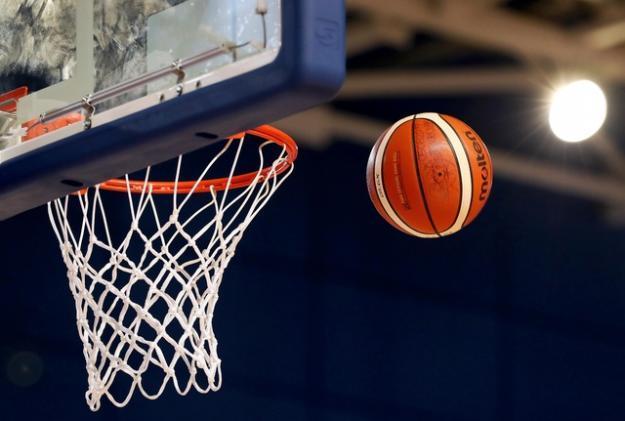 Colaiste Pobail Bheanntrai are Under 19 C Boys All Ireland Schools League champions, after a thrilling 39-32 point win over O’Carolan College of Nobber Co. Meath at the National Basketball Arena in Tallaght this afternoon.

A superb MVP display from Bantry's Liam Cotter coupled with great scoring from John Endersen, Thomas Flynn and Sean Brady was the difference between the two sides, and they held firm in the face of a late comeback from O’Carolan College to see themselves home to All Ireland glory.

Indeed, the Cork school laid the groundwork early, as they stormed into an 8-0 lead by the midway point in the first quarter, Nobber’s Killian Markey and Killian Price got their side off the mark to trail 11-5 at the first buzzer. 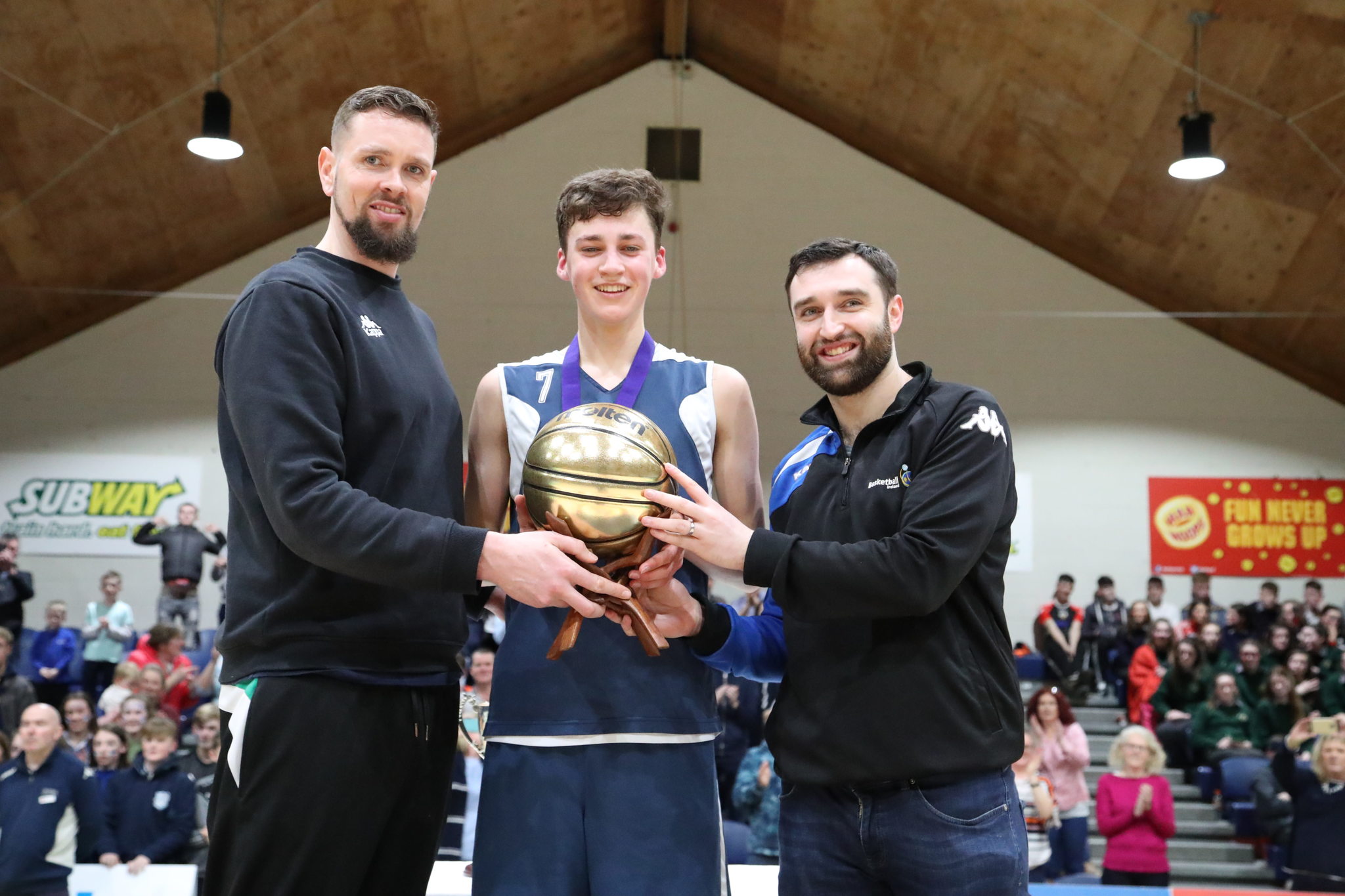 Bantry's kept the pressure up throughout the second quarter, limiting Nobber to just five points in the eight minutes, and dazzling offensively themselves, with Liam Cotter, Thomas Flynn and Matthew Barry all hitting the target in style to lead 27-10 going in at the break.

Another solid performance in the third from Colaiste Pobail kept them firmly in the driving seat. Good scores from Sárán O Fionnagáin and Markey however brought Nobber right back into it and it was officially game on going into the last.

The Meath team were not going down without a fight and put in a huge fourth quarter (outscoring Colaiste Pobail) that was almost enough to see them close the gap, but Bantry held on to win in the end by seven, 39-32.

U16 A Boys All Ireland Schools League Final

U16 A Boys All Ireland Schools League Final 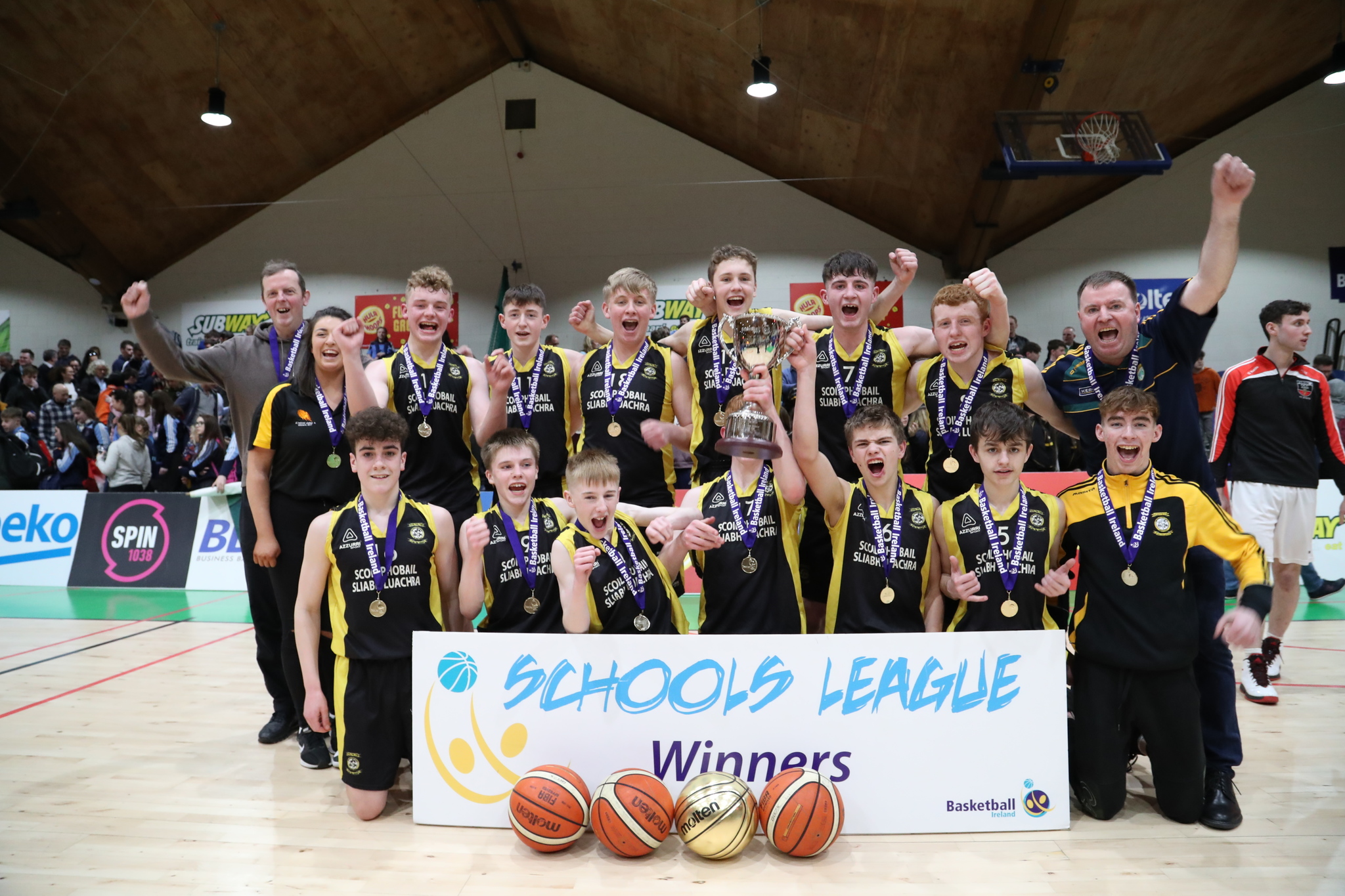 Scoil Phobail Sliabh Luachra of Co. Kerry drove home to the U16 A Boys All Ireland Schools League title in style this afternoon with a thrilling 61-55 win over Cork’s Scoil Mhuire Gan Smál.

In a game that was teed up to be a thriller from the off after the two sides came through two tough semi-final clashes to book their spot at the Arena, it certainly didn’t disappoint. Scoil Phobail Sliabh Luachra were in control for much of the game, but a dazzling fourth quarter comeback from Scoil Mhuire Gan Smál  ensured a nerve-wracking finale.

The opening quarter was a close and tense affair, with the teams matching each other score for score in the early exchanges. Good shooting from Blarney's Eli Lenihan, Mark Maguire and Matthew McCarthy kept the scoreboard ticking over for them, but Rathmore’s PJ McAuliffe, Ronan Collins and James Darmody had a response every time and they lead 12-8 at the end of the first.

The Kerry team began to hit their stride in the second quarter, and put up a whopping 23 points in the eight-minute period with Ronan Collins and Alan Dineen shining brightest. Again, Maguire, Lenihan and Kelvin O’Donoghue worked some good scores for Blarney, but Scoil Phobail Sliabh Luachra looked in control at the half, leading 35-23.

The third quarter continued in the same vein, with Rathmore’s Damien Cronin, Alan Dineen and Paudie Murphy all chipping in with good scores, while O’Donoghue and Lenihan worked relentlessly for Blarney.

Leading 51-38 at the end of the third, it looked like Scoil Phobail Sliabh Luachra’s work was done, but Scoil Mhuire Gan Smál were having none of that. By the midway point, they had closed the gap to 59-45, and then, a dazzling run which included scores from Eli Lenihan – to include two huge three-pointers from the young international star – and fantastic shooting from O’Donoghue, suddenly saw the game back to four points, 59-55, with just over a minute to go.

Under 19 B Girls All Ireland Schools League Final

Under 19 B Girls All Ireland Schools League Final 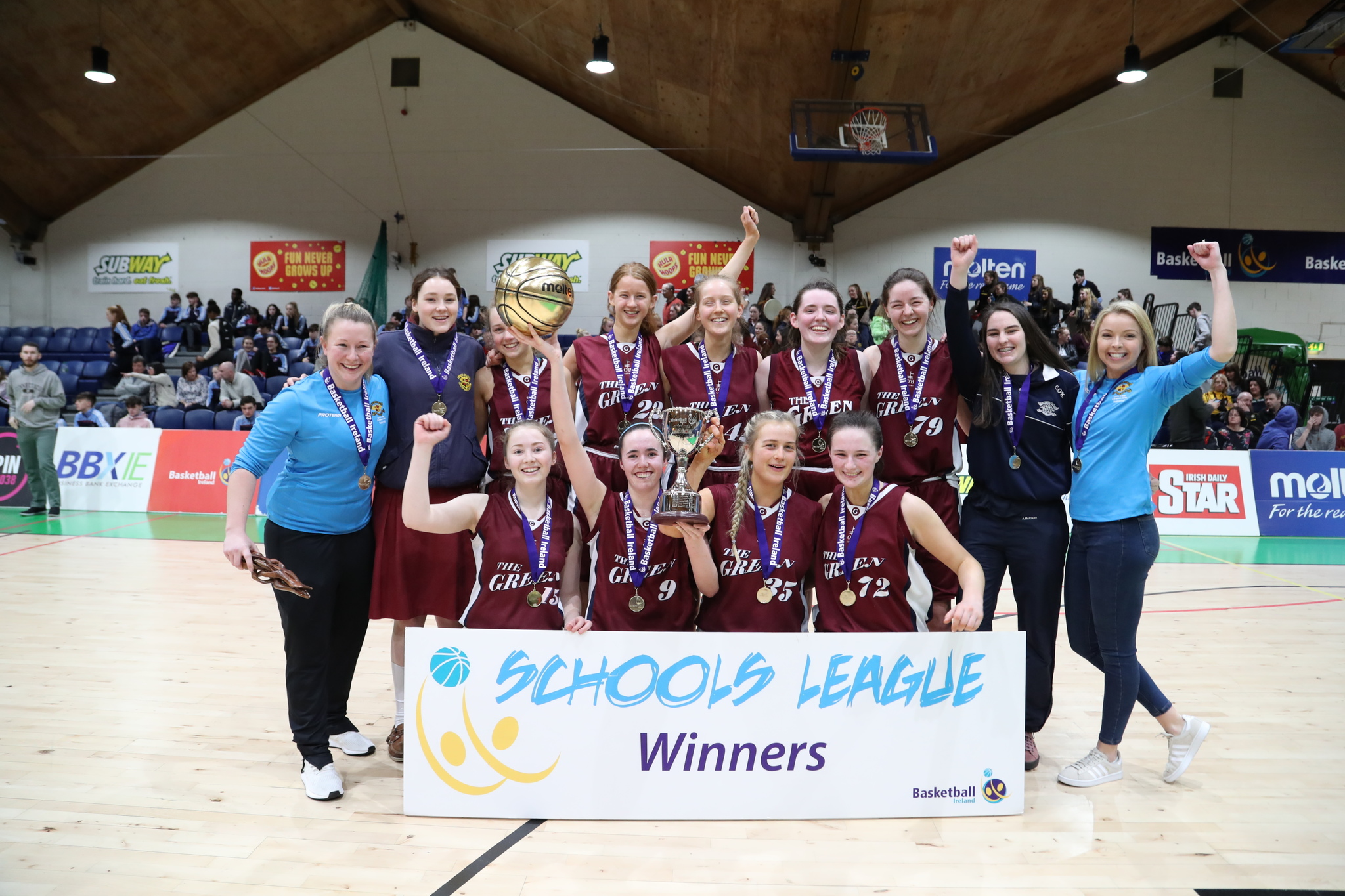 Loreto Stephen’s Green (Dublin) have more silverware to add to their collection as they scooped the U19 B Girls All Ireland Schools League title this afternoon as they overcame Scoil Mhuire Gan Smal Blarney with a 43-33 win at the National Basketball Arena.

Today’s win completes a superb double for the school, who were crowned Subway Schools Cup champions back in January, and it was captain fantastic and MVP of the game, Lauren Devitt who was the driving force behind the victory once more.

It was a slow start for both teams early on as they both took time to settle into the game. Blarney’s Aoife Mc Sweeny opened the scoring with 5:58 to go in Q1, and a Simone O’Shea inspired five minutes saw them hold a 16-12 lead at the end of the first.

The second quarter was a much tighter affair, with Lauren Devitt beginning to fire on all cylinders for Loreto, and super scoring from Laura Furlong and Clodagh Cullen put momentum with Loreto and an outside shot from Furlong brought the sides level with two minutes to go until half time. Lovely link-up play between Julie Donnelly and Devitt saw Loreto take their first lead of the game, finishing out the quarter 29-24 ahead.

A third quarter switch up on defence from Loreto head coach Sarah Woods saw them put a box and one on Blarney threat, Simone O’Shea to make it extremely difficult for the Cork team to execute their scores. Great displays from O’Shea, Sinead Singleton, Eve Mullins and Emma Murphy just weren’t rewarded though, while at the other end, Loreto’s Furlong and Devitt put on a shooting display and stretched their lead over Blarney to nine points at the end of the third.

The final quarter saw Loreto maintain the same tempo and tenacity as the third, with Furlong and Devitt continuing to cause problems for the Blarney defence and as the clocked ticked down, the gap was just too much for Blarney to close and Loreto ran out 43-33 winners and added a second All Ireland medal to their collection.

Under 16 B Boys All Ireland Schools League Final

Under 16 B Boys All Ireland Schools League Final 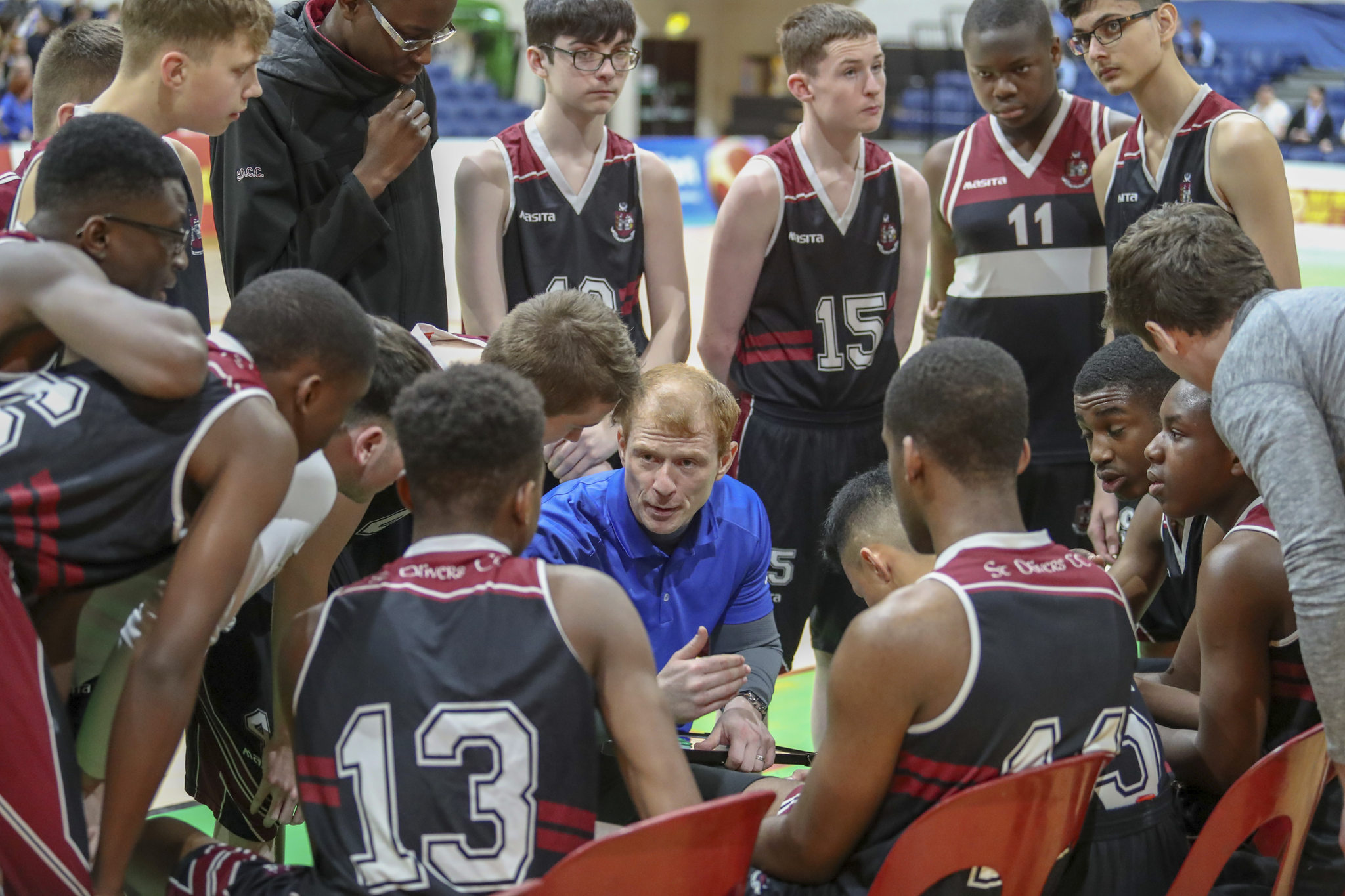 St Oliver’s of Drogheda drove home to a memorable Under 16 B Boys All Ireland Schools League title this afternoon with a 61-44 point win over reigning Subway Schools Cup champions, Colaiste Einde of Galway.

While the Galway side were hoping to scoop two All-Ireland titles this year, St Oliver’s had drastically different ideas and from the start, took the reins of the game with a fast-paced, driving offense and a tenacious defence.

These two sides are no strangers to each other this season, having previously met in the Subway Schools Cup semi-final which Colaiste Einde won, but revenge was certainly sweet today for a well-drilled and on-form St Oliver’s side.

Superb displays from Wede Esajobar, Clinton Ofodile and Josh Ola for St Oliver’s sent them into the lead early on, as they chipped in some great scores to have a ten-point cushion (17-7) at the end of the first.

They kept control in the second, limiting Colaiste Einde to just seven points, as they extended their lead with Ofodile, Esajobar and Ola all increasing their tallies, while Zain Timajo worked brilliantly on defence to get some vital interceptions to lead 30-14 at half time.

Colaiste Einde weren’t done though, and settled more into the game in the third quarter. Cup MVP Malik Thiam had a huge quarter, bagging eight points for the Galway team, while James Parnell, Ben O’Sullivan and James Webb were also on hand to try and close the gap. Again, captain Ofadile, Mark Alao and Ola responded well at the other end, and managed to stretch their lead back out as the clock ticked down to lead 48-30 going into the last.

Time was not on Colaiste Einde’s side as the fourth got underway, with Oliver’s laying down the marker with six quick points from Timajo, Ofadile and Esajobar. Thiam, Webb and Parnell continued to work hard at the other end, but the mountain was just too big to climb and St Oliver’s were crowned deserving All Ireland League champions.