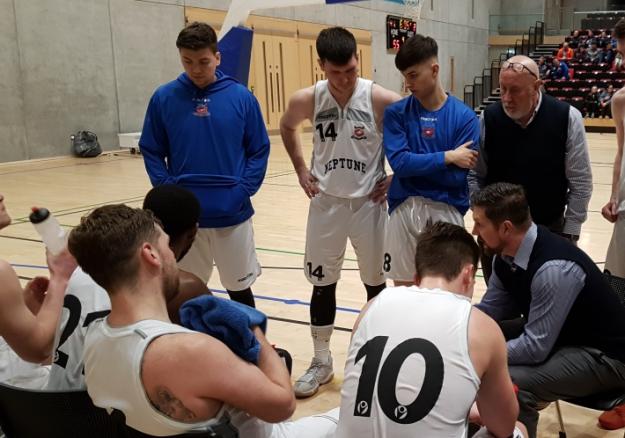 Neptune Basketball Club are on their way back to the Basketball Ireland Men’s Super League next season after they put in a huge performance against Éanna this evening in a relegation/promotion battle in Waterford.

After getting off to a shaky start which saw Éanna open up a 10-0 lead, Neptune bounced back well, to close the gap to just seven at the end of the first, and they put in a big second quarter to lead 46-32 at the half. Huge scoring from Roy Downey, Jarrel Marshall and Gary Walsh was supported by a superb display from David Murray and, despite the best efforts of Éanna's Tamron Manning, Neil Lynch and Conor Gallagher, Neptune powered home to a 78-67 point victory in the end.

“It’s surreal, I don’t think it has sank in yet!" said head coach, Paul Kelleher afterwards. "We were superb in the end, our defence was sensational. I think the tough games recently, the Killorglin and Ballincollig games, were the ones that helped us be successful tonight.

“We’ve done our business properly here tonight, but I don’t think it’ll hit any of us until tomorrow morning," he continued. "It’s a year ahead of when we thought it would be, but we’re really looking forward to it. Roll on the Super League! We’ve a big game back here in Waterford on Friday night and we’ll focus on that now.”

Meanwhile, Black Amber Templeogue played out yet another overtime battle tonight as they went head-to-head with Pyrobel Killester in the Champions Trophy semi-final at the National Basketball Arena in Tallaght. Templeogue took command of proceedings early on, driving into a 22-9 point lead at the end of the first, but strong shooting from Killester brought them right back into the game and, by the end of the third, it was neck-in-neck. Scores continued to rain in at both ends of the court and, tied at 70 points apiece, the game went to overtime where Templeogue edged it by two points, 75-73, in the end.

Speaking afterwards, a relieved Mark Keenan of Templeogue said: “It’s a relief to get through. We got a great start and we knew they were going to come back at us. They were missing a lot of shots early on and we did capitalise on it, but as soon as they started hitting shots, we started missing them, and all of a sudden it was a dog fight."

“I thought we did really well at the end of regulation to get a couple of stops to hold ourselves in there and obviously, we got the first five points of overtime and then it was all defence. I’m just delighted for the effort the lads have put in. We wanted to get back to the Champions Trophy final because we have lost it twice, and we have a couple of days to recover now and the boys will be up for it Saturday.”

You can view the rest of this week's fixtures here: http://www.basketballireland.ie/news-detail/10036947/