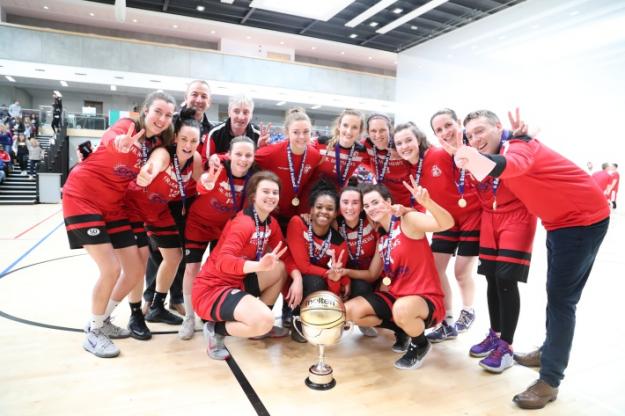 Garvey’s Tralee Warriors are Men’s Champions Trophy champions once more, as they defended their title in style in Waterford this evening with a 73-61 point win over Black Amber Templeogue.

In a repeat of last year’s game - which went to overtime - a huge display down the stretch from Paul Dick and Goran Pantovic was ultimately the winning of the game for them and they head back to the kingdom with the champions crown.

A nip and tuck opening quarter saw Templeogue have the better of the opening exchanges, but Tralee soon found their rhythm, with Trae Pemberton hitting some big scores and by the midway point, it was a tie game, 10 points apiece. Strong boards from Jason Killeen coupled with the high energy of Lorcan Murphy edged the Dubliners ahead by the end of the first, 17-14.

A big second quarter followed, with Tralee settling even more, and Paul Dick beginning to take charge at the top of the key, and adding seven points to his side’s tally. At the other end of the court, Killeen was still causing countless problems for the Tralee defense, picking off some big scores, while Neil Randolph and Luke Thompson chipped in with some vital baskets. Pemberton pushed Tralee forward though, and some nice link up play with Kieran Donaghy saw them move ahead by four at the half time break, 36-32.

Momentum stayed with Tralee as the third got underway, with Goran Pantovic hitting the target in style to keep their lead intact. Huge blocks by Jason Killeen kept the offensive pressure at bay as Tralee tried to find a way to open their lead further. Up stepped Paul Dick and Pemberton once more, and by the end of the third – despite Killeen’s and Mike Bonaparte’s best efforts – Tralee were ahead 54-45.

A huge fourth quarter ensued, with big scores raining in from Templeogue as they tried to close the margin once more. Killeen was once more a stand-out for the Dubliners, and Tralee were dealt a huge blow as, with 6.36 minutes to play, Trae Pemberton picked up his fifth foul of the game and was fouled out. This seemed to inspire the team more though, as with the gap closed back to four points, Tralee’s Paul Dick and Goran Pantovic stepped up to the mark and netted some huge scores to widen the gap to lead 64-58, and another huge score from Paul Dick sent the crowd wild. They continued to push on, and with the roar of a huge Kerry crowd behind them, won out well in the end, 73-61.

Ambassador UCC Glanmire rounded off their Women’s Super League season with a coveted piece of silverware today, as they ran out 76-63 point winners over last year’s champions, Courtyard Liffey Celtics in the final in Waterford.

An MVP performance from Grainne Dwyer was one of the big talking points of the day as she, along with a star-studded cast of talented players, drove Glanmire home to glory this afternoon ensuring that the three big women’s titles of the season have now gone to three different clubs.

The opening quarter was neck-in-neck, with Dwyer and Ashley Prim standing out for the home side, and a superb display for Aine O’Connor of Liffey Celtics at the other end saw the game extremely close. O’Connor was dominating under the boards, and with Sorcha Tiernan on form for the Kildare team, they headed in at the buzzer 20-15 up.

A frantic second quarter ensued, with Devon Brookshire and O’Connor dominating for Liffey, while Claire Rockall, Casey Grace and Dwyer were finding the target for Glanmire. Rockall and Prim linked up in style as the quarter ticked down, and the Cork side began to take control of their offensive boards to drive into a 10-point lead at the half, 36-26.

Facing into a ten-point deficit starting the third, Liffey Celtics certainly were not daunted by the challenge. Tisha Phillips shone bright for them, re-entering the game after picking up an eye injury in the opening quarter. Closing the gap back down to a point, their run was stopped in its tracks as Dwyer and Prim put in huge scores at the other end, and a massive defensive display by Glanmire pushed them out on the break and they stretched back into a 10-point lead once more by the end of the third.

It was all still to play for in the last quarter as Glanmire’s Casey Grace and Claire Rockall continued their battle under the basket in the face of a hugely in-form Aine O’Connor. Indeed, huge work from O’Connor and Brookshire began to counteract the fast pace of Glanmire’s offense, and it was back to just three points with a little over a minute to go. A deep dig into the reserves from Dwyer and Prim down the stretch though saw Glanmire edge the gap out once more and Aine McKenna added more damage from the free throw line to run out 76-63 point winners in the end.

IT Carlow Basketball were crowned Men’s Division One League Cup champions this afternoon with a superb 88-72 point win over Dublin Lions in Waterford.

A huge performance across the board from Carlow saw them drive into an early ten-point lead and they continued to impress at both ends of the court to push home to victory in the end.

Despite having played a game less than 24 hours previously, Carlow certainly didn’t look tired, and huge scoring from co-captain Kevin Donohoe, Jimmy Gordon and Armand Vaikuls kept them ahead in the face of a determined Dublin Lions team. Indeed, Lions had many moments of magic, with young star Tiernan Howe one of the stand-out performers on the day, while Chris McNairney and Muhamed Sabic were hugely impressive as well.

Carlow got off the mark in explosive fashion, driving into a 10-3 lead midway through the first, with Gordon and Donohoe on target early. Howe responded well at the other end for Lions, but Carlow held a 25-15 lead at the buzzer.

The second quarter was just as high intensity, with big scoring at both ends of the floor. McNairney and Sabic pulled up some big scores for Lions, while Howe added another six points to his tally and they trailed Carlow 47-38 at the half.

The closing quarters were just as fast-paced, with Carlow pushing out in the third as scores rained in from Donohoe, Vaikuls and Alan O’Neill, while Gordon dunked his way home to glory to lead 74-55 at the end of the third. Despite a huge fourth quarter from Lions, the mountain was just too big to climb and despite the best efforts from Howe, Sabic, Igor Markiewicz and Tomas Mikalauskas, Carlow ran out 88-72 point winners in the end.

Cup Champions Fr Mathews picked up their second piece of silverware of the season today as they overcame regular season champions Marble City Hawks 43-48 in the Women’s Division One final in Waterford.

It was a game of endurance and pure grit as both teams doubled down on physicality with Marble City Hawks falling into foul trouble early on in the first quarter, sending Mathews to the free throw line. Sheila Sheehy kicked off the scoring for the Kilkenny side, but Mathews responded almost immediately and the opening minutes were neck-in-neck with just one point separating them at the first buzzer, Hawks ahead 12-11.

A mix of steals, fouls and turnovers provoked a low scoring second quarter, while the running battle between Kelly O’Hallahan and Ashley Cunningham under the boards was a major feature of the second quarter as both sides’ defence got on top of proceedings. Despite Katie Fox and Aine Sheehy hitting some big scores for Hawks, the game became deadlocked for over four minutes at 17-17 as defence reigned supreme. Aine Sheehy finally broke the spell to put Hawks ahead, and they led at the break, 23-17.

The third quarter was a much livelier affair, as Sheehy once again stepped up to the plate with huge consecutive scores to extend Hawks’ lead. Fr Mathews’ Ashley Cunningham – who was having one of the performances of the season - clocked up her fourth foul in this quarter, forcing coach James Fleming to withdraw her for a break. As the sides continued to match each other score for score, it was the dying minutes before Fr Mathews began to find some breathing space. A layup from Kellie Cahalane with 1.44 to go put them ahead 45-44 and, with Hawks on team fouls, Hollie Herlihy extended the lead from the free throw line. With time against them, Hawks drove hard to close the gap, but the clock ran out and Mathews were crowned champions on a final scoreline of 48-43.