A tribute to Paudie O'Connor 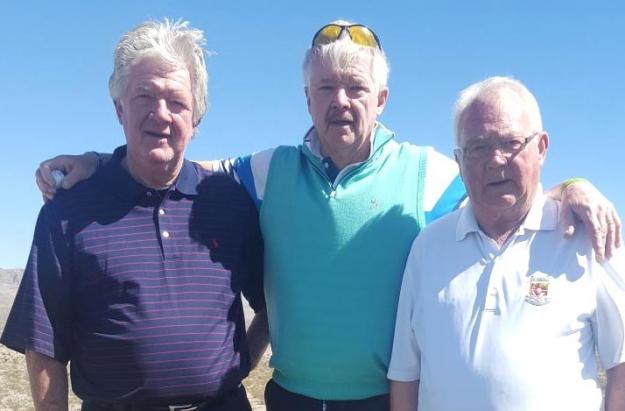 1951 was a momentous year for Killarney basketball. Local historians recall that the very first game of basketball took place in November of that year in the old Killarney Town Hall featuring the likes of Eamon O'Donoghue, Ben Campion, Johnny Culloty and Paddy Culligan.

September 1951 was also a very significant month that year which marked the birth of Paudie O'Connor, a basketball player who went on to revolutionise the game in Ireland and set high standards for everybody else to follow.

The son of Dan and Mai O'Connor, Paudie grew up at No. 1 O'Sullivans Place, Killarney.
Former neighbour and friend Weeshie Fogarty recalls an interesting story about the small green area in the neighbourhood with one timber telegraph pole in the centre where Paudie and his brothers Seamie, Mike and Benny erected a hoop on the pole. Paudie climbed on top of his brother Seamie's shoulders and attached the hoop to the pole and it was there that he honed and polished his amazing shooting and scoring skills.

Facilities improved when St. Mary's Parish Hall opened with a proper indoor basketball hall and a young Paudie O'Connor soon
emerged as the most exciting talent on the Killarney and Kerry basketball circuit during the 1960s. In his late teens and early twenties Paudie spent his summers in the USA attending basketball camps under the guidance of former NBA player 'Pistol' Pete Maravich and American coaching legend Dean Smith.
Paudie won various county championships with the Busby Babes in the late 1960s while in 1969 he starred for the he Kerry Senior and minor Basketball teams that won All-Ireland titles. During the the 1970s St. Vincent's Killarney was the main team in town and began to establish themselves as one of the top sides in Ireland and were always challenging for honours in national tournaments and leagues.
Following Paudie's death this week, Seamie O'Connor recalled some of his proudest moments playing alongside his brother on the basketball court. One was on a St. Vincent's Killarney team that defied all the odds to beat a star studded US Navy team at a tournament in Sligo in 1972. Killarney were led Lawrence O'Donoghue (RIP), Sean Coleman (RIP), Paudie and Seamie O'Connor, Billy Healy, Tom Looney, Tim Regan, Rory O'Flaherty and James O'Connor. Another fond memory that Seamie recalled was when the Kerry senior basketball team defeated Cork in the 1974 Munster final in the Parochial Hall with three O'Connor brothers lining out for Kerry. The late Cork Examiner photographer and Killarney native Louis MacMonagle captured the historic photo after the match of Seamie, Paudie and Mike O'Connor. 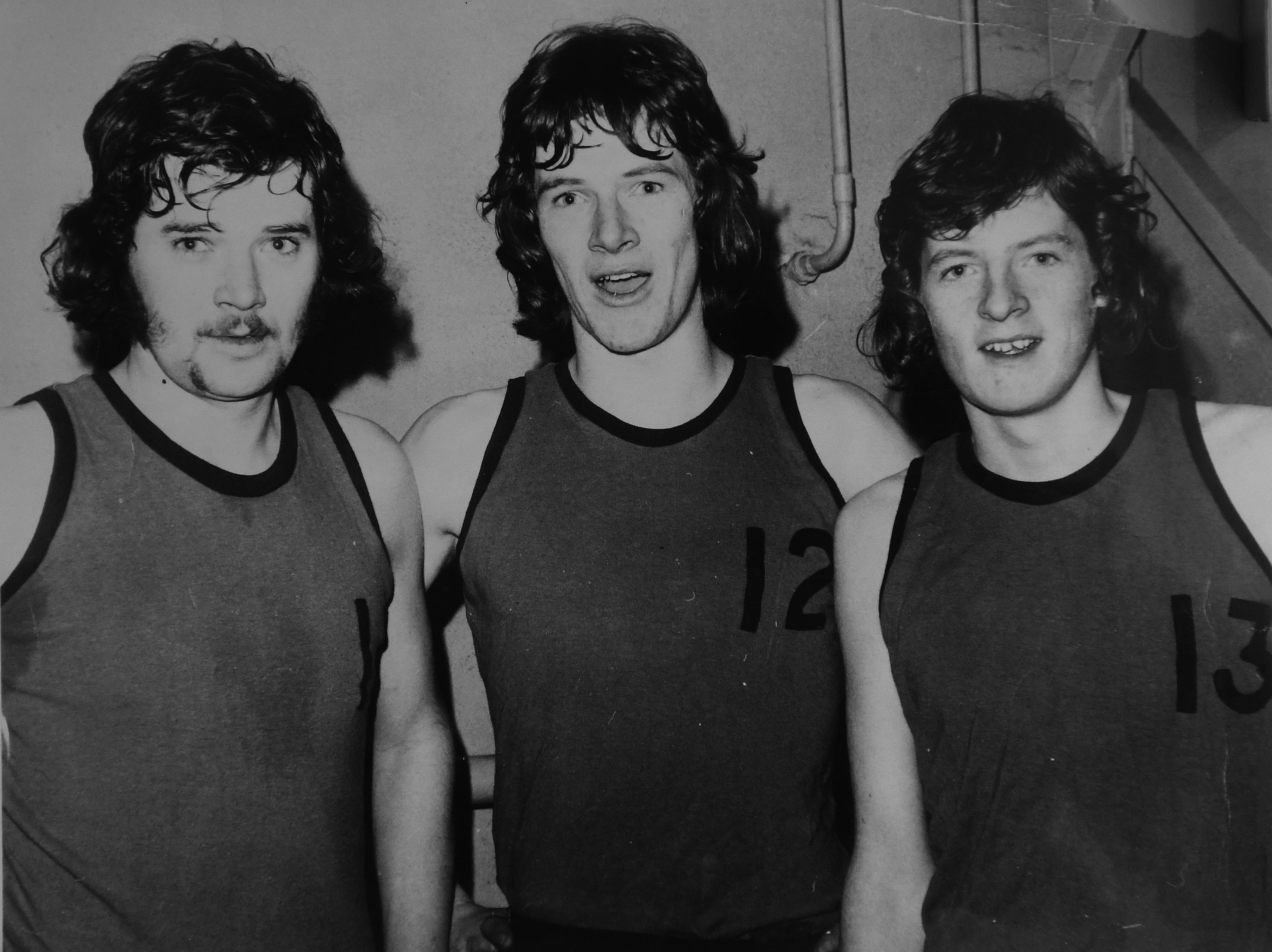 Pictured above: The three O'Connor brothers who played together on the Kerry senior basketball team that defeated Cork in the 1974 Munster final in the Parochial Hall Cork. From left are Seamie, Paudie and Mike O'Connor. Picture: Louis MacMonagle

In Irish basketball circles, Paudie O'Connor is best remembered for leading the Killarney initiative that brought the first professional American players to play in the national league. To glamourise the game and make it more appealing, Paudie argued that the showmanship and slam dunking skills of the Americans would bring basketball to a new level in Ireland. Despite objections from the governing body and other clubs across the country, the first American basketballers arrived in Killarney in September 1979. They were Greg Hugely and Cornel Benford. Two months later Brian Ulmer replaced Benford and St. Vincent's clinched the national league title and championship titles in the 1979-80 season.
By this time Killarney were playing their home games under the Gleneagle banner in the new St. Brendan's Gym and were also
participating in the Federation Cup, a competition for British and Irish clubs. Crowds of 800 people squeeezed into St. Brendan's at the
time to see Killarney dominate and bring Irish basketball to a new level in the early 1980s.
In the 1981-82 season Killarney won the double and were agonisingly pipped by Doncaster in a thrilling Federation Cup final in St. Brendan's. A controversial call on the final buzzer that gave the English side two free shots to win the game is still talked about to
this day. Talented Americans Tony Andre and Arnold Veasley completed a very formidable first five line-up alongside Paudie O'Connor, Tim Regan and Andy Houlihan. Indeed in an invitational tournament in Cork at the same time, Killarney led by Andre, Veasley, O'Connor, Regan and guest American Mike Pyatt were defeating teams that contained five American players.
With other teams following the lead set by Paudie and investing heavily to recruit top quality American players, Killarney's dominance at the top was challenged and began to decline in the mid 80s. Paudie retired in 1986 and moved to the USA shortly afterwards with his
American born wife Marty and daughter Morgan.
A few years in New York was followed by a move to Las Vegas where Paudie set up O’Connor Golf Tourism bringing high profile tours to
Ireland and to Scotland every year. Basketball legend Michael Jordan was his most famous client to come here on a golfing trip in May 1999. The six time NBA champion and his entourage stayed in The Aghadoe Heights Hotel and explored Killarney as well as playing golf in Killarney, Tralee, Ballybunion and Waterville.
In Kieran Shannon 's book 'Hanging from the Rafters', documenting the golden age of Irish basketball, former Irish Basketball chief
administrator Noel Keating described Paudie as the 'greatest Irish basketball player ever'.
Former Basketball Ireland President and former Marian Dublin player Paul Meany, who had many battles on the court with Paudie tweeted the following about Paudie this week: 'Sad to see Paudie's untimely death. Definitely in the top five Irish players who have ever played Basketball. Also Mr Basketball in the 1970s in Killarney where his creativity and innovation brought the national league into a totally different space. May he rest in peace'.

Sad to see Paudie's untimely death. Definitely in the top five Irish players who have ever played Basketball. Also Mr Basketball in the 1970s in Killarney where his creativity and innovation brought the national league into a totally different space. May he rest in peace https://t.co/ccfAhrGJRG

Paudie, who didn’t smoke or drink, was described by his lifelong friend John Keogh as a man ahead of his time, a proud Killarney man

and a wonderful ambassador for Killarney and Kerry. Basketball was his true sporting love but Paudie O'Connor was also an

outstanding football talent with Dr Crokes and was tipped by many to make Mick O'Dwyer's Kerry golden years squad during the mid 1970s. He played a number of challenge and national league matches for Kerry and once formed a midfield partnership in a tournament match for Kerry with his Dr Crokes and St. Vincents basketball teammate Lawrence O'Donoghue (RIP).

However Paudie was different to many of those around him who he felt were merely thinking in terms of All Irelands whereas he was was thinking of the international and global stage. He went on to win over 100 senior caps for Ireland as well as captaining his country, played in three pre-olympics qualifying tournaments and also had the distinction of being selected as the only Irish player ever on a

Paudie is still widely spoken as the greatest Irish basketballer of all time. Standing at 6’4”, he stood out against all other point

guards in that era where he ran the offense with precision and controlled the pace of the game. Basketball was always first choice sport for Paudie.

In a tribute, Weeshie Fogarty said the game of basketball completely owned Paudie and he never saw such dedication by any one person to his chosen sport.

Paudie never lost touch with Killarney returning home once or twice every year. His brother Seamie confirmed that he was due to return again in the next few weeks. During their regular phone conversations Paudie loved to hear the sporting news from Killarney, particularly the exploits of Dr Crokes and Kerry while he also had a keen interest in the fortunes of Scotts Lakers, who were captained by his nephew Philip this season.

Outside his sporting interests, Paudie was also well known in Killarney as the youngest ever Mayor and member of Killarney Urban

Paudie O'Connor's funeral is due to take place in Las Vegas on Monday, May 7th. A memorial service will take place in Killarney at a later