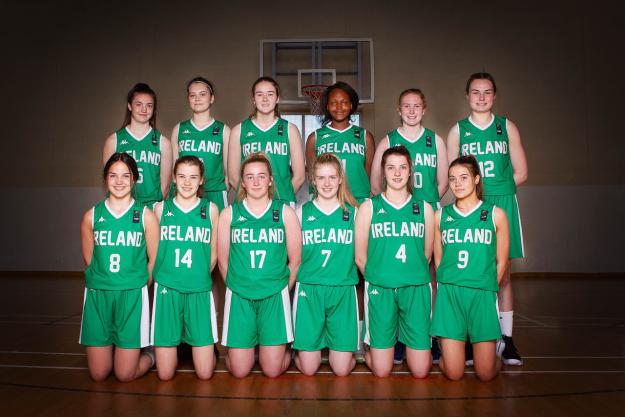 The Ireland Under 16 and Under 17 women’s teams hosted Scotland’s Under 18s in an international weekend friendly series in Kerry.

Ireland Under 16 and 17 Women's Results

Ireland U17 69-78 Scotland (after double overtime)

Ireland U16 and U17 Women's Detailed Results

Ireland Under 17 women dished up a thriller in the kingdom this evening as they went to double overtime against the Scottish Under 18 women’s team.

Liam Culloty’s charges put in a superb performance in their second clash with the visitors, getting up to the pace of the game from the start and working hard on defence to see it all square at 16-16 at the end of the first.

Midway through the second, Scotland had edged ahead after some impressive link up play to lead 19-28. However, Ireland dug deep and brought it back to just one point at half time, trailing 30-31 going to the dressing room.

A big third quarter from the Scots saw them edge into a six point lead by the midway point, and they kept momentum to hold on to a 34-43 lead going into the last, but the Irish were not going down without a fight and a thrilling finish ensued. A superb start to the fourth saw Ireland back within three points with five minutes to play, and two minutes later, the scoring was tied. Nothing separated the teams on the buzzer as, at the end of regulation, it was 56-56 and overtime loomed. A big battle in overtime saw a huge performance by both teams, and again, it finished all square (66-66) at the buzzer. Double overtime was where Scotland finally edged ahead, and they held on to win 69-78 in the end after a superb team performance from Ireland.

Speaking afterwards, Ireland U17 women’s head coach, Liam Culloty, said: “I’m really proud of the team’s performance. We battled hard throughout the game. Our guards coped with their pressure really well. Katie Walshe and Niamh Kenny showed great leadership throughout and Orla Murphy hit some massive three pointers to keep us in the game.

“Any time you lose in double overtime it’s tough to take but I hope that valuable lessons were learned that the team can use going forward. The crowd and the support from the parents was terrific and really helped to push the players on. All of the squad members can be proud of their efforts over the weekend and we look forward to our next training session in Tralee on the July 24th.”

Ireland Under 16 women had a tough test against a physical Scotland team in Kerry this afternoon in their opening game of the friendly series.

Scotland started the game of the brightest, running into an early 5-0 lead, before Ireland began to hit their stride to leave the score at 10-20 in favour of the visitors at the end of the first.

Big displays from Erin Maguire and Hazel Finn in the second quarter saw the squad settle more, and by the midway point, had closed the margin to 19-25. Composure from the free throw line from Maguire brought the game down to three points, and the sides were soon level after some brilliant breaks by the Irish.

A brilliant steal from Siofra O’Shea set up Ireland’s next score of the game, before Scotland began to get to grips with Ireland’s pacey guards. They add some scores of their own to hold a slender two-point lead (29-31) going in at the half.

Scotland put in a good third quarter to keep ahead of the hosts, opening up an 11-point lead by the midway mark, and they held on to a 35-44 point cushion going into the last. Fatimah Akorede and Shauna Dooley bagged some big scores for the Irish as the fourth got underway to bring the margin back to four points, and despite a huge defensive display from the girls in green, the Scots pushed on to win out 46-54 in the end.

Ireland Under 17 women's lost out their opening game against Scotland Under 18 on Friday evening. A tough display from the visitors saw them take an early 9-17 lead at the end of the first, and kept up the pressure throughout the game to secure a 39-67 point win in the end.

Speaking afterwards, Ireland U17 women's head coach, Liam Culloty stated: "We are delighted to get the experience of an international fixture under our belts. It was a great learning curve for us and will definitely stand to all the team moving forward.

"For some of the girls it was their first time representing Ireland and I'm sure it's something that they won't forget. From a basketball point of view, we can take a lot from the game and try and improve for tomorrow's fixture. We battled really hard in the third quarter and fought our way back in to the game but in the end, the extra year really showed from an experience and physicality point of view. Mia Furlong was terrific for us with 19 points but all the team contributed and can be very proud of their efforts."