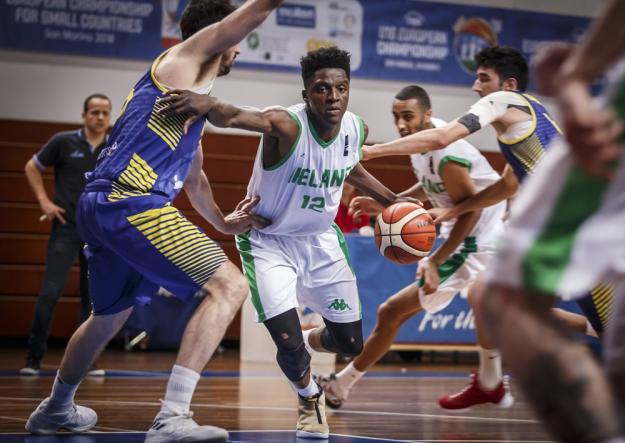 The Ireland senior men’s team are firmly focused on Norway this evening, as they prepare for a big semi-final showdown in San Marino tomorrow [Saturday] afternoon.

The boys in green finished second in Group B at the FIBA European Championship for Small Countries this week, following a win over Andorra in their final group game, but now face the much-fancied and tournament favourite Norway in the semi-final clash.
Norway cruised through Group A, winning out by 40 points over hosts San Marino, running out 35-point winners over Gibraltar and 16 point winners over Moldova to see them top their group.

Ireland will undoubtedly relish the underdog label though, and head coach Pete Strickland and his squad are ready for a big challenge on the boards tomorrow.

“Norway are as well drilled a team as we’ve seen in this tournament,” Coach Strickland said. “They’re very fast, and have shooters at all three guard positions. They are a very good team and now, we’ve got to figure out a way to slow them down a bit.”

In the Women’s European Championships in Cork meanwhile, Mark Scannell and his squad are hoping to keep charging on from their big win over Cyprus at the Mardyke Arena UCC last night, as they face Moldova in their first classification game at 4pm tomorrow.
Moldova finished bottom of Group A and are still chasing their first win of the tournament, but Coach Scannell and his squad are firmly focused on the tie.

“We want to build on last night’s win, freshen things up a little bit and try to get more from the entire panel,” he said. “Four games in five days is tough, and we hope to finish the tournament now with two more wins.”