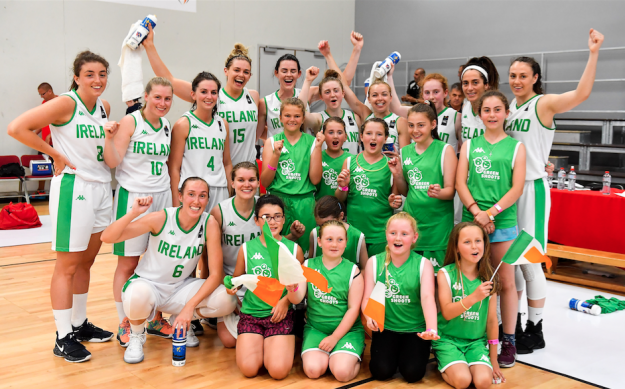 The Ireland senior women’s team were comprehensive winners over Moldova at the Mardyke Arena UCC in Cork this afternoon, seeing home a 102-28 point win in emphatic fashion.

Leading the scoring was Sarah Woods who top scored with 20 points, followed closely by an 18-point display for Casey Grace, and there were superb performances across the court all round.

Ireland laid down a marker early on, with Woods, Edel Thornton, Claire Rockall and Amy Waters all chipping in some big scores to take a 31-9 lead to the bench at the end of the first and kept the intensity high throughout the second to extend their lead even further. Good work from Hannah Thornton and Stephanie O'Shea widened the gap, while fantastic assists from Danielle O'Leary set Grainne Dwyer up under the boards to lead 59-15 at the half.

A dominant third quarter followed, with Sorcha Tiernan, Aine McKenna and Casey Grace all adding in more score to lead by fifty (72-22) going into the last, and the Irish kept the pace high in the fourth to see out a 102-28 point win in the end.

Today’s win now sees them through to a 5th/6th place battle tomorrow afternoon where they will come face-to-face with Cyprus once more – a team they met, and overcame, in the final group game on Thursday evening.

“I think our team has developed nicely over the tournament and we played some really nice basketball today too,” said head coach Mark Scannell afterwards. “We got a great spread of scoring today and there’s a great atmosphere now going into our last game tomorrow.

“Cyprus gave us a tough game the other night, and they missed a good few shots they probably would have normally made, so we won’t be taking them for granted at all,” he continued. “It’s going to be a hard game tomorrow and we just have to make sure that we’re tuned in and if we do that we’ll be okay.”