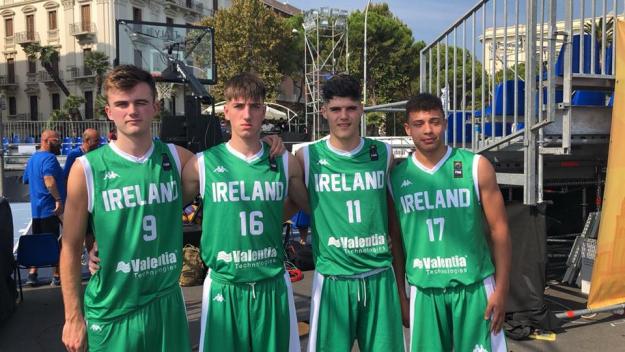 The Ireland under 18 men's and women's 3x3 teams are in action this weekend in the U18 FIBA 3x3 Europe Cup qualifiers.

The men's team will be in action in Bari, Italy, facing Ukraine and Germany in their opening group games while the under 18 women will tip off their campaign in Voiron, France.

The Ireland Under 18 women’s 3x3 team were defeated today by the Netherlands in their final pool game of the tournament.
Ireland started well with Katie Walshe getting the girls in green off the mark first, but the Netherlands responded with scores of their own to draw it level early on. For the first seven minutes, there was very little to separate the two sides. As the Netherlands began to distance themselves, Alex Mulligan responded with some fantastic drives to the basket and a slick two-pointer that kept Ireland within two points.
Ciara Bracken followed suit finding the net with a two of her own, however the Netherlands were on a roll. Two big two-pointers saw them stretch the gap to ten points and with a final shot outside the key, the game was done. The Netherlands ran out 22-10 winners and will move forward to the semi-finals.
Ireland’s Simone O’Shea spoke after the game: “We are obviously disappointed with the loss but we are happy our offensive game improved. To be fair to the Netherlands, they couldn’t miss today!”
Ciara Bracken reflected on her team’s tournament experience: “Overall, the tournament has been a great experience, unfortunately we didn’t come away with the result we wanted but we improved with each game and really enjoyed our time in France.”

The Ireland Under 18 women’s 3x3 team suffered a tough defeat this afternoon against Belgian. The Belgians proved too strong in today’s second game of the Europe Cup qualifiers in France.

Ireland started well and got the opening basket of the match courtesy of Katie Walshe.  Belgium responded in great fashion and outscored Ireland with six baskets on the trot to lead 6-1 with seven minutes to play.

A timely boost for Ireland was a free throw from Simone O’Shea who followed it minutes later with her second basket of the match to bring Ireland right back into the contest. The more physical Belgian side were in no mood to let Ireland back and tagged on two more baskets to lead 8-3. The match now looked as if it was getting away from Ireland.

Irish belief was still strong as Alex Mulligan landed a super two pointer to bring the women in green back at the Belgians once again.

Four baskets on the spin put the game to bed and ended Ireland’s chances in the game. Despite not winning this match Ireland finished very strong, scoring the last two baskets both coming from Simone O’Shea who scored four points in total for Ireland in a fine personal display.

Ireland will face the Netherlands tomorrow afternoon in the final game of the group stages.

The Ireland Under 18 women’s 3x3 team came up just short in the opening game of the FIBA Under 18Women’s 3x3 Europe Cup qualifiers against Romania this morning, losing out 9-6 in a tough and physical battle.

Romania were quicker off the mark, as they opened up a 2-0lead early on, but a free throw from Katie Walshe got Ireland off the mark. A huge block from Walshe followed as the sides remained neck-in-neck, and with scores at a premium, it remained 2-1 for a long stretch of the opening five minutes.

The deadlock was finally broken by Walshe, who drove inside for a great finish, but Romania replied almost immediately. The pace of the game suddenly intensified, and a bucket from Simone O’Shea leveled proceedings at3-3.

Two quick scores from Romania had them back in front (5-3)and a good steal from Alex Mulligan saw Ireland’s Ciara Bracken close the gap back to one.

Again, Romania had an answer, and stretched the margin back to two points almost immediately, while Bracken and Walshe continued to penetrate the defence to keep the game in the melting pot up until the final minute.

Momentum swung firmly in Romania’s favour as the clock ticked down, and despite a huge block from Bracken, they went on to score a further three points to win out 9-6 in the end.

Speaking afterwards, Ireland’s Simone O’Shea reflected on the game: “We are really disappointed with that loss, we did some good things and we can build on this for the next game."

Also speaking after the game Ciara Bracken added: "We could have won the game, we played really well, our defense was good and we kept them to nine points but we just didn’t score enough. We are looking forward to the next game."

Ireland will hope to bounce back this afternoon when they take on Belgium later today.

The Ireland Under 18 men’s 3x3 team made it three wins from four at the Europe Cup qualifiers where they proved far too strong for Andorra in the final game of the group.

Darragh O’Sullivan opened the scoring for Ireland but Andorra soon drew level with a basket of their own, before Ireland assumed control with baskets coming from James Beckom and O’Sullivan to lead 3-1.

Andorra came back at Ireland and they would get back within a basket at 4-3, that would be as close as they got. Ireland were much stronger and physical than Andorra. This would soon show on the score board as David Murray scored and then a super two pointer from O’Sullivan put Ireland in control as they lead 10-4.

Ireland continued to dominate around the court and showed off some fancy skills. O’Sullivan, Murray and Beckon all got further baskets as Ireland controlled the final stages of the match.  They went on to win comfortably placed themselves well in the hunt for a semi final spot.

The Ireland Under 18 men’s 3x3 team got back to winning ways with a comprehensive win over Switzerland on Saturday morning, as they proved too strong for the Swiss down the stretch.

Ireland started brightly as they opened a 3-1 lead early on, with James Beckom among the early scorers for Ireland. Despite the early lead for Ireland, the Swiss soon settled and brought the sides level at four points apiece with just over four minutes to play.

Baskets from Beckom and David Murray gave Ireland the advantage once again though, and they retook the lead by three points, and didn’t look back from there.

The dominance of Ireland in the final four minutes ensured the win for the boys in green, with super scores from Darragh O’Sullivan and Cian Heaphy. They were dealt a blow though when Beckom was taken off injured, but they kept their composure to see home a 17-7 point win.

Speaking afterwards, Ireland's David Murray reflected on the game: “We started slow in the first three minutes, as we only scored three points, but we set ourselves up nicely for the Andorra game and hopefully we can get another win.”

Ireland will face Andorra later this evening in their final group game.

The Ireland Under 18 men’s 3x3 team were unlucky in their second game of the FIBA 3x3 Europe Cup Qualifiers as they lost out to a strong, physical German side.

Once again it was a slow start for Ireland as Germany collected scores in the early minutes of the game going 3-0 before David Murray found the net to get Ireland off the mark. There was a new level of intensity seen in this game compared to their earlier encounter as Germany’s Max Stölzel dominated with his sheer size and athleticism.

Ireland kept a solid and tight defence but the physicality of the game was apparent as both teams fell into early foul trouble. Despite some great scores by Beckom and O’Sullivan, the Germans made life difficult for Ireland forcing them to take awkward outside shots. As Germany stretched their lead to 15-9 with just over two minutes to go, Beckom sank two two-pointers to bring hope back to the Irish. Unfortunately, it wasn’t enough as Germany reached the 21-point mark before the clock ran out making it Ireland 13 Germany 21.

James Beckom reflected on the game, “It was a difficult game, we started very badly and that’s what killed us. They were a very physical and hurt us inside. We got better towards the end of the game and we started making the shots as we knew we couldn’t take it inside because they were too big for us. We are looking forward to tomorrow and I think we can win both games.”

The Ireland Under 18 men’s 3x3 team put in a superb display in their opening game at the FIBA 3x3 Europe Cup qualifiers this morning as they stormed past Ukraine with a 19-15-point win in Bari, Italy.

It was a slow start for the boys in green as Ukraine opened up the scoring going 2-0 ahead in the early minutes of the game, however a score by Darragh O' Sullivan followed by one from David Murray brought the Irish level. There was very little separating the sides as a game of cat and mouse ensued, with both teams drawing level multiple times.

Despite temperatures reaching an intense 28 degrees, Murphy and Heaphy brought even more more heat on to Ukraine as they netted shot after shot keeping Ireland in control. Powerhouse James Beckom proved to be thorn in the side for the Ukrainian defence as he kicked it into gear in the final few minutes of the game with solid drives to the basket. As the clock ticked down and with the Ukrainians in foul trouble, it was clear Ireland were in the driving seat. Two free throws from Darragh O’Sullivan brought the score line to 19-15 with three seconds to go, sealing the win for Ireland.

A delighted Cian Heaphy reflected on the game: “It’s a great feeling and it’s great to be back on the court again and I regained some confidence. It was a great team performance. We went down early at the start and we picked ourselves back up and didn’t let the lead slip after that.”