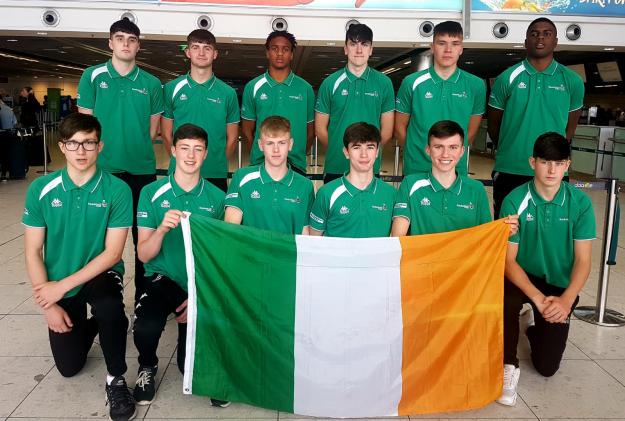 The Ireland U16 men’s team travel to Czech Republic this week where they will play a series of international friendly games against the hosts. Mike Lynch's side will be looking for a positive outcome for the boys in green as they gear up for the European Championships that will kick off on the August 9th in Sarajevo, Bosnia and Herzegovina.

The Irish U16 Men’s team arrived to the Czech Republic on Tuesday to play a two game series with the host nation. The team had a light morning training session with the first game tipping off at 4pm with temperatures hitting the mid 30’s.

End of Q1 for Irish U16 men and it’s all tied up 14 apiece against a savy Czech Republic side #GreenShoots @irishrail #COYBIG pic.twitter.com/l8SCaP4NLs

The game, as expected, was played at a high intensity from the start with the Irish team struggling to match up with the size and physicality of the Czech team. The Czech’s executed their sets well and punished Ireland with 6ft 8” Kocab scoring at ease in the paint. Ireland struggled with poor execution off their sets in offence and unforced errors gave the Czechs some easy points. Coach Lynch made some substitutions with O Donoghue and Ebose coming into the game and immediately made an impact. Ebose had some great steals and finished with strong drives giving Ireland some much needed points, while O Donoghue hit a big three off a set play. Ireland went into the dressing room at the half down three with a score line of 29-26.

The temperature in the dressing room at half time was a lot hotter than outside. Coach Lynch emphasised the need to stick to our system and take better care of the ball and above all communicate on defence. Lead by their captains Fulton and Lenihan the Irish came out like a different team in the third quarter. Intensity of the Irish defence caused the Czechs to turn the ball over on numerous occasions with two shot clock violations. Keating controlled the game well with his ball movement which led to some really nice scores from Fulton on the perimeter and Buivydas in the paint. The Irish held the Czechs to five points in this quarter and went into the fourth quarter with a 10-point lead. The last quarter was played with the same power and force, the Czechs made a run in the last five minutes of the game with a full court pressure, but the Irish kept their composure and finished the game with a winning shoreline of 55-65.

Ireland takes to the court again tomorrow against the Czechs at 10am.

After Wednesday evening’s opening game win against the hosts, the Ireland Under 16 men’s team knew they were in for a tough response from the Czech Republic in the second game today. A sluggish first half saw the Irish squad punished by the home team’s prolific shooting on the perimeter and their dominance inside put the Irish into early foul trouble.
Ireland went into the dressing room just one point up at half-time.
Defence was key for the boys in green in the second half as the third quarter saw the hosts begin to dominate again. Foul trouble continued and Ireland soon were down by eleven points. They closed the gap back as the quarter ticked down and going into the last, the Irish team dug deep and hussled on defence, forcing Czech turnovers which resulted in some great fast breaks for the Irish.

WATCH: CJ Fulton reflects on the U16 men’s two in a row win over the Czech Republic this morning #GreenShoots #COYBIG @irishrail pic.twitter.com/1YVokvdqtv

Some big threes from Ireland in the closing minutes saw them retake the lead by one point and, with seven seconds to go, they sealed the win from the free throw line.

Speaking after, Coach Lynch said: “I’m very proud of this group and now, we’re really looking forward to the European Championships next week.”