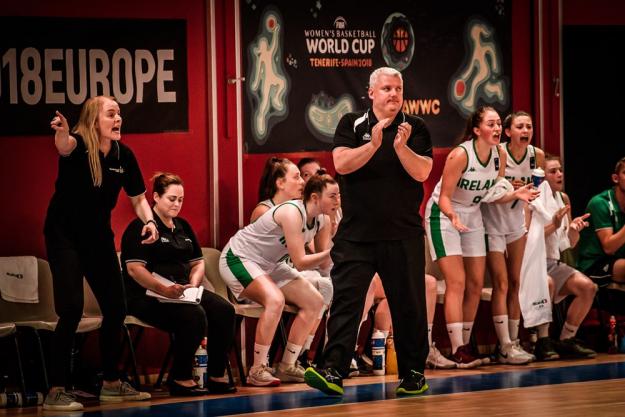 While the scoreline may not have gone their way, the Ireland Under 18 women’s team can certainly hold their heads high this evening as they held their own against group leaders, France, in a hugely promising performance in their final group game at the FIBA Under 18 Women’s European Championship Division A in Udine, Italy.

The girls in green were up against it from the off, with France coming into the game off the back of two big wins over Russia and Poland, while Ireland came in to the clash on the back of two losses to the same opposition. However, the Irish were more than ready for the challenge and after a shaky opening quarter, which saw them trail 7-23, a huge defensive performance from the girls in green paved the way for some fantastic scores from Dayna Finn, Bronagh Power Cassidy and Katie Williamson in the second quarter to see the half time score at 20-40 in favour of the French.

Undeterred by the French's speed and size, there were big performances across the board from the Irish, which saw them work well in the face of the more experienced and physically stronger French. Some well-worked scores in the third quarter along with some big blocks helped to keep the French from opening up too much of a lead on the board as Ireland began to really hit their stride.

A big fourth quarter from the Irish saw them keep the French to just seven points, and they won the quarter 9-7, thanks to superb defense from Maeve Phelan and Maeve Ó Séaghdha with scores from Enya Maguire, Power Cassidy and Ó Séaghdha helping to keep the board ticking over. However, the French had already caused the damage on the board, and ran out 39-62 point winners in the end to top Group D.

Speaking afterwards, a happy head coach, Patrick O'Neill stated: “After a very tough start where we struggled to come to grips with their length and speed, I felt we settled into the game a bit better in the second quarter. We still struggled offensively at times, but I think defensively we really stepped up from where we were yesterday and didn’t let the game get away with us. Winning the final quarter was great!"
Ireland now meets the Czech Republic in the Round of 16 on Wednesday, August 8th at 1.15pm (Irish time).