RECAP: Pacey Czechs prove too strong for Ireland Under 18 women

RECAP: Pacey Czechs prove too strong for Ireland Under 18 women 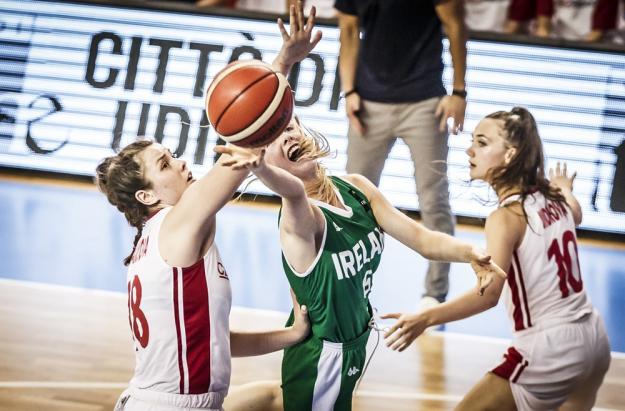 A blistering second quarter from the Ireland Under 18 women’s team just wasn’t enough in the face of a pacey and well-oiled Czech Republic machine, as the girls in green lost out 71-37 in their Round of 16 clash this evening at the FIBA U18 European Championship Division A in Udine Italy.

A tough opening quarter showed the Irish exactly what they were up against, as the Czechs moved the ball at speed to get some nice open looks, with Katerina Frgalova and Anezka Kopecká punishing the Irish the most to see them into a 24-6 point lead at the end of the first quarter.
The Irish really hit their stride in the second quarter, with superb defense setting them up well at the other end with Dayna Finn, Katie Williamson and Bronagh Power Cassidy dropping in some well-worked scores. Brilliant work from Nicole Clancy, Annaliese Murphy and Enya Maguire saw the Czech guards put under big pressure, while good work inside from Maeve O'Seaghdha, Niamh Masterson and Ella McCloskey saw the gap closed to 35-22 in favour of Czech Republic, with Ireland winning the quarter 11-16.

A strong regroup by the Czechs at half time though saw them come out strong in the third quarter. Kopecká added more to her tally as Ireland struggled to get back to the pace of the game. Some turnovers gifted Czech the ball and suddenly, the gap begin to widen on the scoring and by the end of the quarter, they had stretched their lead to 20 points, 51-31.

A tough closing quarter followed, with Ireland managing just six points in the period. Big defence from the Czechs helped see them put the game to bed, while despite the best efforts of the girls in green, including good work by Lynn Tunnah, Eve Nealon and Maeve Phelan, shots just stopped dropping for them and they lost out 71-37 in the end.

Speaking afterwards, head coach Patrick O’Neill stated: “We had a poor start to the game. I felt we really struggled to get into rhythm in the first quarter. I thought as the second quarter developed though, we were much more composed, we executed better and got into our actions quicker. To be only 13 points down at half time was a reflection of a stronger more composed second quarter for us.

“But the second half - we just really struggled. We gave up too many easy looks and turnovers started to creep in and become an issue. Their transition game - which we knew coming into the game was very effective – was strong again, and they found their rhythm in that. There are definitely positives, the girls were fantastic, I cannot fault their effort, and now we’ve a big game ahead of us tomorrow.”