RECAP: Disappointment for Ireland as Italy win out in end

home / news / RECAP: Disappointment for Ireland as Italy win out in end

RECAP: Disappointment for Ireland as Italy win out in end 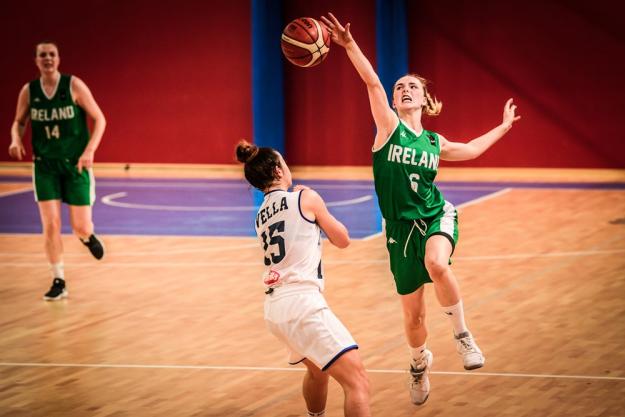 There was disappointment for the Ireland Under 18 women’s team this evening as they lost out in the closing minutes to hosts Italy 64-54 at the FIBA U18 Women’s European Championship Division A.

Indeed, the ten-point full time scoreline flatters the hosts, with foul trouble down the stretch for the Irish sending the home side to the free throw line on numerous occasions to stretch out a lead that had been hovering under five points for the majority of the final quarter. A combined 26 points from co-captains Dayna Finn and Bronagh Power Cassidy coupled with superb defense across the board and big shooting from distance by Enya Maguire just wasn’t enough in the end.
The loss now means that Ireland has to win their final two games (Saturday and Sunday) in order to stay in Division A basketball next year, with three teams being relegated back to Division B.

A slow start from the Irish saw the Italians take an early 9-2 lead midway through the first quarter, but they soon found their rhythm with big scores from Finn and Power Cassidy helping to close the gap, and Italy held a slim two-point lead, 14-12, at the end of the first. Buoyed on by the superb support in the arena, the Irish continued to work hard in the second quarter, with reward coming when a huge three pointer from Maeve Ó Séaghdha put them into the lead. They kept the pressure on the hosts, and it was a number of minutes before two quick steals led to two easy scores for the Italians to see them retake the lead heading towards half-time, and they stretched it out to have a 32-26-point cushion going in at the break.

Italy came out flying after the break, and had opened up an 11-point gap on the scoring as the third quarter ticked down. The Irish were not to be deterred though, and huge scoring from Ella McCloskey, Power Cassidy, Maeve Phelan and Enya Maguire closed the gap to eight (49-41) going into the last.

The fourth quarter was certainly not for the faint-hearted though, as Ireland – with the roar of the supporters drowning out the hosts – began to drive hard at the Italians. Maguire was on song again to close the gap back to six by the midway point and points from Phelan and Nicole Clancy suddenly brought the game back to three points with 1.38 on the clock. The hosts kept their composure though and put in a huge effort under the boards to earn their next two points, and with Ireland on team fouls, added more to their tally in the closing seconds from the free throw line to win out by ten points in the end.

Speaking afterwards, head coach Patrick O’Neill stated: “That was an unbelievable effort from this team, they left everything on court and did everything we asked them to do. I felt it was the first game of the tournament where we showed that we can absolutely compete at this level. So many times during this game, looking up at the balcony the Irish support was drowning out the home town crowd – and that was unbelievable
“We’ve a big ask ahead of us now as we have to win the next two games to stay in Division A. Sweden, who we play next, is a very good team and will be a tough game for us Saturday. But we will regroup and focus on trying to get the two wins that we need now to stay in Division A.”