RECAP: "History was made tonight and we're not done yet!"

home / news / RECAP: "History was made tonight and we're not done yet!"

RECAP: "History was made tonight and we're not done yet!" 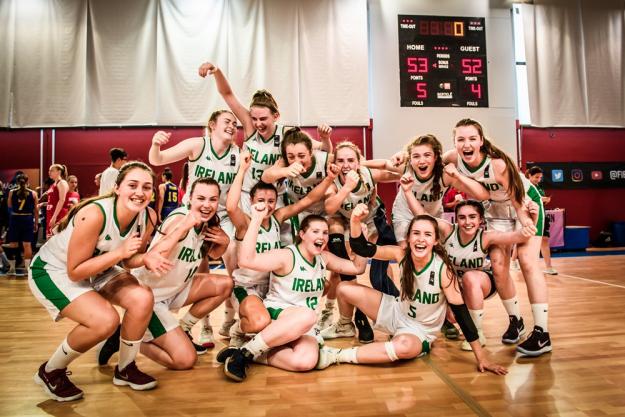 “A little bit of history was made tonight – and we’re not done yet!” Ireland U18 women secure first ever Irish Division A win

Another piece of Irish basketball history was written this evening as the Ireland Under 18 women won their country’s first ever Division A basketball game and kept their hopes of retaining top tier status alive with a 53-52 point win over Sweden at the FIBA Under 18 Women’s European Championship Division A in Italy.
Today’s win was not only Ireland’s first ever win at Division A, but now propels them forward to a final battle to retain their Division A status tomorrow (Sunday) in a winner-takes-all showdown against Bosnia and Herzegovina.
Dayna Finn delivered an incredible performance to drive Ireland over the line with a whopping 22 points, and it was apt that the Mayo woman was the one with the winning basket at the death for her team.
Indeed, it was an all-round superb team performance, with enormous contributions off the bench as well, and head coach Patrick O’Neill was still stunned after the final buzzer.

First ever win in Division A @fiba and survival for 24 hours. Maybe a whole year! #GreenShoots pic.twitter.com/8JwZk0OLNM

“A little bit of history was made tonight – and we’re not done yet. I’m so unbelievably proud of this team!” he said. “The effort the girls put in was phenomenal. They dug deep and showed such resilience and mental fortitude to come back and take control - and of course, to get us our first ever win at Division A. The fans were amazing, to hear the singing as soon as we stepped on court was huge.”

It was an intense game right from the off, with scores at an absolute premium, with neither side breaking the deadlock until over four minutes had been played. Scores from Finn and Katie Williamson followed, before Maeve Phelan released a superb buzzer beater at the end of the quarter to see Ireland lead 10-8.

An even tighter second quarter followed, as Sweden retook the lead early, and the sides matched each other score for score as the clock ticked on. Bronagh Power Cassidy brought the sides level, before a score from Niamh Masterson again gave Ireland the edge at the end of the quarter, to lead by the minimum going in at half time, 20-19.

HISTORY FOR @BballIrl , as the #Greens win their 1st-ever Division A game and live to fight for survival tomorrow !

The third quarter continued in the same vein, with nothing separating the sides. A huge three from Annaliese Murphy helped keep Ireland’s nose in front, before four quick points from Finn and a superb finish by Maeve Ó Séaghdha sealed the advantage at 40-29 at the end of the third.

The early exchanges of the fourth quarter saw Ireland gain more traction, with some nice shooting early on. However, comeback queens Sweden weren’t going down without a fight, and with just under five minutes to play, they suddenly had it back to a three-point game (45-42). Two minutes later, the game was all square once more, and foul trouble for the Irish saw Sweden take the lead from the free throw line with just two minutes left. Superb play from Ella McCloskey and Finn sent Ireland ahead (51-50) with 41 seconds to play and Irish fans everywhere could barely watch as the remaining seconds began to tick down.

A steal and a lay-up by Sweden seemed to have dashed Irish hopes with 10 seconds to go, but a superb inbound from Enya Maguire found the hero of the hour, Dayna Finn, and she drove with style to the basket for that all-important winning score and the arena erupted as the full time buzzer sounded with Ireland ahead by the smallest of margins, 53-52.

The battle is far from over for the team however as they now face a winner takes all clash with Bosnia and Herzegovina tomorrow afternoon. The winner will retain Division A status for another year, while the loser of the game will be relegated back to Division B.