RECAP: Late comeback not enough for Ireland U18 women

RECAP: Late comeback not enough for Ireland U18 women 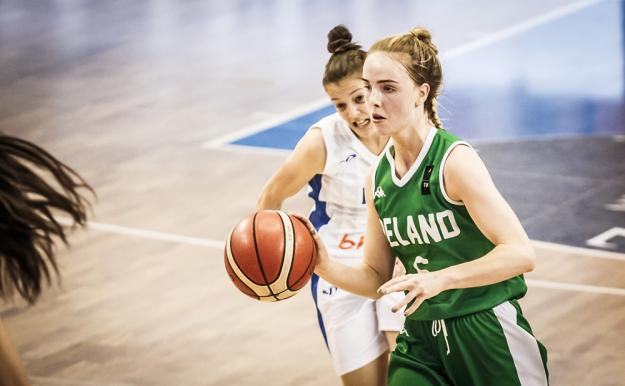 RECAP: Late comeback not enough for Ireland U18 women as they bow out to Bosnia and Herzegovina

A late fourth quarter comeback by the Ireland Under 18 women’s team was just not enough for the squad to maintain their Division A status this afternoon, as they lost out 63-71 to Bosnia and Herzegovina at the FIBA Under 18 European Championship Division A.

Coming into today’s game off the back of a massive win against Sweden yesterday, Ireland knew that it was going to be a tough challenge with a long and physical Bosnia side waiting in the wings. A superb closing ten minutes from the girls in green just couldn’t get them over the line as time was against them, and the buzzer sounded to end Ireland’s journey in Division A.
A massive opening quarter from the Irish saw huge scores from Dayna Finn, Enya Maguire and Ella McCloskey, before Katie Williamson edged Ireland ahead with a well-taken jump shot. A huge score from Maeve Ó Séaghdha tied the game up at the end of the quarter, 20-20.

A fast-paced and intense second quarter followed, with Finn and Ó Séaghdha once more on target from distance, while big defence from Annaliese Murphy and Niamh Masterson – the latter also netting a superb three pointer - kept the Bosnia threat in check. Huge scoring from Bosnia’s Ksenija Mitric and Andeli Gligic though edged them ahead at the half time buzzer to lead 35-43.

The third quarter is where things started to unravel for the Irish, as Bosnia started the period in blistering fashion, opening up a 35-50 point lead within the opening minutes. Every shot they took dropped for them, while Ireland struggled to get a score to fall, and the tough press forced them into turnovers and mistakes, to see Bosnia outscore them 4-17 in the ten minute period, to lead 39-60 going into the last.

There was a mountain to climb going into the fourth quarter, and this was where Ireland truly showed their grit. Led on the comeback by a determined Bronagh Power Cassidy, Ireland slowly began to chip away at the margin. Huge shooting from Enya Maguire began to close the gap, as McCloskey, Maeve Phelan and Nicole Clancy all worked tirelessly on defence. Back to within eight points with just over a minute to play, Ireland certainly had the belief they could finish it through, and a massive three-pointer from Maguire with just 58 seconds to play suddenly made it a five-point game.

Foul trouble for the Irish sent Bosnia to the free-throw line in the closing stages though, and unfortunately, time just run out and on a thrilling closing quarter and Ireland’s hopes of Division A basketball, as Bosnia and Herzegovina held on to win 63-71 in the end.

Speaking afterwards, head coach Patrick O’Neill stated: "I’m so proud of how the girls performed today. Apart from a bad third quarter, we played some of the best basketball of the tournament. The team has been phenomenal and the support has been second to none. These girls have proved that we, as a nation, can compete at this level. So watch out Europe, Ireland is coming."

It’s all over in Italy and despite a superb Q4 comeback, it finished Ireland 63-71 Bosnia and Herzegovina. Hard luck girls - what a journey you’ve brought us all on #FIBAU18Europe #GreenShoots
WATCH :https://t.co/5hxHRimZE0
BOXSCORE : https://t.co/fUuI5HIZN9 pic.twitter.com/MQQj3UVzG9