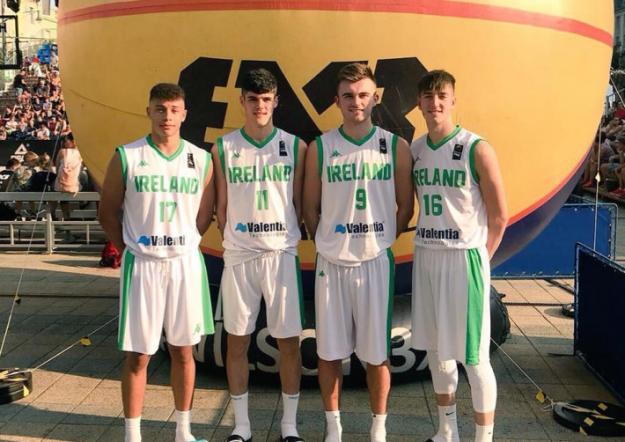 “The boys have made a huge commitment to this team. They’ve learned a lot - as have I - from our last experience at the qualifiers, and while they did superbly well over there, there were some areas that we knew we had to be better at - and that’s what we have worked at," said head coach, Paul Kelleher.

“Now, we look sharp, we look ready and all we can do now is give it everything we have, play with no fear and see where it takes us.”

The Ireland Under 18 men’s 3x3 team were introduced to the FIBA U18 men’s 3x3 Europe Cup with a bang by Russia this evening as they lost out 22-10 to a speedy and skilful Russian side in their opening game of the competition in Hungary.

Indeed, Russia – who came first in the qualifiers in France – put on a dazzling display, wowing the crowd with a dunk-filled feast of 3x3 basketball and the Irish lads certainly put up a superb display in the face of one of the tournament favourites.

James Beckom got the scoring underway for the Irish with a nice crossover sending him to the basket to finish off his left, but within seconds, big offensive boards from the Russians saw them tie the game. A fantastic bounce pass and finish through the Irish defence sent the Russians into the lead and they wouldn’t look back from their, opening up a 4-1 lead with just over two minutes played. Both Beckom and David Murray were unlucky in these early exchanges, with their well-worked moves just not finding the target, but Cian Heaphy soon rectified that, dunking his way home to a fantastic score with seven minutes to play.

All the angles of Cian Heaphy’s dunk for Ireland at the FIBA #3x3u18 Europe Cup in Hungary this afternoon #GreenShoots pic.twitter.com/e1HYW4gupz

Russia responded in style, adding three more points, before a nice kick-out from Beckom found Murray on the baseline and he slotted home to pull the score back to 7-3. Russia replied almost immediately, before Darragh O’Sullivan got on the scoring with a well-taken shot, and he followed this up less than 30 seconds later with a huge two-pointer to cut the lead back to four points (10-4). A massive score from Russia was the response though, and they added a bonus from the free-throw line to stretch it back out to seven points.

Indeed, they could have added more but for a huge Heaphy block at the midway mark, and this momentum carried through once more for a nice link up between Beckom and Murray to see another score for the Irish to make it 14-8.

The speed and pace of the Russians though kicked up yet another gear, and they really put on a showcase, adding score after score as the clock ticked down, eager to get to that 21-point mark before the buzzer. Another long two-pointer from O’Sullivan was the last say for the Irish as the Russians went over target before the clock ran down to win out 22-10 in the end.

Next up for the Irish is France, who they meet at 6.30pm (Irish time).

Foul trouble ultimately saw Ireland lose out to France in their second group game, as with 4.19 still on the clock, they found themselves on team fouls and France certainly capitalised from the line.

In a nail-biting clash, France got the opening points on the board before a nice two-pointer from David Murray tied the game with just under two minutes played. A big score from Heaphy followed to put Ireland in the lead and Beckom scored from the free throw line to increase the gap. A huge long range score from Darragh O’Sullivan saw Ireland open up a four-point lead (2-6), before France pulled back three points quickly, one from a nice reverse lay-up and two more from the free-throw line as Ireland’s foul woes began.

O’Sullivan responded with yet another fantastic two-pointer, but again, a nice move followed by a free throw from the French put them right back in touch to close the gap to one-point once more.

Ireland hit the team foul mark with 4.19 left to play, and had a moment’s respite when both of France’s following free throws failed to hit the mark. Just seconds later though, they were back on the bonus line, and made sure of these two free throws to take the lead, 9-8.

A lovely pass through from Darragh O’Sullivan found David Murray behind the French defense to tie the game back up, and though France responded immediately, Cian Heaphy was on hand to level proceedings once more from the free throw line.

Yet another brilliant long-range shot from O’Sullivan edged Ireland back into the lead with just three minutes remaining. France were relenteless in their response though and took the lead once more, before O’Sullivan dunked home a minute later to cut their lead to just one, 14-13.

That was to be the last action from the Irish though, as France edged further ahead with two well-worked scores, and punished further with two closing free-throws to win out by five in the end.

Speaking afterwards, Ireland head coach Paul Kelleher stated: “The lads gave everything they had and that’s all you can ask for. 3x3 is a completely different game and these boys did everything they could to adapt and competed against some really high level teams – and these four boys showed they belong right up there with them all.

“They have given everything for their country over the last few years and have had a decorated international career to date. For that, I, the association and the entire basketball community should be very proud of them and I have been blessed to have been able to stand beside them.”