Marist win the Samson Bracket on Day 2 at Belfast Classic 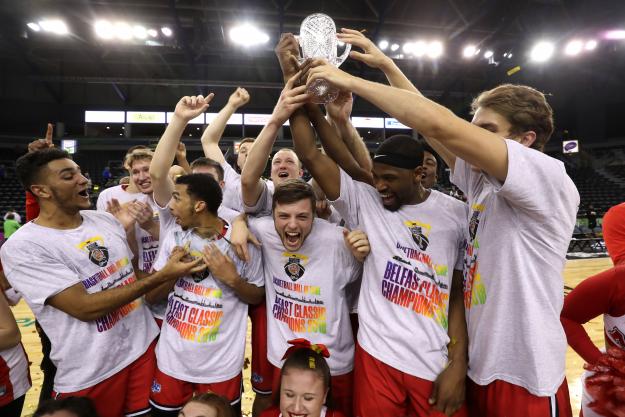 The Samson Bracket Consolation Game was a great beginning to the gameplay for fans this evening and saw Dartmouth College steal the win from Albany by 14 points. The evening’s finale Samson Bracket Championship Game saw Marist College named Champions and awarded the first Belfast Classic Cup of the 2018 tournament.

Speaking on their team’s victory, Marist’s head coach John Dunne stated: “We’re really excited about the win. I know we controlled the game from start to finish…the guys played with great passion and desire and poise. The finish could have been a little cleaner but at the end of the day winning any kind of tournament is a majorly positive. We’re really happy…and we had some fans here in Belfast that we put some smiles on their faces. We have a great fan base.”

Later in the afternoon the second and last spot in the Goliath Championship Game was secured by University of San Francisco, who sailed to victory with a 76-58 score against Stephen F. Austin State University’s Lumberjack team.

Marc Mulholland, Executive Director of the Basketball Hall of Fame Belfast Classic remarked on the second day of outstanding, high-scoring games, saying, “I’m delighted that the Tournament has been a resounding success so far, with gameplay today even more impressive than yesterday! It’s great to see such an enthusiastic turnout of supporters from around the world over the last two days and we only hope tomorrow’s Goliath Bracket Finals attract even more visitors to the SSE Arena to experience an extraordinary level of college basketball!”

Today, Saturday, December 1st, will see the Basketball Hall of Fame Belfast Classic come to an end for another year, with the Goliath Bracket Finals gameplay beginning at 1.00pm as Stephen F. Austin State University and University of Wisconsin-Milwaukee fight it out in the Consolation Game. Following this, the tournament will reach its pinnacle for the weekend with the final game featuring the University at Buffalo