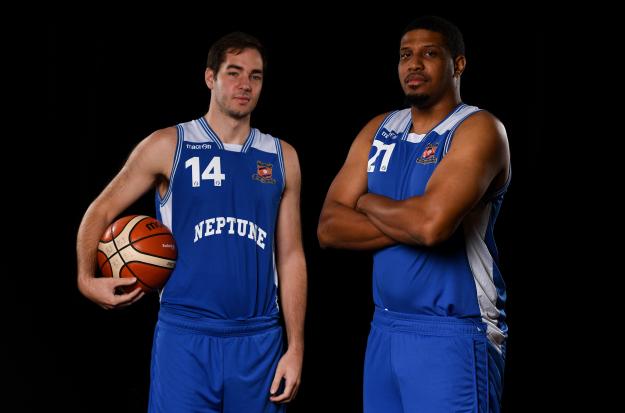 Templeogue lead the way at the top of the Men’s Super League today after a thrilling 81-83 point victory over Belfast Star this afternoon.
It was Star’s second game of the weekend having overcome Pyrobel Killester in nail-biting (92-88) fashion on Saturday evening as part of an action-packed two days of top of the table action. Today’s game saw them stage a late comeback against the Dubliners to see the game in the melting pot right up until the final buzzer, with Neil Randolph and Stephen James getting some crucial scores at the death for Templeogue to send them home to victory. Templeogue’s American, Dee Proby, was also one of the standouts on the day, finishing the clash with 21 points. Speaking afterwards, Templeogue head coach Mark Keenan said: “It was such an intense battle. We had a ten-point lead but Star fought until the end and I’m just relieved that we came out on the right side.”
Elsewhere, it was derby weekend around the remainder of the Men’s Super League with C and S Neptune getting the big result of the weekend, edging UCC Demons 88-91 in a hotly-contested clash at the Mardyke Arena. Neptune boss, Paul Kelleher reflected, “This is a fixture that Cork basketball and the Men’s Super League needs and it’s good to see people coming out and giving us the support we need on a Friday night.”
Garvey’s Tralee Warriors meanwhile came out 68-77 point victors over local rivals Keane’s SuperValu Killorglin in a big Kerry derby that truly lived up to its billing. Tralee’s Jordan Evans top-scored with 18 points in an excellent all-round performance. Warrior’s coach Pat Price spoke after the game, “I was very pleased with our second half performance. In fairness to Killorglin, they have a lot of talent but we were very focused today and it’s a great start to the second half of the season."

Maree gained bragging rights in the second Galway derby of the season running out 86-79 victors over Moycullen in Calasanctius on Saturday thanks to a 31-point display from American, Sean Sellers. After the game, Maree head coach Mike Lynch said, “We really had to capitalise on what we work on in training. I feel we lose focus for a certain period of time but we used the bench until we found a fluid motion that saw us out in the end.”

The last derby of the weekend saw DCU Saints run out 76-71 point winners over UCD Marian with Kevin O’Hanlon having a standout game for DCU, scoring 21 points as the north siders weathered the storm of their south side counterparts

Over in the Women’s Super League, Courtyard Liffey Celtics got 2019 off to a bang as they maintained their unbeaten run with a 65-73 win over Maxol WIT Wildcats. Allie LeClaire led the scoring for Celtics with 28 points in an extremely close affair, with the visitors just managing to stretch the lead out in the fourth. DCU Mercy also continued their impressive winning streak, defeating IT Carlow Basketball 39-65 on the road on Saturday to keep the pressure on Liffey Celtics at the top of the table. Sarah Woods top-scored for the Dubliners with 19 points as they controlled the game from start to finish. NUIG Mystics’ woes continued this week as they lost out to Fr Mathews at home, 51-68. Sisters Niamh and Grainne Dwyer contributed 30 points between them for the visitors to see them home to victory.
Indeed it was wins all round for the Cork teams, as a 21-point display from Aine McKenna helped Ambassador UCC Glanmire home to a 58-79 point victory over Marble City Hawks on the road, while Singleton SuperValu Brunell defeated Pyrobel Killester, 72-66, in a fast-paced and competitive game at the Parochial Hall on Sunday. Linda Rubene top-scoring the hosts home to victory.

Tradehouse Central Ballincollig’s undefeated run at the top of the Men’s Division One came to an end on Saturday evening as they lost out 85-96 at home to KUBS. KUBS’ Elijah Tillman was the difference on the night, hitting a whopping 44 points in a superb performance that saw him dominate inside.

DBS Éanna are now the only unbeaten team remaining in the Men’s Division One after they defeated Limerick Celtics 58-90. Neil Lynch scored 27 points for the Dubliners in a huge winning effort, indeed, it was wins all round for the Dublin teams in this opening weekend of cross conference games, with Abbey Seals Dublin Lions recording a big 66-91 point victory over LIT on Saturday with Igor Markiewicz dropping 25 points on the night. Bad Bobs Tolka Rovers were also victorious, running out 72-89 point winners over UL Sport Eagles in Limerick. Despite a whopping 39-point display from Tarchee Brown, it was not enough to get them to victory.

Elsewhere, EJ Sligo All-Stars secured a huge 67-74 victory over IT Carlow Basketball on the road on Saturday, launching a big comeback to see them home to glory.  Scotts Lakers St Paul’s Killarney meanwhile recorded a 95-70 win over Gamefootage.net Titans in Killarney with Mark Greene leading the charge with 22 points. Waterford Vikings got another win under their belt on Saturday, recording a 77-51 victory over Ulster University Elks after an impressive team performance in Waterford, led by Craig O’Neill on 19 points, while on Sunday, a 35-point performance from American Mike Pierre helped Portlaoise Panthers home to a 95-78 point win over LYIT Donegal.

Maree maintained their unbeaten record in the Women’s Division One with a whopping 97-46 victory over UL Huskies in Oranmore on Saturday. Dayna Finn and Claire Rockall starred for Maree scoring 21 and 18 points respectively.

Trinity Meteors’ 54-71 victory over Swords Thunder keeps the pressure on Ulster University Elks at the top of the Northern Conference. Meteors recorded their second league victory against Thunder this season, despite playing without Rebecca Raberio. Thunder’s intensity meant that they led for the first nineteen minutes through top scorers, Peggy Black and Tia Kelly Stephens. Sarah Kenny’s performance lifted her into the top scorers as Meteors depth on the bench easily subdued a Thunder team who were exhausted in the final quarter. After losing their Cup game to Elks back in December, Trinity Meteors’ head coach, Vinny O’Keeffe was pleased with his side’s first victory after the Christmas break. “I always hate games after Christmas because you never know what kind of performance you’re going to get. Swords came out firing and we gave ourselves a hole that we had to dig ourselves out of. But they kept with it and kept with it, and by the end of the game we were running strong”.

Ulster University Elks had a dominating 62-88 victory over Fabplus Northwest on Saturday. Kollyns Scarbrough top scored for Elks with a huge 26-point performance, while Phoenix Rockets were 47-71 winners over Limerick Celtics in Limerick on Saturday thanks to Amanda Fioravanti and Amber Deane who scored 31 and 24 points respectively.