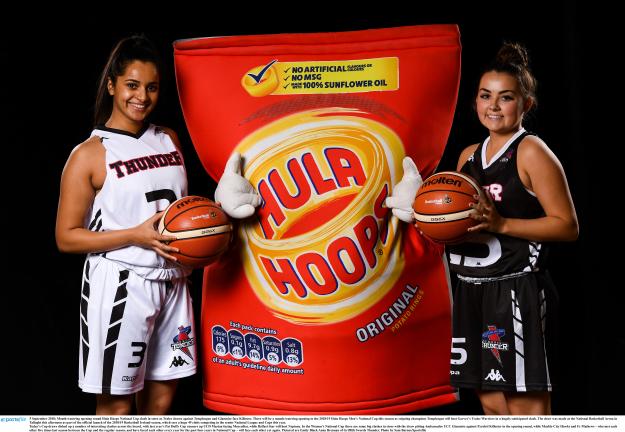 There will be a new name etched on the Women’s Division One National Cup this year after last year’s winners, Fr Mathews, were promoted to the Women’s Super League.

The competition is set to be fierce with two big semi-final showdowns happening at Neptune Stadium on Saturday evening, with the first game of the day at 4pm seeing Maree of Galway face off against Dubliners, Swords Thunder.

For Maree, this is their first year in the National League, but they have certainly made their mark already as they are currently the only unbeaten team in the league, sitting at the top of the Southern Conference with eight wins from eight games. This dazzling run was added to with a solid run through the National Cup competition, which now sees them in the semi-final in their first year. They have a spoil of talent on the team, with Irish internationals Claire Rockall, Dayna Finn and Maggie Byrne some of the ones to watch on the day as well as Alison Blaney and Fiona Scally.

Looking ahead to the game, Maree head coach, Joe Shields stated: "We are really excited to be part of the weekend in Cork. To reach a semi-final in our first year is great for the club. The team are working hard and will be giving it their all.”

Swords, for their part, are looking forward to their second Hula Hoops National Cup semi-final in as many years, having joined the National League for the first time last season. Last year, they were knocked out at the semi-final stages of the Cup and are hoping to go one step further this weekend. They met Maree in the league in Dublin back in October and lost out to the league leaders, 59-88, a scoreline they are hoping to reverse this weekend. Players to watch out for on the day include Peggy Black, Katie Black and Anna Brennan.

Speaking ahead of the game, head coach Joan Black said: “We’re going to Cork and have to focus now. So many other teams would love to have that opportunity so we’re going to do our very best to throw everything we have at it and give a good game of basketball and that’s all I could ask for. We’ve definitely improved since we last played them and we're really looking forward to locking horns with Maree again.”

The second semi-final of the weekend tips off at 8pm and sees Portlaoise Panthers and Ulster University Elks go head-to-head. Both teams are enjoying a solid league run at the moment, with Elks sitting top of the Northern Conference having suffered just two losses to date, while Portlaoise sit second to Maree with just one loss at the hands of the Galway team.

This is set to be a very interesting clash indeed, with both teams also in the Under 20 semi-finals earlier in the day, while Portlaoise as a club have a whopping four teams contesting semi-finals, including their men’s Under 18 and Under 20 teams. Portlaoise will be looking to Irish international, Claire Melia, to help drive their side forward and other key players to watch on the day will be Sinead Melia, Sharon Melia and Jamie Sherburne.

Looking ahead to the clash, Portlaoise’s Peter Duignan said: "We are very excited about the weekend ahead. Elks are a very strong team and we will have to be at our best to come out on top. We are looking forward to a cracker. As a club, it means so much to us to have four teams in the semi-finals. We are growing year on year and it is great to see all the hard work put into the underage structure coming to fruition."

Elks’ for their part have reached their first ever National Cup semi-final, and have a host of young and talented players. Fans should keep an eye out for American, Kollyns Scarbrough, who is one of the leading scorers in the league, Jenna Kaufman, Erin Bracken and Enya Maguire.

Looking ahead to the game, head coach, Patrick O’Neill, said: “It’s a massive weekend for the club. To have both our U20s and our senior women competing in the Hula Hoops National Cup semi-finals is a testament to the work that Deirdre [Brennan] and the Sport Changes Life Victory Scholars have done in our junior club over the past number of years.

“There is a real sense of excitement and achievement in the team and, with the hard work put in over the past month, now we just want to get out there and compete on Saturday. We are under no illusions about how good a team Portlaoise are and we know we will have to be at our best to get a result. “