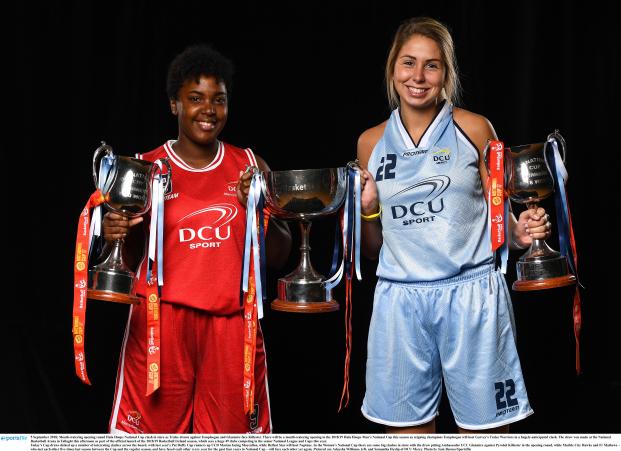 All eyes will be on Neptune Stadium this evening as the first Hula Hoops Women’s National Cup semi-final will tip off at 8.30pm this evening.

This is no ordinary semi-final though, with fans once more being treated to another huge Cork derby as Singleton SuperValu Brunell face off against Fr Mathews. Brunell are well used to the pressure situation that is a Cup semi-final, having contested a number of semi-final showdowns in the last number of years. This year, though, is the year they hope to make that breakthrough through the semi-final hump, and book a coveted spot in the National Cup final.

Players to watch on the day will be Linda Rubene, Danielle O’Leary, Madelyn Ganser and Amy Waters, and head coach, Tim O’Halloran was looking forward to the challenge: “The team is really up for it. It doesn’t get any bigger than a Cup semi-final in Cork with two Cork teams going up against each other to reach the final.

“Obviously they [Mathews] will be favourites due to the ability and experience of their team but I wouldn’t swap my squad for anyone. It should be a great game and I’m hoping we come out on the winning side of what should be a fantastic clash.”

The two sides have met already this year in the Women’s Super League in a nail-biter, with Mathews just pipping it by two points at the death. Indeed, Mathews are no strangers to Cup tests, having won the Women’s Division One National Cup last year and have some huge experience in Niamh and Grainne Dwyer, Chantell Alford and Shannon Brady. Now in their first year up in the Super League, they are relishing the challenge that this weekend brings.

“We’re really looking forward to the challenge,” said head coach, James Fleming. “No doubt Brunell are overwhelming favourites, but it’s Cup and we’ve a lot of born winners so we’ll give it a shot and see where it takes us.”

On the other side of the draw meanwhile, a battle of epic proportions is waiting as Courtyard Liffey Celtics and DCU Mercy will face off on Saturday evening at 6pm at the Mardyke Arena UCC in one of the other hugely anticipated games of the weekend.

Liffey Celtics currently sit top of the table unbeaten after a 9-0 run so far this season. They have had the better of the sides’ most recent exchange, running out winners over Mercy in Leixlip and will be hoping to avenge last year’s Cup quarter-final loss at the hands of Mark Ingle’s charges. Players to watch on the day include Allie LeClaire, Briana Green, Sorcha Tiernan and Aine O’Connor. Head coach Mark Byrne was looking forward to another showdown with DCU: “We are really excited ahead of this weekend’s Cup semi-final with DCU. The Cup is probably the most exciting and prestigious event and to be involved in the Cup semi-final weekend is great.

“We’ve met DCU in the Cup in both of the last two years and they’ve been great games. We’ve lots of respect for their coaches and players but we are ready for the challenge. We want to be involved in these type of games and we can’t wait now for Saturday to come. For the club in general, it’s great to have three teams involved in the weekend and shows the success of the underage programme of recent years with players coming through.”

Reigning Cup champions DCU Mercy meanwhile will be focusing hard to try and book themselves a spot in the final to defend their crown. They will be relying on Sarah Woods, Aisling Sullivan, Samantha Hyslip and Bronagh Power Cassidy to help them over the line and have five players from their Under 20 team crossing over onto the Super League panel.

“This could be the game of the weekend,” said head coach Mark Ingle. “Liffey Celtics are unbeaten to date this season. It’s a tough challenge for us, especially with the fact that our U20 team play at 12pm with five of the players on our senior squad.”