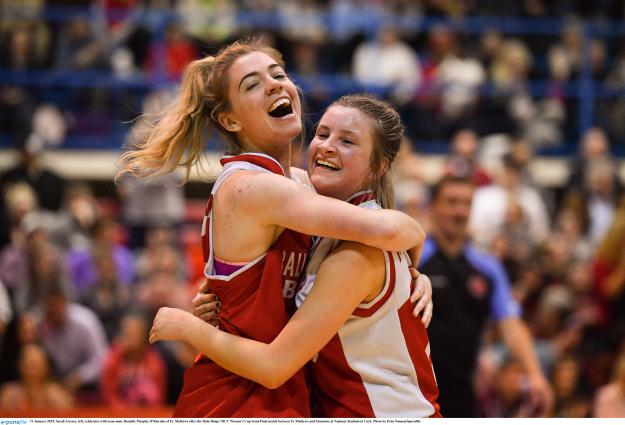 A big win for Glasnevin in Neptune Stadium sees them take on Drogheda Bullets in the Men’s NICC Hula Hoops Cup final in a fortnight’s time.

Glasnevin got off to a strong start in the contest, player-coach Kevin Foley setting the tone with some solid defensive play inside.

Michael Curley posed a threat offensively when he came off the bench, and at the end of the first the north Dublin outfit had earned their 23-8 advantage.

Jonathan Pesaitis came out strong to start the second for Athenry, playing an instrumental role in the Galway outfit’s 9-2 run in the opening minutes of the second.

Athenry continued their run to close the gap to four only for Glasnevin regain control of proceedings and take a 44-27 lead into the break of play.

Glasnevin continued their dominance in the third, some nice ball movement nullifying the zone defence of Athenry and allowing Kevin Foley’s team to pick up some simple scores inside.

Going into the final quarter the score read 66-40, and although Athenry battled in the last, the result of the contest had long been determined.

Kevin Foley was full of praise for his opponents but ultimately was happy to come away with a victory.

“Athenry are a tough side to play against, they make it awkward, they’ve got a lot of young guys who can play the game,” the veteran player-coach said. “You could see from the lads they really wanted to knuckle down and gets stops and our rhythm on offence came from our defensive intensity.”

“I can’t describe the feeling at the minute,” said a thrilled Drogheda Bullets head coach Gerald Kennedy this afternoon after his side drove home to a hard-earned 86-76 point win over BC Leixlip Zalgiris in the Hula Hoops NICC Men’s National Cup semi-final.

“That was a great game to be a part of.  For our club to be here, to be on this stage is fantastic – we knew we could be here.”

It was a game that delivered everything, from a superb display of three-point shooting – Zalgiris hitting 11 before the half, to thrills and spills galore as nothing separated the teams right down until the closing minutes.

Huge shooting from Zalgiris’ Marius Kasperavicius and Andrius Lekavicius saw them take a slender two-point lead in at half time, but a huge third quarter from Bullets saw them retake the lead going into the last, and it was Padraig McGroggan and Janis Assere with the huge plays as the clock ticked down to see them home to a memorable victory despite a superb effort from Leixlip.

Killester’s NICC Women’s team are headed back to the Hula Hoops National Cup final for a second year in a row following a 71-41 point win over East Cavan Eagles.

Their experience showed early on, as they drove into an early 33-17 point lead by half time, settling quicker than East Cavan Eagles. Big scores from Kate McDaaid, Catriona White and Hannah Feerick kept the pressure on Eagles. The second half was a much closer affair, as Cavan came back out of the break ready for battle, with Ciara Tolan, Ciara Brady and Amy Dowd all impressing on the big stage and causing trouble inside for the Killester defense. The damage had already been done though, and the gap was just too big for Eagles to surmount and it was Killester who held on to win.

Speaking afterwards, Killester head coach, Casey Tryon said: “We started off strong, which gave us a good lead into the game and had them playing from behind. I think to be able to start strong was really good, our intensity was up and down throughout the game but overall we did what we needed to do."

“Hopefully this year’s final we’ll be a bit more prepared. We know what we have in Fr Mathews, they played a great semi-final on Friday night so we have some things to work on over the next few weeks.”

Fr Mathews have reached the NICC Women’s National Cup Semi Final after a resounding 59-40 victory over Glanmire. Mathews were led by incredible performances from Sinead O’Mahony and Danielle Murphy O’Riordan, who’s fast pace and tricky scores were too much for Cork rivals Glanmire.

The teams came storming out of the blocks from the get-go. Slowly but surely, Fr Mathews began to take the advantage and gained some quick scores with the help of Danielle Murphy O’Riordan and Eimear Twomey. Jessica Quirke contributed scores for Glanmire to keep them in the game as Fr Mathews led, 20-14 at the end of the first.

The second quarter saw Glanmire stage somewhat of a fightback as they clawed at Fr Mathews’ lead. Scores in succession from Caoimhe O’Driscoll saw Fr Mathews only lead by one point at halftime, 31-30.

The second half was a much more physical affair than the first. There was a rise in fouls committed as both teams drove to the basket in search of scores that would separate the sides. Lesley Anne Wilkinson was accurate from beyond the arc for Glanmire but the fast break of Fr Mathews was hard to stop with Murphy O’Riordan gaining more scores to keep her team in the lead, 44-34, at the end of the third.

Fr Mathews displayed sheer tenacity in the fourth quarter under the guidance of the pacey Danielle Murphy O’Riordan. O’Riordan opened up the Glanmire defence, slashing her way through the key and going up strong under the basket. Fr Mathews were able to see the game out from that point, 59-40.

After the game, Fr Mathews head coach Larry O’Reilly said, “We were able to play with a fantastic structure but also add that little bit of individuality. I was very pleased with our rebounding and I’m delighted to be in the final."