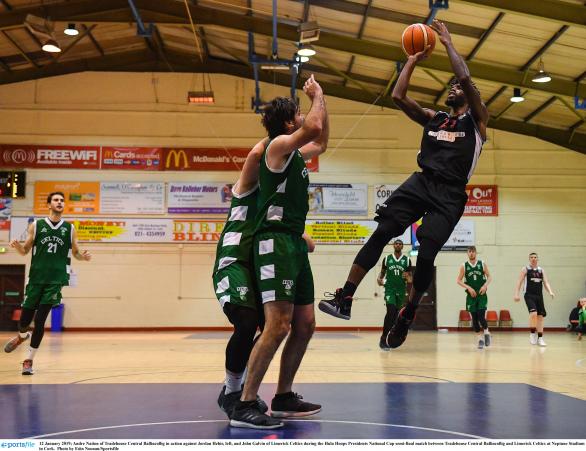 Bad Bobs Tolka Rovers advanced to the Hula Hoops Presidents National Cup Final after defeating IT Carlow Basketball, 77-86, in a highly competitive and tense affair. Tolka mounted a second half comeback and thanks to star Alex Dolenko, pulled away in the fourth quarter to achieve victory.

The game was a battle from the start as Carlow’s Johnny McCarthy and Tolka’s Justin Goldsborough traded scores. Goldsborough caused Carlow problems inside as he registered a couple of blocks early on and was always prominent when rebounding. Aaron Whelan gave Carlow some well-needed scores before he was forced off with injury in the first quarter. Good team play gave Carlow a 27-21 lead at the end of the first.

Both teams kept up a fast pace in the second quarter. Carlow’s introduction of guard Kazuhiko Yokohama gave them a speed advantage when it came to getting up the court on fast breaks. Alex Dolenko, of Tolka, used his athleticism to drive in and draw fouls, putting Carlow in foul trouble. Solid team play from Carlow, including Julian O’Keefe and Armand Vaikuls gave them a, 40-32, lead at halftime.

Tolka came out after the half revitalised. With some massive scores, thanks to Goldsborough, Dolenko and Tom Kenny, they were able to rattle Carlow, causing them commit turnovers and miss chances. Tolka took a seven-point lead late in the third but Carlow’s Julian O’Keefe made a huge three on the buzzer to cut Tolka’s lead to four points leading into the fourth, 58-62.

The fourth quarter saw Carlow and Tolka trade leads a number of times. Alex Dolenko slammed home a fast break dunk and on the very next play, he looked to be in again, if it were not for Johnny McCarthy, who blocked him against the backboard. With a minute to go, Dolenko would be the hero again, as he nailed a dagger of a three to push Tolka’s lead to eight points and take the game out of Carlow’s reach.

After the game, Bad Bobs Tolka Rovers head coach said, “I feel we got caught up in the tension a little bit but once we made it to the second half we were marvellous. Alex was brilliant down the stretch and we’re delighted.”

It was a comfortable win for Ballincollig as they ran away victors in the Hula Hoops Presidents National Cup semi-final, a performance that Kieran O’Sullivan said was well needed after picking up their first loss of their league campaign recently.

“It was a tough December for us, so to win today we’re really over the moon. Last week there was a couple of things not going well for us, our physicality was off cue, but it was all there tonight.”

The game got off to a quick start, both teams scoring with ease in the first five minutes, the highlight of which being Andre Nation’s graceful dunk on the end of a lob from Ian McLoughlin.

However as the quarter progressed this wasn’t the last we would see of Nation gliding through the air, as he powered down three more dunks before the first period concluded, one of which saw him jump right over the head of Tommy Walsh on the break.

The first quarter performance was good enough to see Ballincollig go up 35-22, Celtics struggling to find an answer for the Cork side in the final two minutes of the quarter.

The second quarter began as the first ended, Nation catching a lob from Ciaran O’Sullivan as Ballincollig continued to score in bunches.

While Celtics did what they could in the contest, Ballincollig certainly put the game beyond doubt in the first half, the theatrics of Nation combining with the leadership of Ciaran O’Sullivan and Ian McLoughlin to make it 61-34 at the interval.

The second half was much of the same, Ballincollig putting in a measured performance against a Limerick team that could do little to stop the leaders of the Division One Southern Conference.

Going into the fourth Ballincollig were able to use their bench, giving Kieran O’Sullivan a chance to let some of his younger players see the floor.

“This is only the beginning for our club. We want to go Super League so to see the young guys getting experience on this stage is huge. They play under a great leader in Ciaran (O’Sullivan) and with the best player in the country in Andre (Nation), we couldn’t ask for much else and we’re over the moon right now.”

Maree set the tone early on, with the experience of Claire Rockall pushing the ball on the break for much of the opening stages. The quick play on the break caught Swords out a number of times and the lead was 28-10 for Joe Shield’s outfit after the first period.

The second period warranted much of the same – in fact, exactly the same, as both teams matched their tallies from the opening quarter to go into the break 56-20.

Peggy and Katie Black were instrumental in creating anything for Swords offensively, but the combination of Fiona Scally inside and Rockall at the guard spot was just a couple of threats that the Dublin outfit were having to account for on the floor.

In the second half Maree continued to let their class show, highlighting just why they are undefeated in the Women’s Division One thus far in the campaign.

While Swords Thunder lost the quarter by just two points, a much better performance than in the first half, the ability of the Oranmore outfit to rotate players in and out and maintain the standard of play was a testament to the quality of their squad as a whole, something that Joe Shields noted after the game.

“Claire (Rockall) is a super player and everyone feeds off her but we are not a one-woman team and far from it. Everyone played their part today and we now have a cup final to look forward to, what else could you ask from them!”

The Maree coach was also full of praise for his opponents as they look forward to the final.

“Swords are a much better team than they showed today – they know that and we know that. But right know we’re going to watch the second semi final and see who we draw and look forward to that then.”

For much of the first quarter the action was back and forth, both teams putting runs together but never pulling away from their opponents.

Claire Melia established herself as a threat on the block early on in the game, proving a menace to keep off the offensive and defensive glass. While Elks pulled away in the second, a run from Portlaoise just before half-time saw them go into the dressing room 36-35 ahead.

It was the third quarter that made the difference, particularly the last five minutes, as a devastating run by Elks put them 52-41 up going into the fourth. Their smothering zone defence caused Panthers numerous problems as they struggled to get the ball inside and were forced into turnovers and poor shot selections.

The side from the country’s north continued their fine play to begin the final quarter, forcing Portlaoise into a quick timeout after six quick points had them up seventeen with seven minutes left in the game.

While a three from Ciara Byrne looked to spark a comeback out of the timeout, any momentum change was quickly thwarted when a clever play under the basket found Nichola Rafferty for an easy two, putting Elks back up by seventeen.

In the end Elks had plenty of breathing room and Patrick O’Neill’s team were able to cruise to the first Hula Hoops Cup final in the club’s history.

“We knew we were going to be up against it as Portlaoise are a quality outfit,” O’Neill said before praising his team. “For us to show the defensive intensity and maturity throughout the game, I am so so proud of them and I really couldn’t have asked for more.”