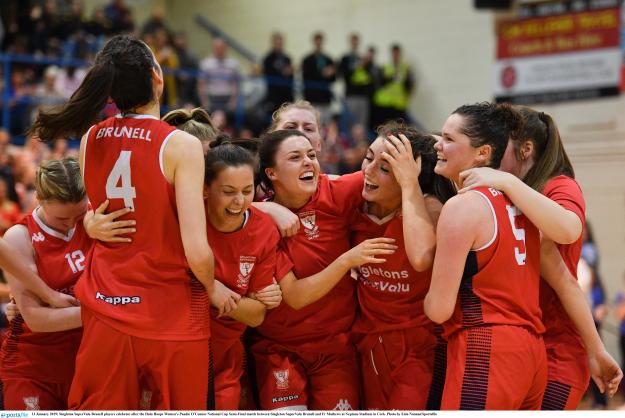 There was no show like a Roe show at the Mardyke Arena UCC this evening as Ciaran Roe was the name on everyone’s lips, after a stunning 34-point display from the Irish international saw him send his Killester side home to a 76-70 point win over Garvey’s Tralee Warriors. Killester dominated the early exchanges, driving in to a 29-13 point lead by the end of the first, and were still looking comfortable at half time, up 43-32.  Warriors were far from done though, and they began chipping away at Killester’s lead as the third ticked down, with Fergal O’Sullivan and Keith Jumper driving the comeback, but big defense from Luis Filiberto Garcia Hoyos kept some space on the scoreboard going into the last, with Killester leading 56-48. Quarter four was truly the story of the point guards, with Paul Dick lighting up the court for Tralee, pulling his team back into the game bit by bit, and with seven points in a row from the Tralee talisman, the game was back in the melting pot. A huge stop from Hoyos with 22 seconds to go had the crowd on its feet, but a steal and score from Warriors saw it at a two-point game with just under 15 seconds to go. Ciaran Roe stepped up to the challenge though and, with ice in his veins, sent Killester home to glory with superb shooting from the free throw line at the death.

“It feels great to be back in a final,” Roe said afterwards. “It’s great to be back there and try to get a win this time around. We don’t get enough credit for the amount of experienced bodies that we have on our team, it was all about sticking to the game plan, as we know when we go out there with intentions and focus no one can stop us.”

“I’m really, really thrilled that we’re going back to the final, because last year, one of my mistakes cost the players to lose the Cup. So it was huge for me personally to help them get back this time,” said an emotional Ioannis Liapakis of UCD Marian this evening as his team booked their spot in a second consecutive Hula Hoops Men’s Pat Duffy National Cup final.

Last year’s runners-up drove home to an emphatic 91-63 point win over Belfast Star in the semi-final in Cork this afternoon. Huge displays from Mike Garrow, Conor Meany and Mariusz Markowicz laid down a statement of intent from early on, with Marian taking the reins of the game firmly in hand to open up a 22-14 point lead by the end of the first. The big scoring continued as Marian showed their experience against a Star team who were appearing in their first National Cup semi-final since 2003, and by half time, they were 50-37 points to the good.

Star’s Mike Davis, Conor Quinn and Sergio Vidal were huge for Belfast into the second, but the gap was just too big to overcome for Star and they bowed out to a hugely experienced and extremely hungry Marian.

“Defensively I think we did an amazing job,” Liapakis continued. “That may be the best performance in the year defensively for us, and if we play well in defense we have a good offense and that’s what happened tonight. In the league, we don’t have consistency at the moment so we knew that this was a huge opportunity for us to prove that we are at high level basketball and that’s exactly what we did.”

Courtyard Liffey Celtics are on their way to a Hula Hoops National Cup final later this month as they overcame reigning Hula Hoops Cup champions, DCU Mercy in resounding fashion, 51-71 at the Mardyke Arena UCC today.

Allie LeClaire and Briana Green were the standouts for the Kildare side who continued their unbeaten league form into this weekend’s Cup clash to book their spot in their first Cup final appearance since 2017.

A nip and tuck first quarter saw nothing between the sides, with Celtics just edging the lead by the end of the period, 14-16. It was in the second quarter though when the Kildare side truly showed why they are sitting at the top of the Women’s Super League table unbeaten. A huge second quarter display became the mountain that DCU had to climb, as Green and LeClaire began to dominate, finishing the quarter on 14 and 12 points respectively, while some big shots from Sorcha Tiernan also helped to see them into a commanding 26-41 point lead.

Shakena Richardson, Sarah Woods and Samantha Hyslip drove the reigning champions on as the third quarter got underway, but with such a big lead to surmount, despite a fantastic third, they trailed 41-63 going into the last.

A close fourth quarter followed, but the damage had already been done at that stage and Liffey saw home victory 51-71 in the end.

Singleton SuperValu Brunell became the first team to reach the Hula Hoops Women’s Paudie O’Connor National Cup Semi Final this year with a 61-52 win over Fr Mathews. It was a close game throughout until the end of the fourth quarter when Brunell began to pull away. Danielle O’Leary made some huge shots as she led her team on their way to the National Basketball Arena at the end of January.

Brunell came out storming, much to the delight of their supporters in Neptune Stadium, who made themselves known from the beginning. The Fr Mathews fans then raised their noise level to let their Cork neighbours know that they were there. Tricia Byrne of Brunell led her team to an early lead alongside her teammate Linda Rubene. Soon after, Fr Mathews began to pick up scores thanks to Chantell Alford but they ran out of time in the first as Brunell led 20-15.

The second quarter saw a revitalised Mathews come out and huge scores from Alford saw them take the lead towards the end of the quarter. Rubene and Byrne continued their scoring for Brunell in an effort not to allow Fr Mathews to run away with the game. Half time score, 30-32.

Brunell used their phenomenal fast break to their advantage as they picked apart Mathews’ defence at big moments during the game. Danielle O’Leary made two huge three pointers in an attempt to take the game away from Fr Mathews but the ever-present Chantell Alford continued to make huge plays and keep her team in reaching distance by the end of the third, 49-42.

And it's all over!! @SvSingleton take a 61-52 win over @frmathewsbc in the Paudie O'Connor #hulahoopscup semi-final!

Mathews tried to launch the comeback led by Niamh and Grainne Dwyer, but the shots just didn’t drop for them and some massive blocks from Rubene and superb defense across the board from Brunell kept momentum with the women in red. Danielle O’Leary sent a deafening roar across Cork with an enormous three-pointer late down the stretch and it was signed, sealed and delivered by the full time buzzer, 61-52 in favour of Brunell.

Speaking afterwards, a hugely emotional O’Leary said:“It’s amazing, we’ve put in a hard six, seven years and I feel amazing. Fr Mathews were always going to come out strong and we knew it wasn’t going to be easy but we saw it out. Tallaght here we come.”