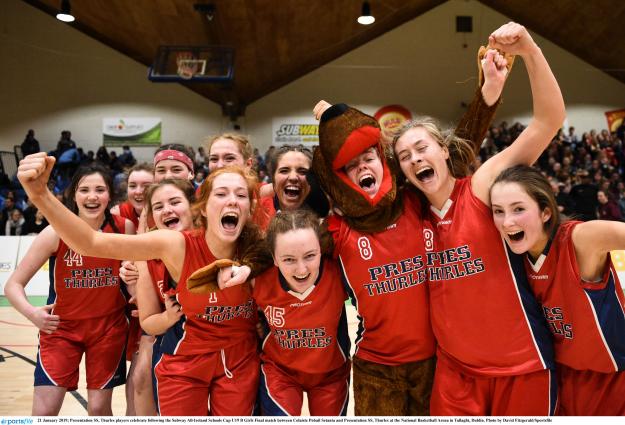 St Patrick’s Navan stormed home to Cup glory at the National Basketball Arena in Tallaght this evening, as they won out 54-43 against Colaiste Muire Crosshaven in a hotly contested Subway Schools Cup U16 B Boys final.

Huge performances from Thomas Kerr and Ethan McBride for St Pat’s were the difference on the day and, despite an absolutely stand out performance from Crosshaven’s Rodrigo Gonzalez, it just wasn’t enough in the end.

The opening quarter was neck-in-neck with Alex O’Reilly and Ethan McBride dominating the scoring for St Pat’s, while Rodrigo Gonzalez and Sam Hogan caused huge problems at the other end for Crosshaven, to see them edge into a three point lead at the end of the first, 8-11. 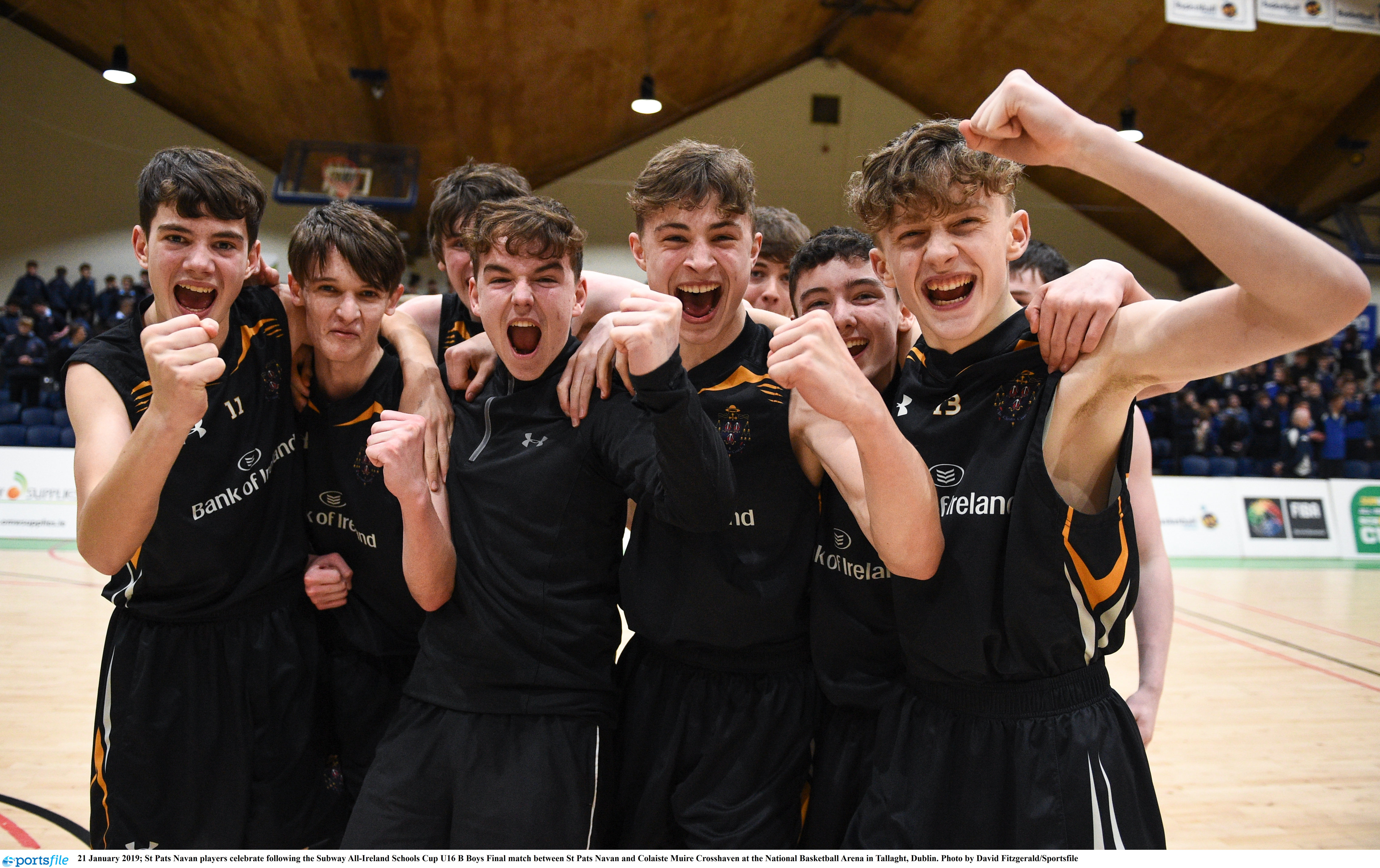 A big scoring second quarter followed with both teams finding their rhythm early on. McBride continued to lead the charge for St Pat’s, with big buckets from Jake Morris and Thomas Kerr helping them to stretch into a lead. Crosshaven kept with the pace though, and Gonzalez continued to star, bagging seven of their nine second quarter points, but it was Pat’s who held the lead going in at the break, 26-20.

A big third quarter followed, with Gonzalez and Eoin McDaid dominating for Crosshaven once more, but St Pat’s kept their noses in front, with Alex O’Reilly, McBride and Matthew Cully all bagging huge points to see them into the fourth on a 39-30 point cushion. Crosshaven weren’t going down without a fight though and led by the shining star Gonzalez, put in a superb fourth quarter display with Conor Finn and Josh McCarthy chipping in with some big scores, but O’Reilly and Kerr had other ideas at the other end, and sent St Pat’s home to a memorable victory 54-43.

Scoil Ruain Killenaule held off a late, late comeback from St Mary’s Ballina this afternoon to see home a 39-35 point win in the Subway Schools Cup Under 16 B Girls final today at the National Basketball Arena in Tallaght.

An MVP performance from Niamh Hayes who was outstanding in particular on defense, along with a super display from Issy Hayden helped see their side home to victory in a tense and nervy battle that went right down to the wire as St Mary’s put in a huge fourth quarter performance to put the result in the balance at the death. 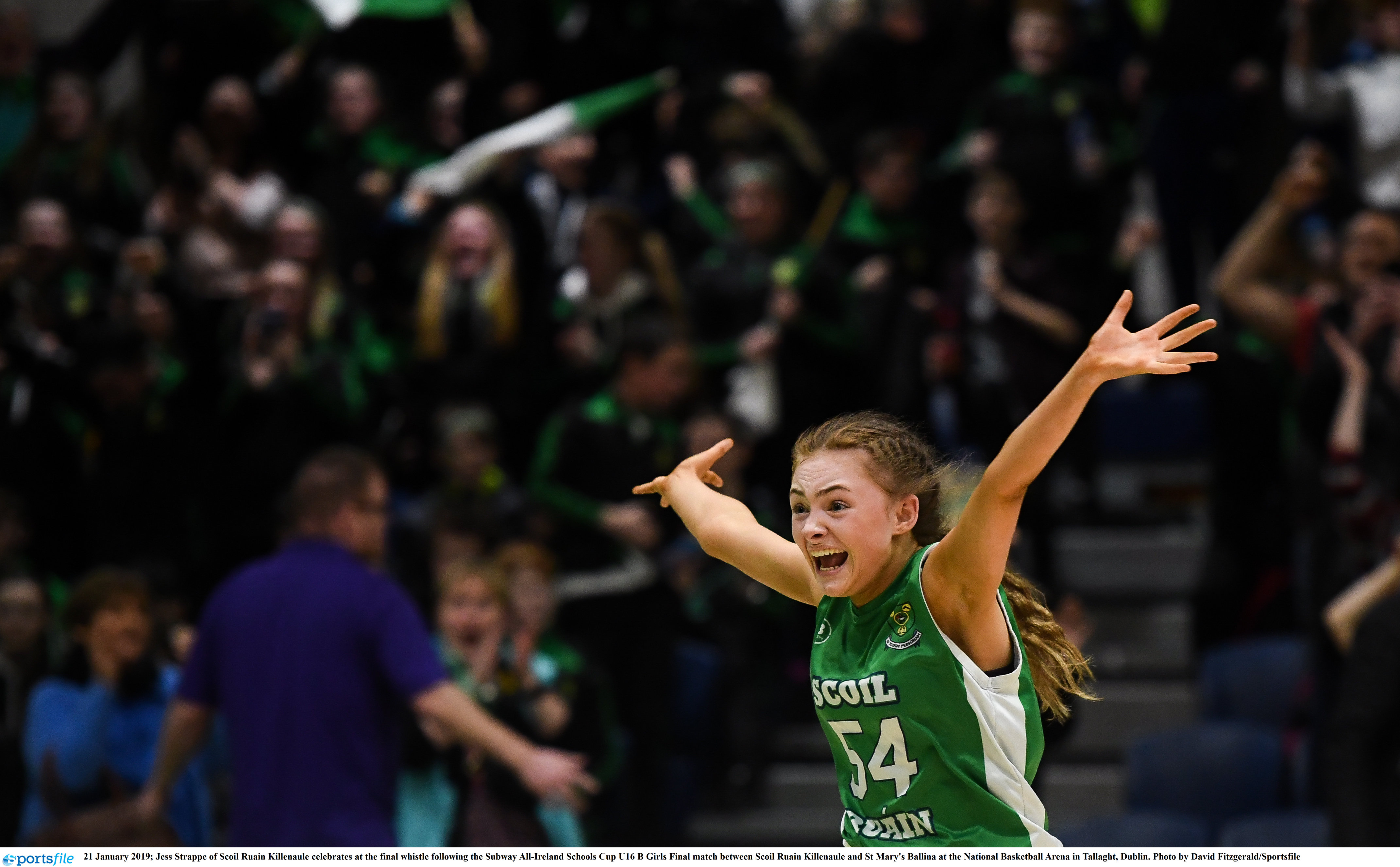 A close first quarter saw nothing separating the two sides. St Mary’s settled quickest, with Shauna McCann and Orla Boyce netting some big scores and despite some big shots from Issy Hayden at the other end, the Mayo side held a 6-10 lead at the end of the first. Scoil Ruain weren’t long in responding though, and a big second quarter saw Siobhan O’Hanlon, Hayden and Jess Strappe to the fore, with Ava Heffernan chipping in some big points for her side too. Big defense from Scoil Ruain limited St Mary’s scoring to just seven points in the quarter – these coming courtesy of Eimear Treacy and Boyce, but Scoil Ruain held the lead going in at half time, 23-17.

Scores were at a premium in the third quarter, with neither side getting off the mark until the midway point of the quarter. Four points in a row from Scoil Ruain’s Ava Heffernan and Niamh Hayes saw them open up a ten-point gap (27-17) with just under three minutes to play,  St Mary’s came back at them as the quarter came to a close, and points from Boyce and Treacy brought the gap back to 34-22 going into the last.

A huge run from St Mary’s in the fourth quarter brought the game right back into the melting pot as they went on a 2-9 run to see them trail by just five going into the last minute and a half. Scores from Emelia Murphy, Amy Connor, Shauna McCann and Boyce once more teed up a nerve-wracking finale to the game, with Georgia Murphy proving to be a thorn in Scoil Ruain's side. Scoil Ruain kept their cool though and Issy Hayden stretched the lead once more from the free throw line, netting both of her shots under big pressure. However, the game was not over just yet and a huge response from Georgia Murphy, Ella Morrisson and Boyce saw St Mary’s back within four as the seconds ticked down. It was too little, too late for the Mayo side though as time ran out and Scoil Ruain were crowned champions after a thrilling finish.

Brian Gaffney was the hero for St Joseph’s College the Bish as they won out by two points in a thrilling double overtime Galway derby in the Subway Schools U16A Boys Cup final at the National Basketball Arena in Tallaght.

With under five seconds on the clock in the second period of overtime, the teams were tied at 56 points apiece and it looked certain that the game was headed to triple overtime, but Gaffney had other ideas and took the ball from the inbound and somehow, got the shot off to see his side home to an incredible 58-56 point victory.

It was a game you couldn’t take your eyes off from the start. A huge first quarter from Calasanctius saw them run into an early 16-9 lead by the end of the first, thanks to big scoring from Roniel Oguekwe who stamped his authority under the boards early on. The Bish found their feet though in the second and a thrilling quarter ensued as they brought the game right back into the melting pot, with Aonghus McDonnell stepping up for some big scores along with Brian Gaffney and Joe Coughlan to see it perfectly poised going in at half time at 25 points apiece. 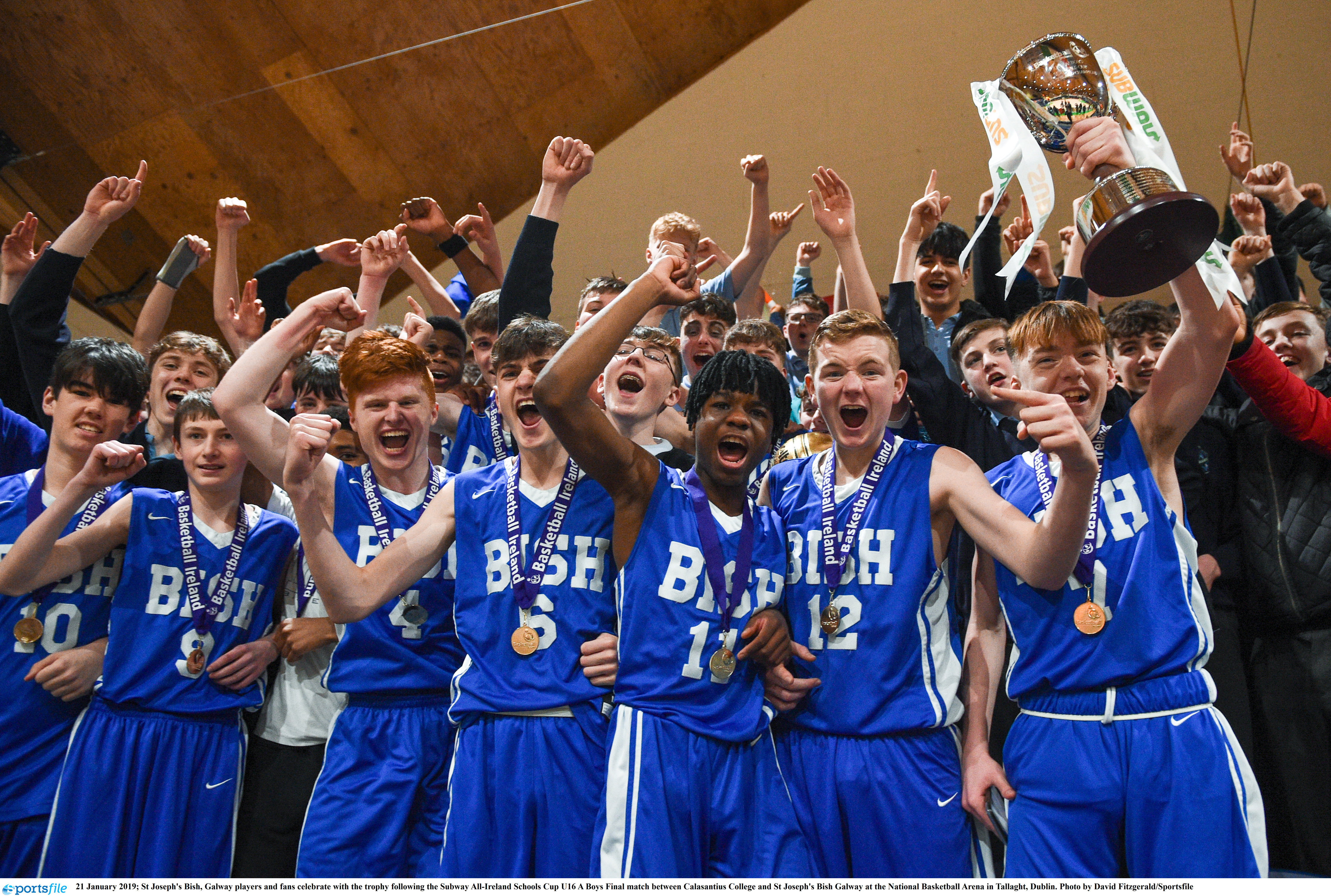 Quarter three was another nail-biter, with Calasanctius getting a small bit of breathing room on the scoreboard to edge 29-25 ahead by the midway point but  Coughlan and Gaffney were on hand once more to tie the game level, and they edged The Bish in front just moments later, and a big finish to the quarter from Tony Ezeonu saw The Bish lead 35-38 going into the last.

Gaffney led the charge in the fourth for the Bish, driving them out into a 39-44 point lead by the mid way mark, but Calasanctius weren’t going down without a fight. Huge scoring from Oguekwe and Ben Burke kept them right in the mix, and with just over two minutes to go, Oguekwe closed the gap back to three with a  huge score. With just over a minute to play, Evan O’Rourke hit a huge three-pointer for Calasanctius and suddenly, it was back to a tie game at 44 apiece.

A huge score from Ezenou for the Bish edged them ahead, but again, it was Burke who was on hand to reply immediately and with 39 seconds to go, it was all square once more. Scores were matched at both ends of the floor and on the full time buzzer, it was level at 46 points and overtime loomed.

A nervy first period of overtime followed, with free throws that could have sealed victory for either team missed at both ends.  Oguekwe chipped in some big scores for Calasanctius to edge them in front, but again, Tony Ezeonu was on hand to tie the game level yet again, and the buzzer sounded on 48-48.

With the crowd on the edge of their seats, the second overtime period got underway with Burke sending Calasanctius into the lead with a huge score, before a massive three-pointer from Joe Coughlan reversed the scoreline once more and edged the Bish ahead by one. Burke replied in kind, with a huge three-pointer sending his team into a two-point lead, and Oguekwe stretched this lead out to four points with a well-taken score. Gaffney took the challenge firmly in hand though and put a huge score in to close the gap, before Dean Coughlan tied the game up with 5.8 seconds to go at 56-56. With possession in favour of The Bish coming in off the time out, a huge play was needed and Gaffney stepped up – grabbing the inbound firmly from the corner of the arc and sending the ball sailing through the net for a memorable two point win on the buzzer, 58-56.

Presentation SS, Thurles drove home to an impressive 65-76 point win in the Subway U19 B Girls Schools Cup final this morning, overcoming Coláiste Pobail Setanta to be crowned champions.

It was Presentation SS that were the first to get points on the board with a fast break lay-up from Anna Dunne in the opening seconds of the game. MVP Marie Creedon followed suit, and it was her drives to the basket which ultimately proved to be the thorn in the side for Coláiste Pobail Setanta’s defence. Setanta’s Irish international player Katie Williamson responded with scores of her own to keep the Dublin team within reach at the end of the first quarter but Presentation Thurles were up five, 14-19.

It was an explosive second quarter start for Setanta with back-to-back threes from both Williamson and Milica Stankovic seeing them turn around a nine-point deficit. As both sides were tied up at 23 apiece, the tactical introduction of Laura Daly for Presenation Thurles saw her edge her side out in front once more with a huge three-pointer. Anna Dunne proved crucial for Presentation as she netted baskets under the board while Marie Creedon’s strong drives to the basket proved troublesome for Setanta. Despite the huge intensity and energy both sides brought to the quarter, Presentation held a 15-point lead at the end of the third.

Credit is due to Setanta as they never once gave up the fight, scores from Katie Williamson and Teodora Kutijevac saw them claw it back to just eight-points in the final minutes of the game, however thanks to the superb offensive display from Creeden and Dunne, Presentation Thurles were crowned winners, 65-76.