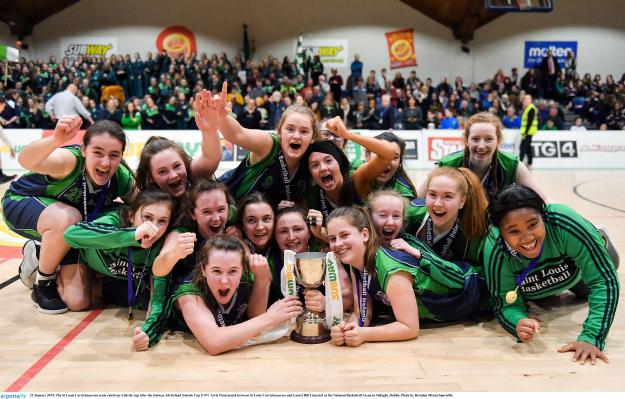 Bantry set the pace early on with Liam Cotter getting them off the mark early to edge them ahead. Big three point scoring from game MVP, Coiribe’s Cronan Ward and Máirtin Ó Conghaile closed the gap at the other end, but Bantry’s Kevin Clifford replied with some big three pointers, and scores from Shane Murray saw the Cork team into a 12-20 lead at the end of the first.

It was merely a settling period for Colaiste na Coiribe though, as they came out of the traps all guns blazing in the second quarter. Big shooting from Bantry’s TJ Sullivan, Cotter and Murray were immediately responded to at the other end - with Ward again to the fore, while Cathal Madden, James MacLochlainn and Oisin Ó Gormaile added some big scores to tie the games level at half time, 27-27.

A thrilling third quarter followed, with Colaiste na Coiribe edging into the lead after four minutes, and scores from Ó Gormaile, Ó Laighléis and James MacLochlainn saw them edge further in front. A massive three pointer from Shane Murray for Bantry was the reply, and this was followed by another big three pointer from the high-scoring Thomas Flynn. Momentum was firmly with Colaiste na Coiribe though, and they held the lead, 44-38 going into the last.

A frantic fourth quarter had the crowd on the edge of their seats as scores were at a premium for both sides. Cathal Madden got Colaiste na Coiribe off the mark, and scores from Ward and Ó Gormaile followed. Bantry weren’t going down without a fight though and superb three-point shooting once more from Flynn, Murray and Cotter closed the gap right back, but time ran out on the comeback and Colaiste na Coiribe were crowned champions by eight points.

Donegal’s Coláiste Ailigh were convincing winners of the Subway Schools U16 C Girls Cup final at the National Basketball Arena in Tallaght this afternoon as they ran out 59-26 point winners over Limerick’s Laurel Hill.

It was the Limerick’s side second final of the day, having lost out in the U19C battle this morning, but the players who crossed over the two teams certainly didn’t show any sign of fatigue, as they battled right up until the final buzzer.

It was a Shannon Ní Chuinneagáin inspired performance for the Donegal side as she put in an MVP display that included a whopping 40 points, but she was also key for them on both ends of the floor.

Laurel Hill had the better of the opening few minutes with Jennifer Duffy, Alex McInerney and Jana Zundel edging them ahead, but as the quarter ticked on, Coláiste Ailigh hit their stride and Shannon Ní Chuinneagáin and Shauna Ní Uiginn added scores, with the former notching 16 of her side’s opening quarter 18 point tally, to see them lead 18-7 at the end of the first.

Ní Chuinneagáin took over the reins of the game in the second quarter, driving hard at the Laurel Hill defense and, despite good work from Zundel, McInerney and Lily O’Halloran, Coláiste Ailigh led 31-14 at the half.

A spirited display from Laurel Hill in the second half kept their scoreboard ticking over but in the face of such a poised and polished performance from Ní Chuinneagáin, supported by a great display from Shauna Ní Uiginn, they just couldn’t close the gap and she finished out the game with 40 points to see her side home to Cup glory.

The Hannigan brothers put on a shooting exhibition at the National Basketball Arena in Tallaght this afternoon as they drove their side Gaelcholaiste Mhuire AG home to U19A Boys Subway Schools Cup glory for the first time since 2002.

It was poetry in motion from the Cork side as James and Scott Hannigan led the charge from late in the first and didn’t look back from there, with David Lehane also chipping in with a superb display for the Cork side. The Hannigans though did the damage where it hurt the most, netting 53 points between them to see Gaelcholaiste Mhuire AG home to a historic victory.

In a pulsating Cork/Kerry clash, the opening five minutes of the first quarter saw the sides neck-in-neck, with Daire Kennelly leading the way on the scoreboard for Mounthawk, but was matched score for score at the other end by the hugely talented Scott Hannigan. Indeed the Hannigan brothers took over in the closing stage of the first quarter, as they added another six points between them to see Gaelcholaiste Mhuire into a 14-22 point lead at the end of the first.

A big second quarter followed from the Cork side, with Kevin Moynihan, James and Scott Hannigan chipping in some big scores and by the mid way mark, they had stretched out 10 points ahead, 23-33. Mercy Mounthawk got back into their stride though as the quarter ticked down, with James Fernane and Daire Kennelly causing huge trouble inside for the Gaelcholaiste defence and by half time, they trailed by 35-42.

A huge start to the third quarter saw Mounthawk straight back in it, with Leeroy Odiahi driving his side forward with some big scores, and Kennelly and Fernane hitting the target once more to have the game back to four points. Lehane had other ideas though and sailed home a dagger three-pointer at the other end, and went to the line for the four-point play bonus. Mounthawk were back on the chase though and more scores from Steven Bowler and Philip Corkery rained in, but it was Gaelcholaiste Mhuire with the advantage at the end of the third, leading 51-63.

Mounthawk never gave up and Corkery, Odiahi, Kennelly and Fernane led the way in the fourth for the Kerry side, but the Hannigans, Lehane and Moynihan continued to punish them, forcing turnovers and netting some big scores to see them home to victory on a final scoreline of 68-79.

Speaking afterwards, head coach David Lehane said: “It’s brilliant, it’s great for the lads, they worked hard all season so it was much deserved. The two Hannigans were outstanding. This is the first time since 2002 to bring some silverware back so we’re very happy.”

“It’s been a long time since we’ve won anything up here in the Arena – it must be over 20 years, so we’re absolutely delighted,” said St Louis Carrickmacross head coach Eugene O’Hanlon after his side edged a two-point victory over Laurel Hill of Limerick in a thrilling Under 19 C Girls Subway Schools Cup at the National Basketball Arena today.

The game was decided in the end by two free throws for Carrickmacross, as Sarah Corr and Lauren Garland kept their cool from the line to see St Louis home to a two-point win, after Laurel Hill launched a major comeback in the fourth to bring the game right down to the wire.

It was end-to-end action right from the off, with Laurel Hill getting the better of the early exchanges, with Amy Higgins, Claire Goggin and Jana Zundei dominating to see them take a 6-9 lead into the second quarter. St Louis found their feet in the second though, and scores rained in from MVP Aine Loughman, Caitlin Wilcox and Sarah Corr to edge them into a 16-11 lead by the midway mark, and they stretched that out to a 20-13 half time lead.

It looked like St Louis were going to keep the momentum in the third quarter, as they stretched their lead out further in the opening few minutes, but a rejuvenated Laurel Hill had other ideas and Simona Mlakova, Higgins and Zundei led the charge and by the end of the quarter, had the gap back to just three points, trailing 30-27.

The action had the crowd on their feet for the entire fourth quarter as Laurel Hill continued their comeback to tee up a thrilling finale. With just two minutes gone in the fourth quarter, it was back to a one-point game courtesy of Zundei. Huge displays at the other end from St Louis’ Loughman, Corr and Wilcox kept the sides matched score for score, but with five minutes to go, Laurel had slipped into the lead by four. Determination was the name of the game though for St Louis, and led by Loughman, they continued to pressure Laurel Hill, forcing some turnovers to win back some crucial points and with two minutes to play, it was a draw game at 36 points. Nerves of steel were the name of the game as the clock ticked down and with Wilcox, Corr and Garland all hitting a free throw each in the dying seconds, it was enough to see St Louis home to glory.