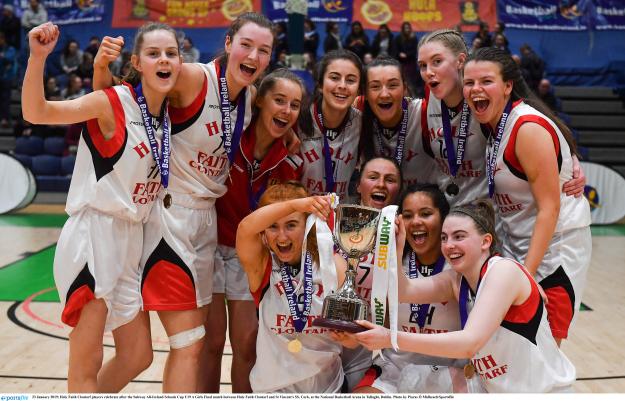 Colaiste Einde drove home to victory in the Subway Schools Cup Under 16 A Girls final with an impressive 53-36 win over Pobalscoil Inbhear Sceine.

The McCleane sisters were two of many stars for Colaiste Einde today, racking up an impressive 23 points between them.

It was a slow start to the game as both teams tried to find their feet but it was Colaiste Einde’s Kara McCleane that was first to score with her drive to the basket drawing a foul sending her to the line. It was touch-and-go for both teams from thereon in, with Pobalscoil Inbhear Sceine’s Amy Harrington and Tania Salvado responding with scores of their own, but fantastic defensive play by Aoibhinn Walsh and Ellen Power was enough to see Colaiste Einde finish the first quarter ahead, 16-10.

A bright start to the second quarter by MVP Kara McCleane pushed the lead out to ten-points in the early minutes and despite Harrington’s superb offensive efforts, Colaiste Einde had firm control on the pace of the game. The depth of talent on Colaiste Einde’s bench was apparent as the introduction of Ailbhe Lisa Hanney, Ilena Davoren and Eva Hackett caused further trouble for Pobalscoil Inbhear Sceine as their additional scores stretched the gap out to 20-points midway through the third. Pobalscoil Inbhear Sceine never gave up the fight, with captain Tania Salvado impressing with some super steals and scores under the basket while teammate Robyn Mayhew was on hand to help with rebounds. With the Colaiste Einde supporters well and truly in a frenzy of excitement it was apparent that victory was theirs though, and they finished out the game with a 53-36 win.

A late comeback from St Brendan’s Belmullet just wasn’t enough in the Subway Schools U19C Boys Cup final this afternoon, as they lost out 55-67 to Waterpark College of Waterford.

The Mayo side certainly made it a nervy finish for all involved, bringing the game back to within three points with just four minutes to play but in the end, MVP Mikolaj Sienicki and a superb display from Colm O’Reilly edged Waterpark back in front and they held on to see home a memorable win for the team.

A hotly contested first quarter saw just one basket between the sides at the buzzer, as Evan Ivers, Dylan Walker and Luke O’Reilly dominated for St Brendan’s but were matched score-for-score by Waterpark’s Mikolaj Sienicki and Colm O’Reilly to see the Waterford side lead by two, 15-17.

Waterpark hit their rhythm in the second quarter though, and big scores from Sienicki and O’Reilly saw them stretch into a nine point lead by the midway mark. Belmullet were not lying down though, and Sean Lavelle, Evan Ivers and Eoin McDonnell stepped up to the mark in style to close the gap back down, but a dagger three from Sienicki closed the quarter and edged Waterpark into a 26-34 point half-time lead.

The third quarter was just as fast-paced, with St Brendan’s out of the blocks extremely fast, with scores raining in from Ivers, who slotted home seven points back-to-back. Two more baskets from Lavelle kept the Mayo team right in the mix, but again, it was Sienick and Colm O’Reilly who kept Waterpark’s noses in front, while James Delahunty began to dominate under the boards getting some huge stops on St Brendan’s to deny them further scores to see the Waterford school into a 43-52 point lead going into the last.

The fourth quarter was heart stopping stuff though, as St Brendan’s again came out all guns blazing, and with just over four minutes to go, scores from Aran Reilly, Lavelle and Ivers had the game back to a three-point game, 55-58. A timely time out for Waterpark followed, and it was Waterpark’s Sean Ryan that settled his side down once more with a well-taken score which was followed by a super score from Mark Phelan and they were back in the driving seat once more and drove home to a 55-67 point win in the end.

A thrilling Under 16 C Boys Subway Schools Cup final was played out at the National Basketball Arena In Tallgaght this afternoon as Le Cheile Tyrrelstown and Mount St Michael battled right down to the wire for All Ireland honours and in the end, the Dubliners took home the honours thanks to a a huge three-pointer from Nabil Miah.

The Cork side got the better of the early exchanges, edging an early 12-18 lead by the end of the first quarter thanks to solid shooting from Peader O’Rourke and Conor Twomey. Good work at the other end from Le Cheile’s MVP Bryan Valenzuela and Renso Guilalas kept their scoring ticking over as they took a bit longer to settle into the game.

A fast paced second quarter followed, with brilliant shooting at both ends of the floor. Again it was Valenzuela and Guilalas who dominated for Le Cheile, and as the quarter ticked down Reece-Okic chipped in with some big scores for the Dubliners. Twomey, O’Rourke and Michael Maguire were on song for Mount St Michael though at the other end, to see them head into the half time break with a 25-32 point cushion.

The longer the game went on though, the more Tyrrelstown settled, and a thrilling third quarter followed with Nabil Miah, Richard Osuagwu, Valenzuela and Guilalas upping the intensity for Le Cheile and it soon paid off as, with just over two minutes to play, it was back to a two-point game with the Dubliners trailing 36-38. The closing minute and a half of the quarter was frantic, with Mount St Michael pulling out all the stops to widen the gap once more and vital scores from Maguire, Twomey and O’Rourke saw them into the fourth quarter with the lead stretched out once more, 38-45.

Again, it was the never say die attitude of Le Cheile that had them straight back into the mix by the midway point as, trailing by seven, Miah had other ideas. He stepped up with a huge three-pointer to close the gap back to four, while at the other end, MVP Valenzuela pulled off a number of defensive stops and caused turnovers to send Miah to the basket once more for Le Cheile. The cool head of Valenzuela tied the game up as he slotted home his two free throws in style with just over two minutes to play and despite a massive push from St Michael’s, it was Miah who had the last say of the game, as a big stop by Valenzuela sent Le Cheile on the offensive again, and he linked up with Miah who slotted home a gigantic three-pointer and they held on to win by that margin, 50-47.

A clinical and polished display from the Dubliners saw the result put beyond doubt by the midway point of the third quarter, with MVP and Irish international Bronagh Power Cassidy driving her side forward early on, and was supported with stunning performances from her co-captain Maeve O’Seaghdha, Niamh Kenny and Elizabeth Black to see them home to a 73-40 point victory in the end.

Indeed it was a who’s who of young Irish internationals across both squads, with Lauryn Homan leading the way for St Vincent’s and had super support from the talented Eve Hannigan and Orla Murphy.

Holy Faith’s size and athleticism saw then get the better of the opening exchanges as they built up an early lead but thanks to the grit and determination of Homan, St Vincent’s found themselves trailing by just seven points at the end of the first quarter. Unfortunately, that small margin was short lived as the second quarter was where Holy Faith began to stamp their authoirty on the game. St Vincent’s struggled to get the scores on the board thanks to the masterclass on defence supplied by Niamh Kenny, while fellow Irish internationals O’Seaghdha and Power Cassidy weaved their way to the basket to give their team a 37-19 point lead at the break.

A tough third quarter for St Vincent’s followed as Holy Faith continued to dominate as they put in a superb display of skill and shooting, with a never-ending stream of talent off the bench as Emma Crumlish and Elizabeth Black also added their names to the score sheet in the fourth quarter. Murphy and Homan tried tirelessly throughout to close the gap and are certainly names to watch the future as they but in a superb performance on the day, but Holy Faith’s man-to-man defence teamed with their height, strength and experience, proved to be too much as Holy Faith won out comfortably, 73-40 in the end.

“We played really well,” Coach Westbrooks reflected. “And in fairness we have a really strong crew in Bronagh, Niamh, Maeve and Elizabeth, we call them the four horsemen they’re really experienced and it’s hard for teams to match up with them. It makes my job really easy. We have eight sixth years this year, we have been together for a long time and we’ve had success but heartache as well – but today we get the joy and happiness.”