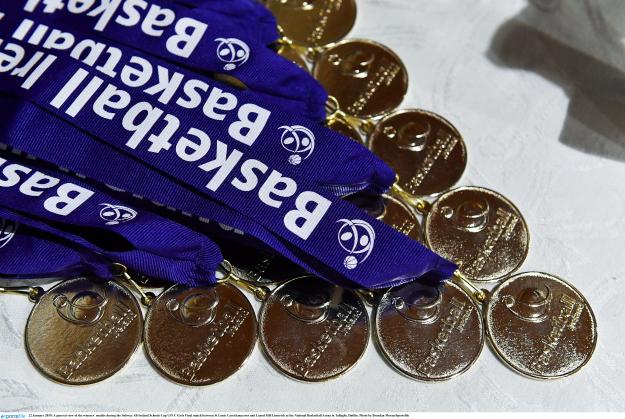 CJ Fulton was the hero of the hour for St Malachy’s Belfast in the U19 A Boys All Ireland Schools League final this afternoon, as a superb second half display from the talented young point guard saw him notch a whopping 25 points across the two quarters, to finish with 28 in total, to see his side home to a 52-43 point victory over St Joseph’s The Bish.

A neck-in-neck first quarter saw the sides all level at 14 points apiece at the end of the period, with Cormac O’Rourke, Conor McDonell and Conor Ryan getting the scoring underway in style for the Malachy’s, but were matched score for score at the other end by The Bish, with captain James Connaire, Liam Nolan and James Cummins all on target for the Galway side.

The second quarter was just the same, with scores at a premium for both sides as the defenses began to get on top, with O’Rourke, McDonnell and Cj Fulton continuing to keep the Malachy’s scoring ticking over, but again, another big three-pointer from Cummins at the other end, along with big scores from Nolan, saw the Bish into a one-point lead going in at half time, 22-23.

CJ Fulton went off in the third quarter though, as with The Bish pulling away slightly in the opening minutes to lead by eight, 22-30, two huge three-pointers in a row from Fulton brough the game right back into the melting pot, and he score all eleven of their third quarter points, including another big three-pointer. At the other end though The Bish were just as determined, Connaire, Cummins and Nolan were all on the mark, and a huge three-pointer from Nolan followed by a good score from Kiernan saw them lead by two going into the last, 33-35.

A huge fourth quarter was expected and it certainly delivered, with scores from Ryan and Fulton edging Malachy’s back into the lead by two. Connaire was on hand at the other end to tie it all up once more, and even though Fulton edged his side out in front again, Connaire again responded with a superbly taken score. 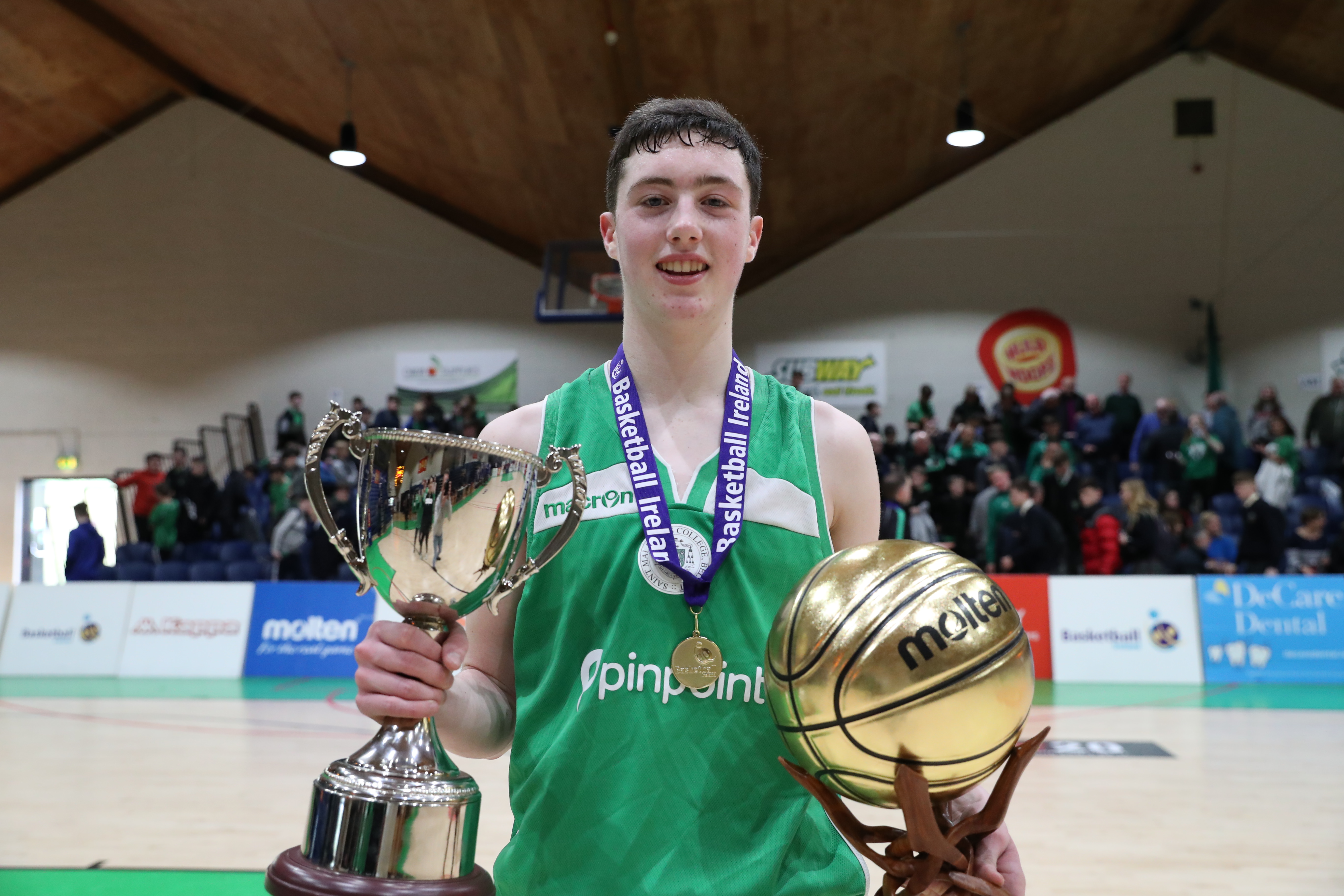 It was Fulton once more who stretched the lead back out, and with scores from O’Rourke and another Fulton three-pointer following, Malachy’s opened up a 48-43 point lead. Scores from Fulton and O’Rourke followed to seal the game and see home a memorable win for the Belfast college.

Galway’s Coláiste Éinde made it an U16 A Girls Cup and League double this season, thanks to a 47-34 point win over Coláiste Chiaráin of Leixlip in the All Ireland League final this morning.

The win adds another piece of silverware to their trophy cabinet, having scooped the Subway Schools Cup title back in January, but it certainly wasn’t an easy win for the Galway side, with Coláiste Chiaráin putting up a fight all the way through to the final buzzer.

Coláiste Éinde’s Aoibhinn Walsh was a huge presence on the court, not only finishing the game with 20 points for her side, but doing superb work on defense and notching some key scores at vital stages of the game to keep her side’s noses in front. She was ably supported by the in-form McCleane sisters, with both Ava and Kara hitting eight points apiece on the day in an all round good team performance.

Coláiste Chiaráin came into the game without the services of Irish underage international, Caoimhe Masterson, who was ruled out of the clash due to injury, but Emma Scully, Emily Smyth and Ailbhe Harrington certainly stepped up to the mark on the day, putting in a superb composed performance to keep the game on tentherhooks throughout. A close and tough first quarter saw great scoring from Coláiste Chiaráin’s Scully and Smyth, as they began to make their presence felt at both ends of the court. Ava and Kara responded at the other end, and good work from Walsh saw her side into a 16-13 lead going into the second.

A big second quarter from the Galway side, led by Kara McCleane, saw them began to find some space on the scoreboard, with McCleane and Walsh both on target to widen the gap out to 26-18 at the half.

A nip and tuck third quarter followed, with Scully and Smyth beginning to dominate once more at the other end. A huge three pointer from Smyth closed the gap further, but points from Ailbhe Lisa Hanney and Walsh helped Coláiste Éinde keep their edge, 33-27, going into the last.

Despite a huge push from Coláiste Chiaráin in the fourth quarter though, Walsh, Hanney and the McCleane sisters continued to tick the scores in, and managed to hold on to win out 47-34 and claim their second All Ireland title in two months.

Tullamore College were crowned U16 B Girls All Ireland Schools League champions this evening, thanks to a 51-61 point win over St Mary’s of Midleton in the final.

A scoring masterclass at either end was the talk of the court, as Lisa Osaghae for Midleton led the charge for the Cork side, Meadhbh O’Brien also put on an exhibition at the other end for Tullamore, while an MVP display from Emma Glavin was ultimately what helped the midlanders over the line.

A close and hard-fought opening quarter, saw Osaghae get Midleton off the mark early with some great scores, while Mia Tarrant found her rhythm to hit the target as well. At the other end, Ellie Galvin, O’Brien, Emma Galvin and Mia O’Mahoney were the pick of the scores to see Tullamore with a slender 10-11 lead going into the second quarter.

Tullamore upped the ante in the second, with both Galvins putting in superb displays, while O’Brien began to rain scores in. Good defense from Midleton soon led to rewards on the offensive end though, with Osaghae, Shannon Deady and Tarrant all hitting the mark, but they trailed 26-32 going in at the half time break.

Tullamore stretched their lead out in the early part of the third quarter, with O’Brien again to the fore for her side, along with good scores from Jean Carson, but a late surge from Midleton saw them begin to chip away at the lead, with great scoring from Osaghae and Ella Tarrant, but Tullamore held a 36-48 point lead going into the last.

St Mary’s kept the pressure up in the fourth, with some big scores helping them to close the gap back down, but again, it was the Glavins and O’Brien who stood firm under pressure, to see them home to a memorable ten point victory in the end.

St Louis Carrickmacross completed a memorable league and Cup double of wins this afternoon, as they ran out 30-25 winners over St Joseph’s Secondary School of Castlebar in the U19 C Girls All Ireland Schools League final.

Nothing separated these teams until the midway mark of the fourth quarter when, led by taliswoman and MVP, Aine Loughman, St Louis edged slightly in front and despite just three points in it for the closing 20 seconds, a late Loughman basket sealed the victory, 30-25.

A low-scoring first half saw little separating the teams early on. Lauren Garland, Sarah Martin and Aine Loughman all on target for St Louis, but they were matched score for score at the other end, with Alice Hussey, Amelia Niemxzycka and Chloe Heneghan all doing well to work the scores through to see St Louis lead by just one going into the second quarter, 9-8. Scores were at a premium in the second quarter meanwhile, as superb work from both defenses saw it hard for either team to penetrate through, and there were just two baskets each for the period, with Loughman and Martin securing the scores for St Louis, while Hussey and Niemczycka found the space for St Joseph’s, but Louis still held the edge by one at the half, 13-12.

That one-point cushion followed them into the third quarter as again, the sides matched each other score for score. Loughman continued to lead the charge for St Louis though, and at both ends of the floor helped drive her side forward. Garland was on hand to chip in with some vital scores, as St Joseph’s Niamh Flannery and Alice Hussey hit some vital scores, but again, Louis held the lead going into the last, 20-19.

A big fourth quarter push from St Louis saw scores from Caitlin Wilcox, Garland and Sarah Corr stretch out Louis’ lead by four, but St Joseph’s weren’t going down without a fight. A superb display by Hussey in the last – which saw her score all six of her side’s last quarter points – was almost enough, but sheer grit and determination from St Louis, including scores from Martin and Loughman saw them over the line 30-25 in the end.