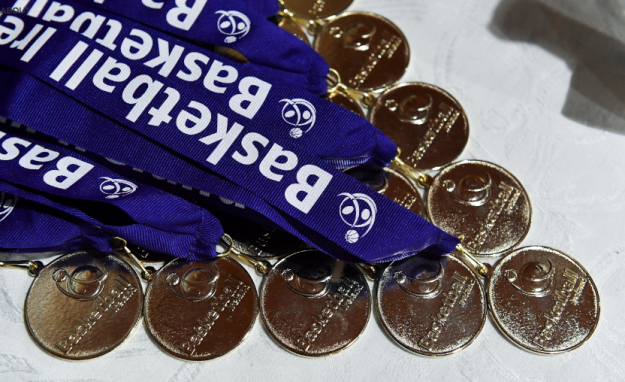 All photographs from the day can be viewed here: https://images.sportspress.ie/gallery/school-league-finals-2019/

All Ireland U19 A Girls Schools League Final

Holy Faith Clontarf completed the All Ireland League and Cup double this afternoon as they won out 65-41 against Scoil Chriost Ri of Portlaoise in the U19 A Girls All Ireland Schools League final.

Today’s win follows on from their Subway Schools U19 A Cup final win back in January, and was just as polished a performance as that one, with superb defense from the Dubliners being the big talking point of the day as they held a talented Portlaoise squad to 41 points.

The charge was led by MVP Maeve O’Seaghdha who finished the game on 25 points for Holy Faith in an all-round superb individual display from the talented Irish international, but she was ably supported in a dazzling supporting cast of Elizabeth Black, Bronagh Power Cassidy, Niamh Kenny and Maria Long. 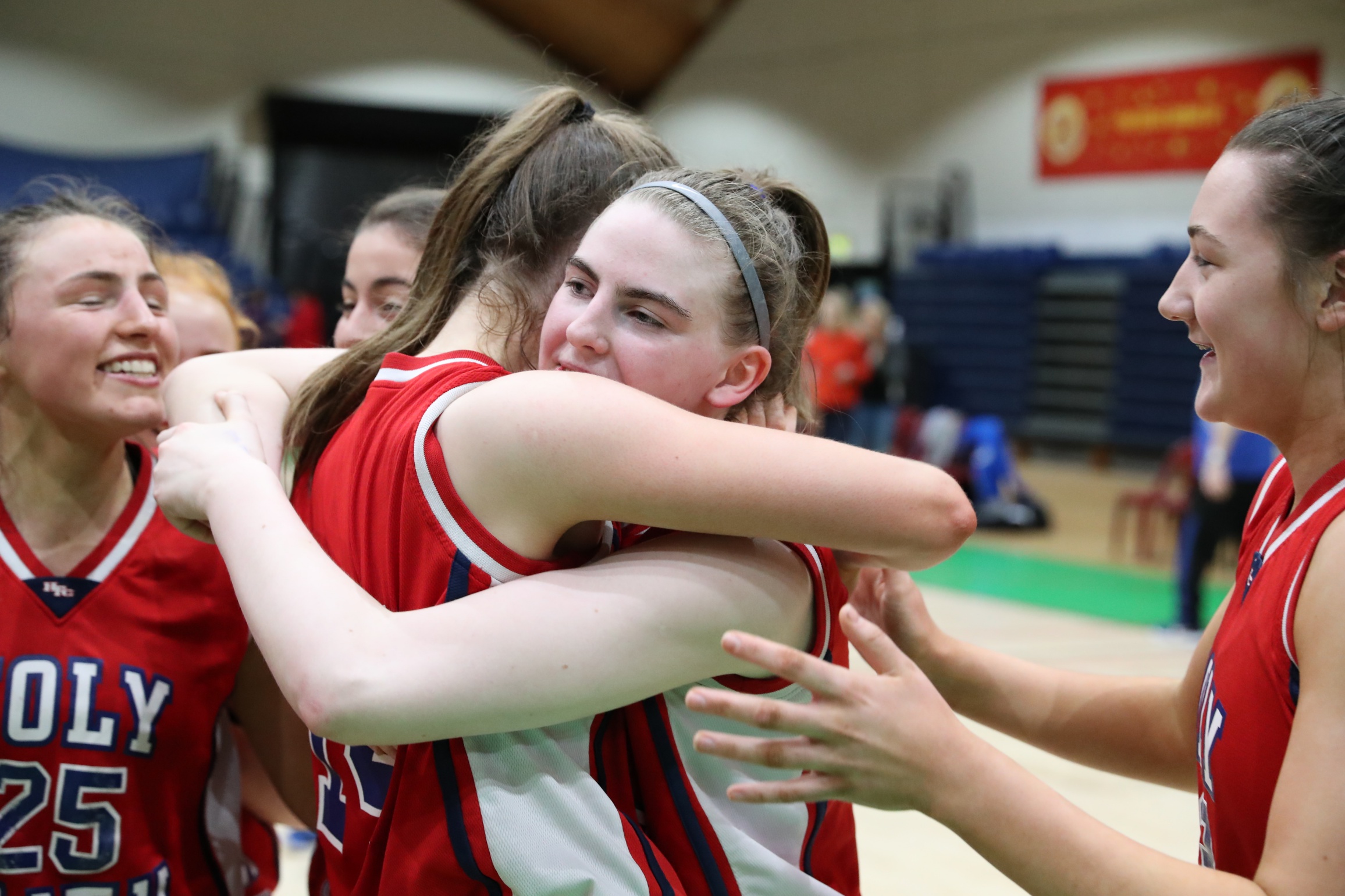 Holy Faith got off to the brightest start opening up a statement 15-6 lead at the end of the first quarter, with big scores from O Seaghdha and Black. Portlaoise soon found their feet in the second quarter though, and Jasmine Burke and Ciara Byrne shone brightest with some fantastic scores to put the pressure on the Cup champions. Holy Faith responded with scores from Kenny and Power Cassidy and despite good work from Shauna Dooley and Erone Fitzpatrick for Chriost Ri, they trailed Holy Faith 35-22 at half time.

A massive third quarter from Holy Faith saw them outscore the midlanders by 18-3, with O Seaghdha dominating at both ends of the court and netting some big scores. Black increased her tally, while a huge three pointer from Niamh Kenny sent them into a 53-25 lead going into the final quarter.

Scoil Chriost Ri kept battling though, and again it was Dooley, Fitzpatrick, Kenny and Sarah Fleming who led the charge with some super defensive displays and great scores. The damage had already been done though, and scores from Power Cassidy, another three from Kenny and a final basket from Emma Crumlish saw Holy Faith home to All Ireland glory. 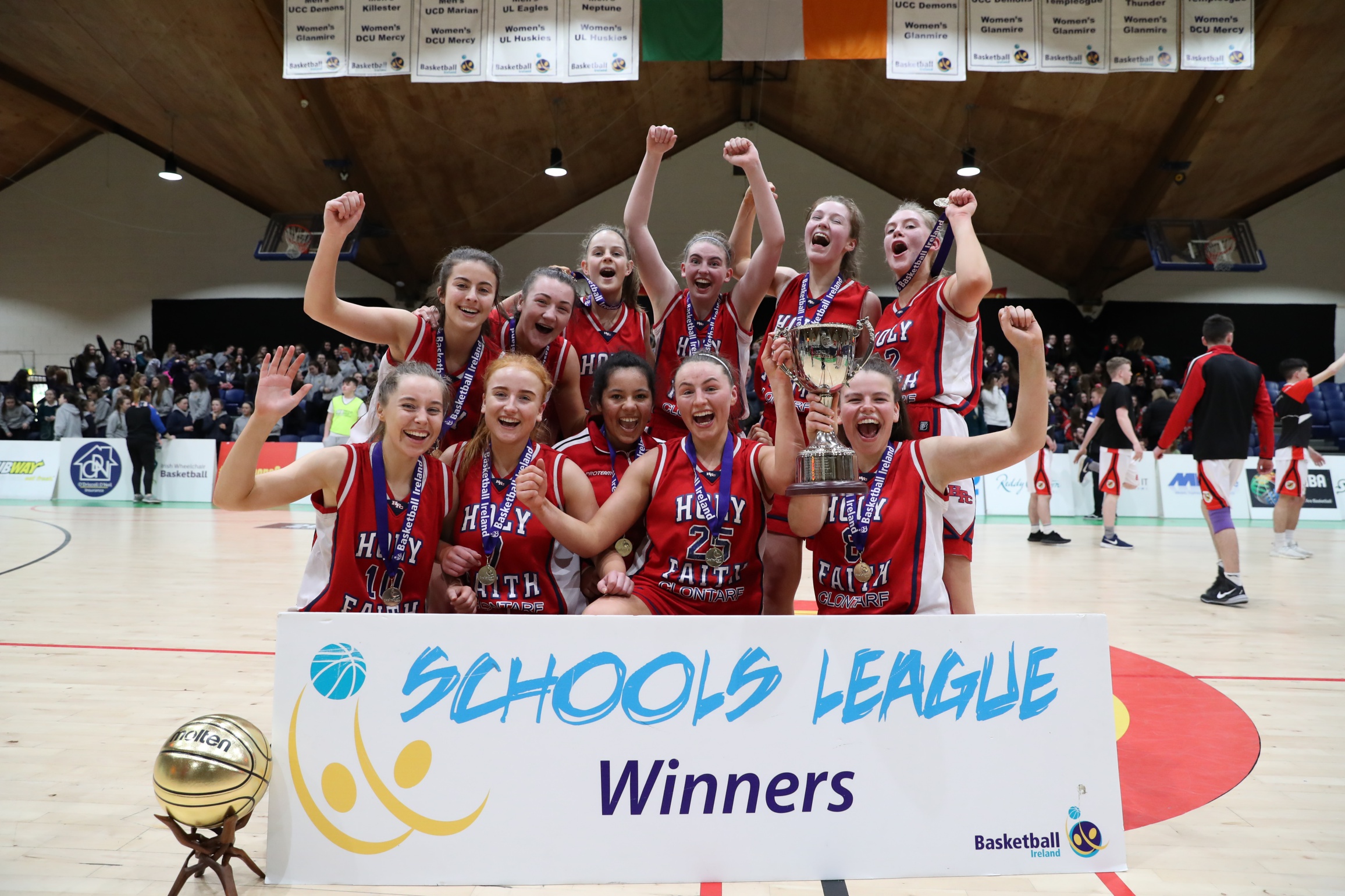 St Brendan’s College in Mayo drove home to All Ireland U19 C Boys Schools League final glory this afternoon with a 38-30 point win over O’Carolan College of Nobber, Co. Meath.

Standout performances from MVP Sean Lavelle, Dara Lennon and Evan Ivers of St Brendan’s helped them into a 34-21 point lead going into the last quarter, and it was thanks to this cushion that they were able to hold off a superb O’Carolan College comeback down the stretch to win.

St Brendan’s had the better of the opening exchanges, with Sean Lavelle and Dara Lennon dominating on both ends of the court and reaping the rewards on the offensive end with some great scores. Adam O’Neill, Niall Bennett and Killian Price were on target for O’Carolan, but it was the Mayo team who held the lead 11-6 at the end of the first.

An evenly-matched second quarter followed with the sides matching each other well at both ends, but St Brendan’s began to find their three point range, with Dylan Walker and Lavelle both hitting two well-taken three pointers to keep the Mayo team out in front. Good work from O’Carolan’s Laochra O Fionnagáin, O’Neill and Price though kept them in the mix, but the half time score was in favour of St Brendan’s, who held the lead 21-14. 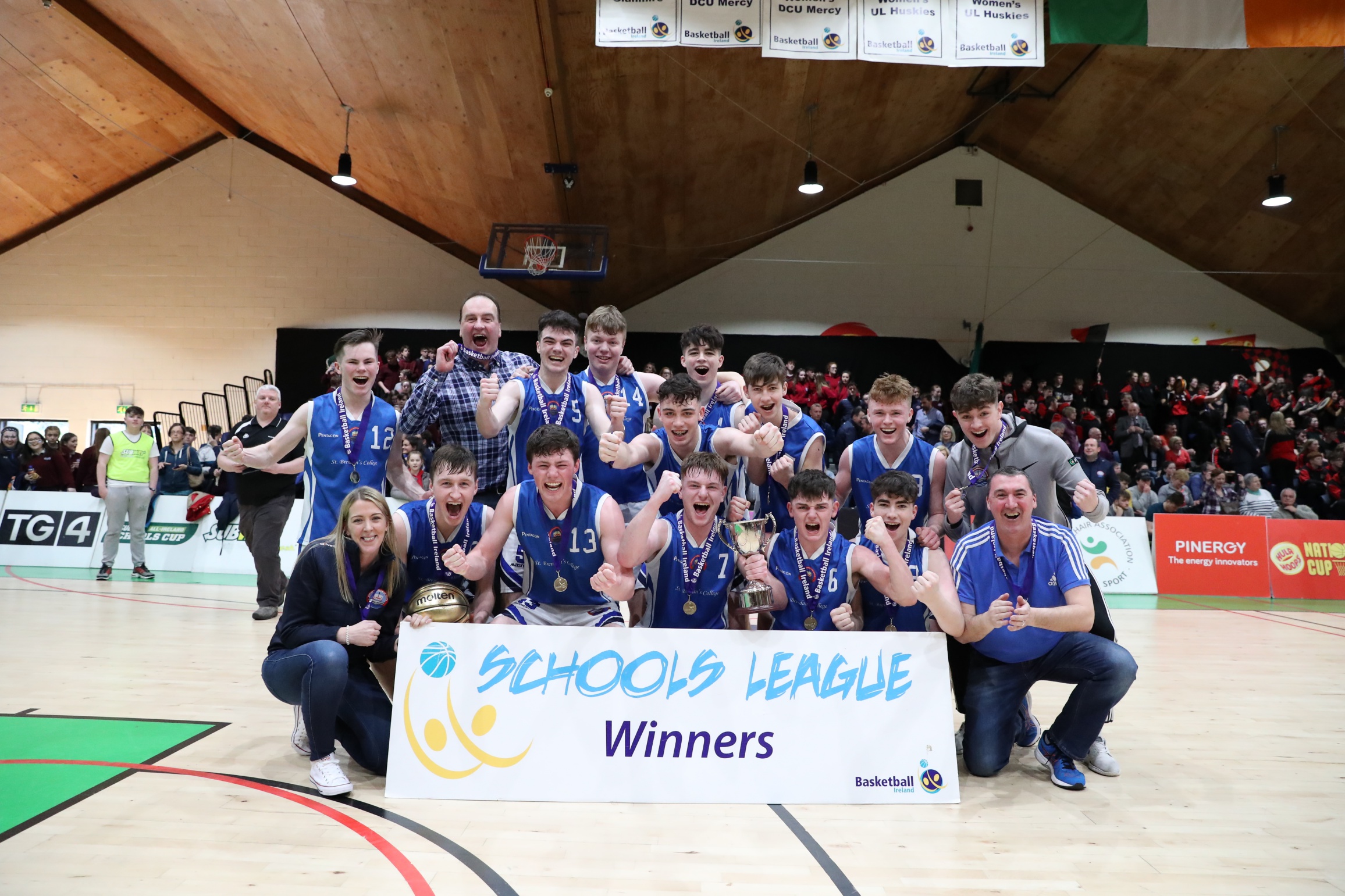 The third quarter was where St Brendan’s began to stamp some authority on the game. Good scores from Evan Ivers, Eoin McDonnell and Aran Reilly saw them widen the margin. Despite a huge third quarter display from Adam O’Neill – who scored all of his side’s seven points in the quarter – Ivers was on hand to deliver a dagger three, and two further points from Walker saw St Brendan’s into a 34-21 point lead going into the last.

The fourth quarter was all O’Carolan College’s though, with super performances from Adam O’Neill, Killian Markey and Daniel Murphy in particular. O’Neill bagged two huge three pointers and super defense from the Meath men saw it - with just over two minutes to play – back to a six point game.  St Brendan’s rallied well though and two vital scores from Shane Togher and Eoin McDonnell was enough for see them home to a 38-30 point win in the end.

The Under 16 C Boys All Ireland Schools League final was a game you couldn’t take your eyes off this morning at the National Basketball Arena in Tallaght as St Mark’s Community School of Tallaght and Castletroy College of Limerick dished up an absolute thriller.

With the lead, and indeed momentum, changing hands multiple times throughout the game, it was St Mark’s who managed to hold on in the end to be crowned champions on a final score line of 54-50.

Indeed it was MVP Dwayne Gonga who hit the crucial scores for the Dubliners in the end, as the pressure from Castletroy was on until the final buzzer, but two big closing scores from Gonga ensured victory for his side.

Castletroy were first off the mark with Rory Cronin bagging two quick baskets in quick sucession. St Mark’s weren’t long getting off the mark though, with a huge three pointer from Jaden Chako getting their first points on the board, and this was followed by a period of dominance by the Dubliners, with scores from Liam Osinuga and Divin Isamala widening the gap further. Castletroy captain Aj Ryan Walsh though had a response, and as the clock began to tick down, hit two big scores, and despite a Dwayne Gonga bucket at the other end for St Mark’s, Castletroy replied with a deep two from Cóilín Keegan to see them trailing by just one point, 12-11 at the end of the first.

A thrilling and extremely fast paced second quarter followed, with Castletroy getting an 8-0 run early on thanks to super scores from Cronin and Keegan. St Mark’s settled once more though thanks to Afeez Oluwa and two huge three pointers from Chako to see the Dubliners trail by just three, 17-20, at the midway mark. More big scores at the other end from Cronin and Walsh kept the crowd on their feet, but just as it looked like the Limerick school would go into half time with a six-point cushion, scores from Osinuga and Gonga closed the gap to just two at the break, Castletroy leading 24-26.

The intensity continued into the third quarter, with St Mark’s ready for battle. Osinuga continued from where he left off in the second, with two quick baskets. Free throws at the other end for Ryan Mullane and Walsh kept their scoring ticking over and a basket from Cronin kept Castletroy’s noses just in front, but again, St Mark’s had a response this time through Gonga and Isamala and soon the sides were level. Momentum began to swing in favour of the Dubliners, with a huge three-pointer from Gonga edging them ahead by three points, and two more baskets from Gonga saw St Mark’s into a 41-34 point lead going into the last.

A huge fourth quarter followed, with Castletroy certainly not going down without a fight and by the midway point, it was back to a two point game thanks to scores from Walsh, Keegan and Cronin. With the game in the melting pot, St Mark’s had to dig deep and it was Gonga who broke the deadlock with a vital score, followed quickly by a super basket from Osinuga. Castletroy weren’t going away though, and Cronin continued to dazzle at the other end, and with 57 seconds to go, it was back to a one-possession game. Step up Gonga though and two huge scores from the extremely talented player saw his side back in front by four points and they held on to win out 54-50.

A clinical second half performance is ultimately what saw Mount Mercy Cork home to All Ireland U16 C Girls Schools League glory this afternoon as they saw off a determined challenge from Loreto College Cavan to be crowned champions on a final scoreline of 26-50.

Superb displays from MVP Tessa Morton, Lauren Crean Hickey and Chloe O’Meara helped their side home to a memorable victory, and it was big fourth quarter along with a stunning offensive final quarter display that ultimately helped the Cork side over the line.

It wasn’t all easy for them though. A strong start from Loreto saw them edge out into a first quarter lead thanks to super shooting from Saoirse Caffrey, Molly Mai O’Meara, Katie Lynch and Jane Lowry. Good work from Mount Mercy’s Tessa Morton, Chloe O’Meara and Abby Murphy kept their scoreboard ticking over, but Loreto held at 17-11 lead at the end of the first. Mount Mercy settled in the second though, and soon found their rhythm with good scores from Lauren Crean Hickey and Tessa Morton – the latter bagging a huge three-pointer to close the gap back to one point with just over a minute left in the quarter. Good work at the other end from Lowry and Leah Bartley though saw them widen the gap once more, and Loreto held a 22-18 point lead at half time. 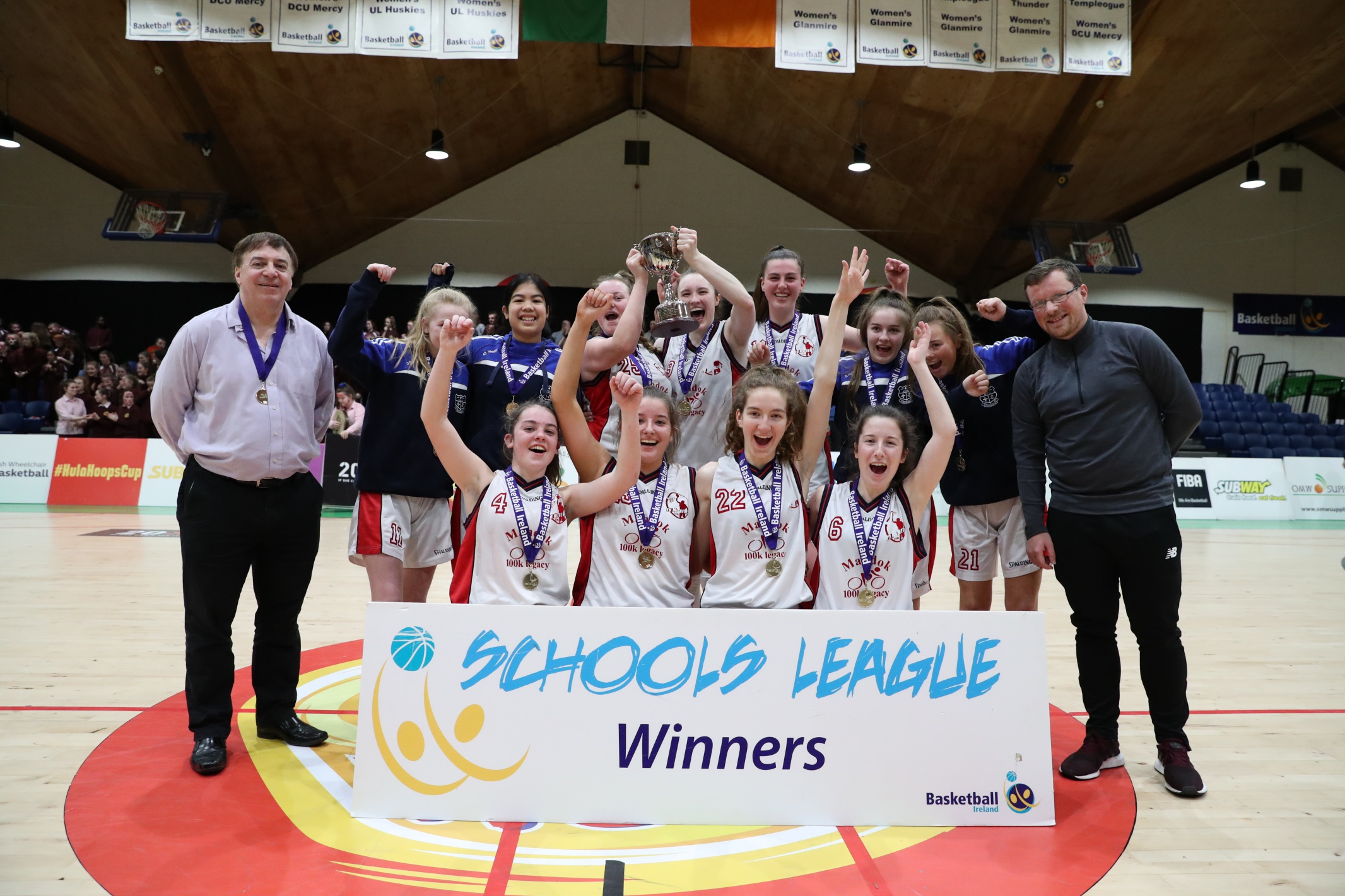 Mount Mercy dug deep in the third quarter though and found another level of intensity thanks to super work from Katie Power, Crean Hickey and Morton to outscore Loreto 5-10 in the quarter to see them into a 26-29 point lead going into the last. The final quarter was where Mount Mercy came into their own though, O’Meara, Crean Hickey and Morton dominated at both ends of the floor, while super scores from Eleanor Coughlan and Power helped push them further ahead. Meanwhile fantastic defense at the other end of the floor from the Cork side kept Loreto scoreless for the quarter, and they drove home to victory after a 21-point fourth quarter to win out 26-50 in the end.