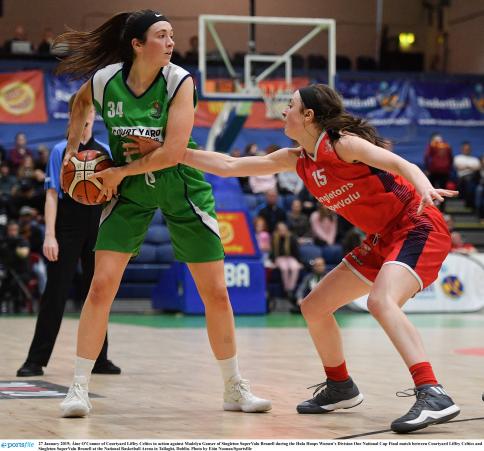 With the winners of all four Basketball Ireland National Leagues now officially decided, all attention turns to the Champions Trophy qualifiers, which tip off around the country this week.

In the Women’s Super League, this weekend sees two thrilling Champions Trophy semi-finals in store at the Barrow Centre in IT Carlow this coming Sunday, with the first game of the day seeing a rematch of the Hula Hoops Paudie O’Connor National Cup final as Cup and League champions, Courtyard Liffey Celtics take on Singleton SuperValu Brunell at 1pm.

Liffey, who have had a historical season already this year winning their first ever senior National Cup and scooping a second back-to-back regular season title, are hoping to push on to the Champions Trophy final in a bid to contest their third piece of silverware of the year, but head coach Mark Byrne knows they face a tough test in the form of Brunell.

“We’re really looking forward to this weekend’s semi-final and another clash with Brunell,” he stated. “We’ve been lucky enough to come out on top in the games against them so far, but we know they’re a very talented team so we’re expecting a tough battle. After a really successful season, it’s a great way to finish off with a chance to compete for the Champions Trophy and hopefully we’ll rise to the challenge and bring a big performance.”

Brunell boss, Tim O’Halloran was also looking forward to the game: “I’m delighted to be in a semi-final and happy that we get another shot at Liffey. I feel we still need to prove that we are a legitimate team and that getting to the final of the National Cup this year wasn’t a fluke. We can do that by going out and performing this Sunday.”

The second match up of the day sees DCU Mercy and Fr Mathews go head-to-head for a third time this season. The sides met just two weeks ago in a second place decider, which DCU won out 77-70, and Mathews’ head coach, James Fleming, stated that his side is preparing for another tough battle this weekend.

“I’m really looking forward to the weekend, this has been an excellent season for us overall as in our first year Super League we came third in the league, got to a Cup semi final and now are in a Champions Trophy semi-final,” he said. “DCU have beaten us twice this year in very tight games so we know we’re up against it, but we will give it our best shot and see where it take us.”

DCU head coach Mark Ingle is also expecting a tough battle stating:: “Our previous two meetings with Fr Mathews were very tight games and we are expecting the same this Sunday. It’s a national semi-final, so these games are always tough, but we are looking forward to it.”

Over in the Men’s Super League meanwhile, the Champions Trophy quarter-finals and semi finals will both take place this weekend. The first quarter-final of the weekend sees UCD Marian face off against Belfast Star in Stillorgan on Saturday afternoon. Marian come into the game off the back of a tough double loss to Garvey’s Tralee Warriors, while Star also suffered defeat in their last regular season game of the year, losing out to Maree last weekend on the road. The winner of this clash will go on to meet League champions, Garvey’s Tralee Warriors in Tralee on Sunday afternoon. Tralee, as league winners, got a bye through to the semi final stages.

The other quarter final match-up sees the meeting of Dublin neighbours Templeogue and DCU Saints at Oblate Hall on Saturday evening. Templeogue come into the game off the back of a road win over Moycullen last weekend, while DCU Saints suffered a loss at the hands of Keane’s SuperValu Killorglin last weekend in their last regular season game. The winners of this clash will go on to face Cup champions, Pyrobel Killester, in the semi final in Clontarf on Sunday. Killester, as Cup winners, were also awarded a bye into the semi-finals.

The Women’s Division One League Cup semi-finals will also be played in Carlow this coming Saturday, with Cup and League champions Maree facing off against Phoenix Rockets, while Ulster University Elks will go head-to-head with Team Tom McCarthy’s St Mary’s in the other decider. While over in the Men’s Division One, Round One of the League Cup takes centre stage on Saturday, with all winners advancing through to the quarter finals on Sunday.

The finals of the Champions Trophy and League Cup will take place at DCU on the weekend of April 13/14th.