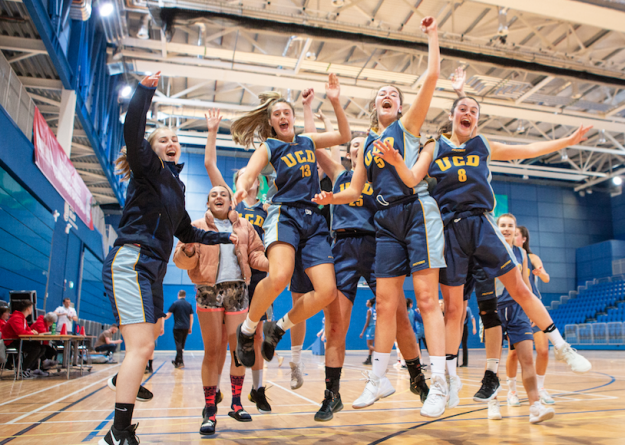 The 2019 Intervarsities finals take place at the National Indoor Arena in Blanchardstown on Sunday, April 7th, You can view the fixtures, results and Youtube links below.

Men's Division A All Stars

Women’s Division A All Stars

Women’s Division B All Stars

Men’s Division B All Stars

DBS were crowned Men’s Division A Intervarsities champions this afternoon thanks to a 76-68 point victory over reigning champions, NUIG, at the National Indoor Arena in Blanchardstown.

A closely-contested affair was in the melting pot right up until the closing minute, when scores from Stefan Zecevic and Joshua Wilson pushed DBS over the line to glory. 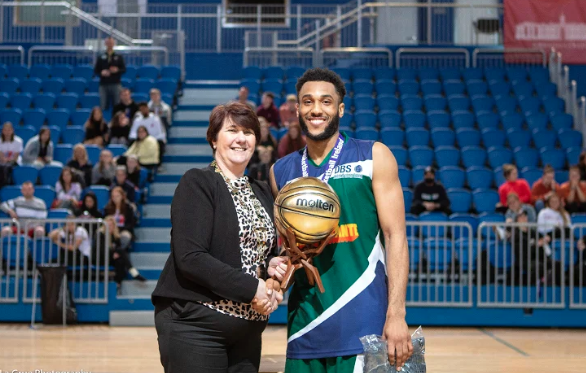 It was a hotly-contested affair throughout though, with DBS taking the better of the opening exchanges, thanks to scores from Cedric Gibaud, Zecevic, Julio Saldana and Wilson to see them into a 20-14 point lead at the end of the first. NUIG’s Eoin Rockall and Stephen Commins began to make their presence felt even more though in the second, dazzling with some superb scores from outside the arc to edge NUIG into the lead at half time, 33-36.

A nip and tuck third quarter followed, with Zecevic and Wilson to the fore for DBS once more, while Rockall, Commins and Tom Rivard continued to cause havoc for NUIG, but it was DBS who held the lead going into the last, 57-50.

An extremely tight and action-packed fourth quarter followed, with Zecevic and Wilson being matched score for score at the other end by Rivard, Commins and Rockall and, with just over two minutes to play, DBS led by 67-65. Less than a minute later, there was still only a point in it before a massive and one score from Zecevic finally put some breathing room between the sides and free throws from Zecevic and Wilson sealed the game on a final scoreline of 76-68. 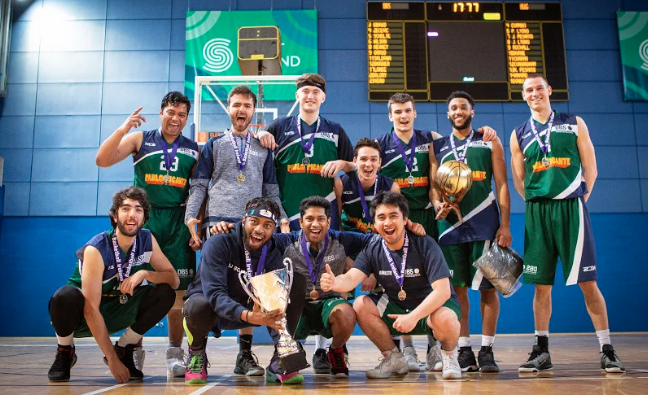 The comeback, led by MVP Sorcha Tiernan and superbly supported by Sarah Kenny, Rachel Huijsdens and Rebecca Rabeiro, got underway in the second quarter after DCU closed the first quarter 26-13 points to the good thanks to great scoring from Samantha Hyslip and Aine McDonnell. By the midway point of the second quarter though, momentum started to swing in favour of Trinity, with huge defensive work from Sorcha Tiernan sending Simone Hobdy, Rabeiro and Kenny to the basket to see DCU’s lead cut back to 42-33 going in at half time. 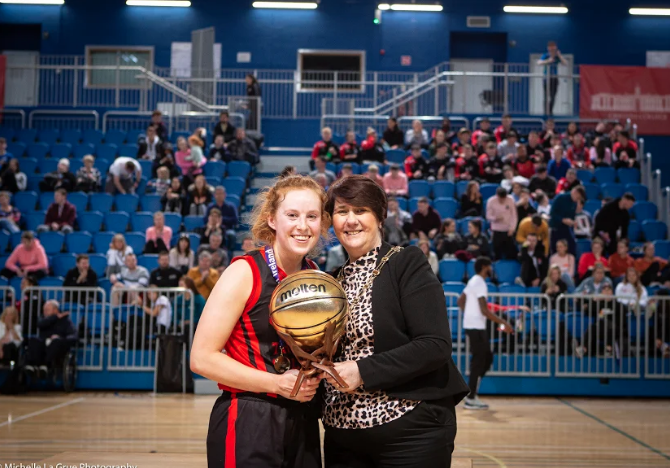 Trinity started the third quarter as they had finished the second and, despite stand out displays from Megan Connolly and a good score from Aoife Maguire, Trinity outscored DCU 24-8 in the quarter, with the bulk of their scoring coming from Tiernan and Huijsdens to lead 50-57 going into the last.

A tight fourth quarter followed, with Hyslip finding gaps under the boards for DCU to bag the opening two scores for Mark Ingle’s charges. Further scores followed from Aoibheann Byrne and Connolly, but TCD kept their noses in front, led by a fantastic fourth quarter display from Hobdy and she, along with Tiernan, closed out the scoring for the day to see home a memorable victory for TCD on a final scoreline of 64-70. 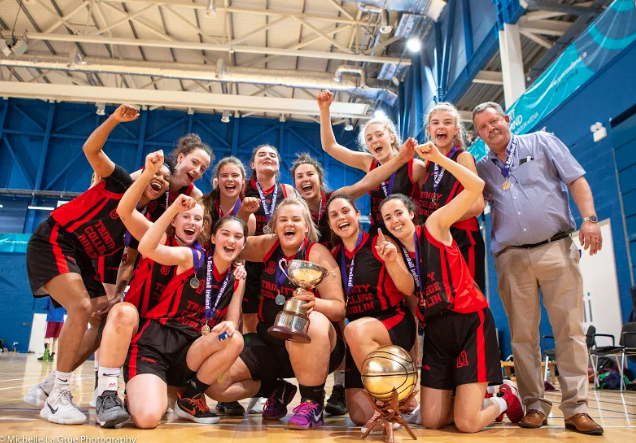 UCD stormed home to the Women’s Division B Intervarsities title this afternoon as they came back from behind to win out by 10 points against a tricky LYIT team.

Led by a stand out MVP performance from Verity O’Connor, UCD began to chip away at the LYIT lead as the third quarter ticked down with , with good scores from Lauren Flynn and O’Connor closing the deficit down. Superb displays from LYIT’s Jaelyn  Tweedy and Adiya Henderson kept their noses in front going into the fourth, as they held a 47-38 point lead, but UCD were far from done. A huge fourth quarter performance from the Dubliners saw their pace and depth begin to show. With just seven players on the LYIT roster (who were also missing the services of dual star, Aisling Nee) and with Tweedy and Henderson tiring, UCD began to take advantage and O’Connor, Catherine Connaire and Aoife Ryan rained in the scores to see it at a two point game (51-49) with just over five minutes to play. 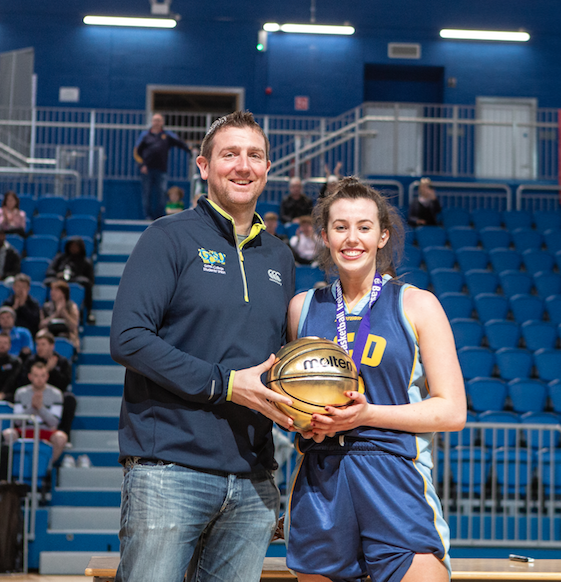 Connaire tied the game level at 51 points apiece just a minute later and momentum was firmly in UCD’s favour. Scores from Ruta Balenztyte and Tweedy at the other end just weren’t enough in the face of huge UCD pressure, and further scores from Sinead Byrne, O’Connor, Lauren Flynn and O’Connor once more sealed the title for UCD on a final scoreline of 53-63.

UL retained their men’s Division B Intervarsities title in style this afternoon with a 69-87 point win over Maynooth University in the final.

A stunning 37-point display from Maynooth’s Paddy Sullivan just wasn’t enough in the face of a deep and well-drilled UL team, with Dylan Corkery, Keelan Crowe, Finn Hughes and Diarmuid O’Shea some of the standouts in an all round solid team performance.

UL got off to a big start in the first, with scores raining in from O’Shea, Corkery and Crowe. Big work at the other end from Sullivan and Finn Hughes kept Maynooth’s scoring ticking over, but UL held a 17-29 lead going into the second. Momentum stayed with UL into the second, with O’Shea and Vitatistis dominating the scoring for the reigning champions, but again, Sullivan led the way for Maynooth with a huge three getting their scoring underway in the second, with Hughes and Rory Connell adding scores to see the half time score 29-45. 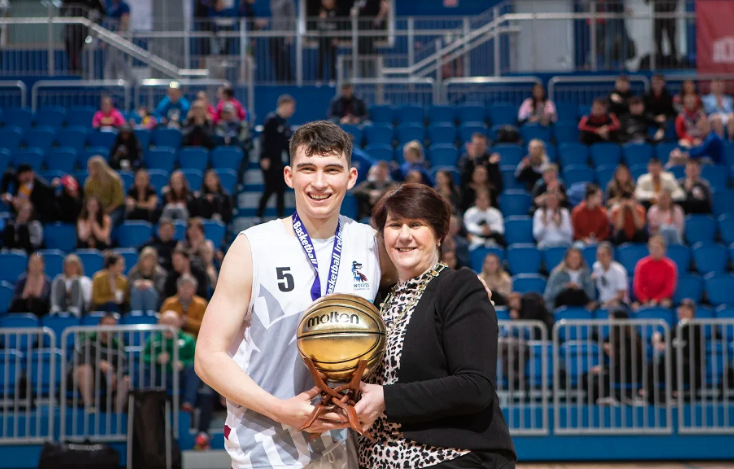 It looked like the pace of the game would remain the same in the third, but Maynooth and Hughes and Sullivan had other ideas. A massive surge midway in the third saw scores dropping from both shooters and big defense inside helping to close down the UL offensive threats. Luke McLoughlin added some super baskets to bring the game right back into the melting pot and they had closed the gap to just two points, 57-59 going into the last quarter – outscoring UL 28-14 for the period.

The holders dug deep in the fourth though, and led by Corkery, began to widen the margin out once more. A huge three from O’Shea followed, with threes from Crowe and Corkery widening the gap even further, and despite the best efforts of Sullivan at the other end, UL held out defend their title well, 69-87. 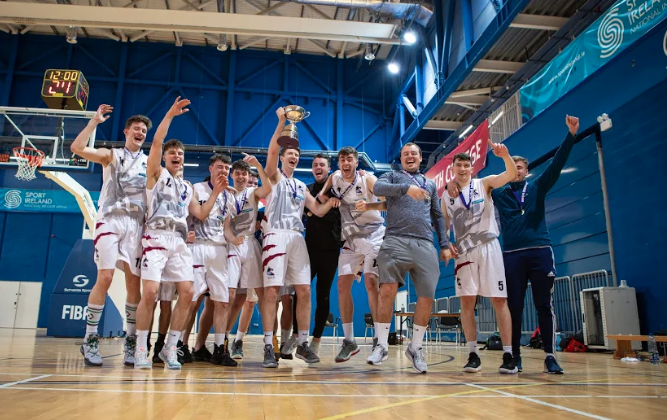