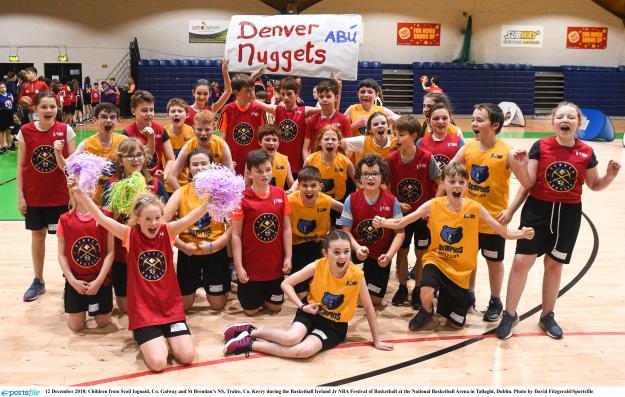 Basketball Ireland has today launched the second year of the Irish Jr. NBA League, which will tip off in September 2019.

The league will follow the same format as last year, with ten clubs being selected to partner with local schools. Clubs will be responsible for delivering the Jr. NBA programme locally before the National Festival of Basketball caps off the programme in December.

Looking ahead to this year’s league, Head of Development at Basketball Ireland, Jason Killeen stated: “We are really excited for the second year of the Jr. NBA. Last year, over 2,000 children got involved with basketball through the participating schools and clubs, and we’ve already seen over 100 children start their long-term journey in basketball by joining clubs. This year, we are going to have ten new clubs and thirty new schools, which means there are opportunities for even more children to play in the Jr. NBA.

As part of the league launch, Basketball Ireland is also delighted to confirm that DeCare Dental are going to partner with the Jr. NBA for an additional two years.

Speaking about the partnership, Commercial Manager Conor Meany stated: “We are delighted that DeCare Dental are going to be involved with the Jr. NBA for the next two years. DeCare’s healthy lifestyle ethos fits well with what we are trying to achieve through basketball and we look forward to working together and growing the league together.”

Maureen Walsh, CEO of DeCare Dental, added; “As corporate partner, DeCare is thrilled to team up with Basketball Ireland and the Jr. NBA on this important journey. This collaboration is a meaningful way to support the values that sport, such as basketball, instil in kids for life. This partnership is the start of something wonderful and we have already experienced the teamwork, fun, overall health and quality of life benefits that this partnership brings to life.”

Any club wishing to take part in the Jr. NBA should contact jrnba@basketballireland.ie expressing their interest in getting involved by Friday, May 3rd.