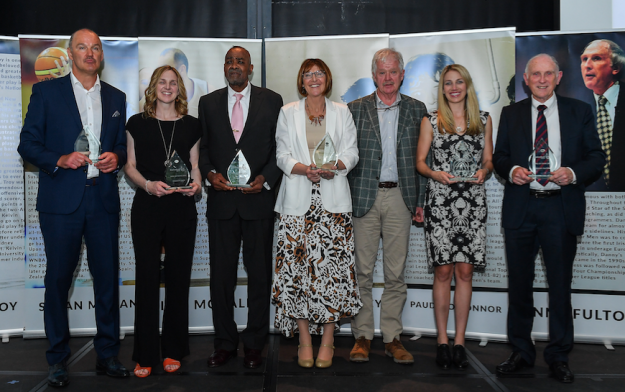 View all the photographs from today's event on: www.sportsfile.com

Croke Park was the place to be this Saturday, May 11th, as the 2018/19 Basketball Ireland Annual Awards and Hall of Fame ceremony was held at the iconic stadium.

Siobhán and Susan both had the unique honour of being the first two women inducted into the Basketball Ireland Hall of Fame, while Kelvin Troy was the first American to be inducted.

Speaking afterwards, the six inductees were overwhelmed by the honour and the support on the day, which saw each of them receive a standing ovation for their contribution to Irish basketball over the course of their careers.

“It’s so special, I’m so honoured,” said Susan Moran afterwards. “No matter where I go, I’m so proud to be Irish and I like flying the basketball flag for Ireland. To be nominated for this makes me feel like Ireland might be a little proud of me too, so I’m honoured to be here.”

We caught up with Susan after the event to hear her reaction to the honour.

Liam McHale was also thrilled to receive the honour stating: “It’s been a wonderful day, I am delighted. This isn’t just an individual award, there was a huge community behind us, we had great support and a great committee and it means an awful lot. We had the time of our lives doing it, and we were lucky we got to compete with some of the best teams.”

Listen to what Liam had to say afterwards below.

Picking up the award on behalf of his late brother, Paudie, Seamie O’Connor said: “It’s a huge honour for the O’Connor family and for the people of Killarney. We’re thrilled. As a family, we are tremendously overawed, and we’re delighted to be here.”

Check out what Seamie had to say after the event below:

Catch Kelvin's full reaction to the day below:

Danny Fulton remarked afterward: “I’m delighted. I had a great day, and I loved seeing people I hadn’t seen in 30 or 40 years so it’s been terrific."

Check out our full catch up with Danny below.

Siobhán Caffrey added: “I’m so proud and honoured to be here. It was fantastic to reminisce and to see the passion that is here for basketball and the joy in that room today was incredible.”

Club of the Year: Mulroy Hoops

Boys A School of the Year: St Joseph’s The Bish, Galway

Girls A School of the Year: Holy Faith Clontarf

Girls B School of the Year: Colaiste Pobail Setanta

Male U16 Schools Player of the Year: Brian Gaffney (St Joseph’s The Bish)

Primary School of the Year: The Teresian School, Donnybrook

Women’s Division One Player of the Year: Claire Rockall (Maree)

Women’s Division One Coach of the Year: Joe Shields (Maree)