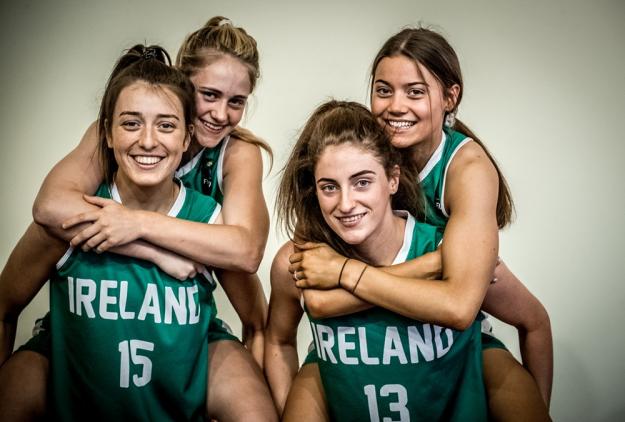 The Ireland Under 18 women’s team stormed home to a comprehensive 60-39 point victory over Austria this afternoon in their opening game at the 2019 FIBA U18 Women’s European Championship Division B in Skopje, North Macedonia.

Dominating three out of four quarters, the Irish put in a clinical and determined performance, with Abby Flynn, Katie Williamson (who notched an impressive double-double of 11 points and 11 rebounds), Alex Mulligan and Deborah Ogayemi leading the charge for the women in green.

A tricky opening quarter for the Irish saw Austria matching them well, coming back from trailing 14-8 at the midway mark to close the gap back to just two points. Veronika Heiss proved to be a huge threat for the Austrians and her prowess inside, coupled with strong defense from her side saw the pressure on Ireland. Composure from Flynn and Mulligan though, coupled with a basket from Erin Maguire, settled Ireland once more and they led 22-17 at the end of the first.
A nervy start to the second for the Irish followed, but again, Mulligan was on hand to calm the side, landing a big three early on to kick off a 13-0 run for Ireland, which included super scores from Katie Walshe and Ogayemi. Austria finally broke through the solid Irish defense with three minutes to go in the quarter to add to their tally, and they added another score shortly after, but the Irish were dominating and took a 38-25 lead into the dressing room at half time.

A commanding third quarter performance followed, with Ireland keeping Austria off the scoreboard for the entire opening five minutes, and Williamson dominating the boards inside to push them further into the lead. Austria pulled some scores back as the clock ticked down, but Ireland were comfortable going into the last on a 52-31 point cushion. A scrappy fourth quarter followed, but some good shooting from the Irish saw them widen out the margin even further. A bright spell from Austria was rewarded with some good scores, but the damage had already been done and Ireland drove home to victory 60-39.