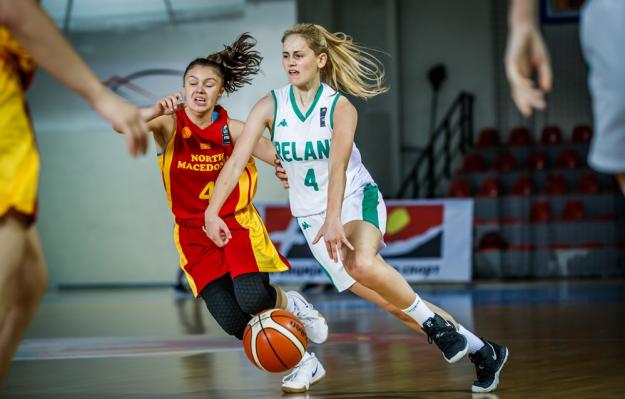 A stunning display from Waterford’s Abby Flynn this evening helped Ireland over the line to a third win from three games at the 2019 FIBA U18 Women’s European Championships in North Macedonia, winning out 70-58 against Slovakia.

Flynn put in a superb display throughout, but particularly in the closing 12 minutes of the game, stopping a Slovakian comeback in style to finish with 15 points, five rebounds, nine assists and four steals. After trailing by 13 points to the Irish at half time, Slovakia brought the game back to within just five points as the third quarter ticked down, but clinical rebounding from Flynn and a run of scores from the savvy point guard saw Ireland widen the gap once more and take home a crucial victory in Group C.
An absorbing affair from the outset, Flynn was well-supported throughout by a talented cast that included another standout display from Katie Walshe, Katie Williamson, Debbie Ogayemi and Mia Furlong. A tricky opening quarter saw scores at a premium, with both sides tied at four points apiece with over six minutes gone, before Walshe, Flynn and Ogayemi added some well taken scores. Slovakia had an answer to everything though, and responded well through Miriam Istonova, but some clever play from Erin Maguire set up Walshe for a strong score to see Ireland lead by the minimum, 12-11, at the end of the first.

A stand out second quarter performance from the women in green was one of the big talking points of the game, as they put in a 19-point quarter to power into a commanding 31-18 point half time lead. Free throws from Maguire got the scoring underway, before Williamson added a strong jump shot and Furlong came off the bench for a fantastic score. Alex Mulligan continued to make her mark on this tournament with a superb score, with Walshe, Furlong and Walshe again adding yet more buckets to see Ireland into a 15-0 run against a rattled Slovakia. Massive defensive intensity from all of the Irish squad - with superb work in particular by Niamh Kenny, Lauren Darcy and Siofra O’Shea - kept Slovakia off the scoring for almost seven minutes of the quarter, to hold a 31-18 point cushion at the half.

Slovakia certainly weren’t going down without a fight though and they put in a massive 21-point third quarter to bring the game right back into the melting pot. Scores from Mulligan - thanks to good boards from O’Shea - saw momentum with the Irish early on. Walshe, Williamson, Mulligan and Ogayemi added more baskets to edge Ireland ahead 43-27 with four minutes to play in the third, but Slovakia had more to come, going on a 12-0 run to close the gap back down to just five points. Flynn took the reins of the game though, driving a superb score home with 41 seconds to play, before securing a massive defensive rebound at the other end and following it up with a score to see Ireland back into a 10-point lead going into the last (49-39).

O’Shea opened the scoring in the fourth with two coolly taken free throws and again, it was Flynn who chipped in with a fantastic steal on the defensive end to go straight down the other end and hit home a massive three-pointer. Flynn added another bucket moments later, before Williamson chipped in with a big score to widen the margin out to 60-42. Captain Katie Walshe added more scores and, with points raining in from Furlong and Ogayemi, Ireland held tough in the face of big Slovakian pressure to win out 70-58 in the end and secure their third win from three games.

Speaking afterwards, assistant coach Liam Culloty said: “We’re delighted with the win, the girls played really well, especially in the first half. Slovakia came out and did a really good job in the second half... they had a great run, but we responded to everything they gave us. We’re delighted with the win, that’s three on the trot now and on we go to the last two games in the group.”

The squad has a rest day tomorrow [Monday] before facing Greece on Tuesday. Greece also go into the clash unbeaten at the top of the table.