RECAP: Russia too hot to handle for Ireland U20 Men

home / news / RECAP: Russia too hot to handle for Ireland U20 Men

RECAP: Russia too hot to handle for Ireland U20 Men 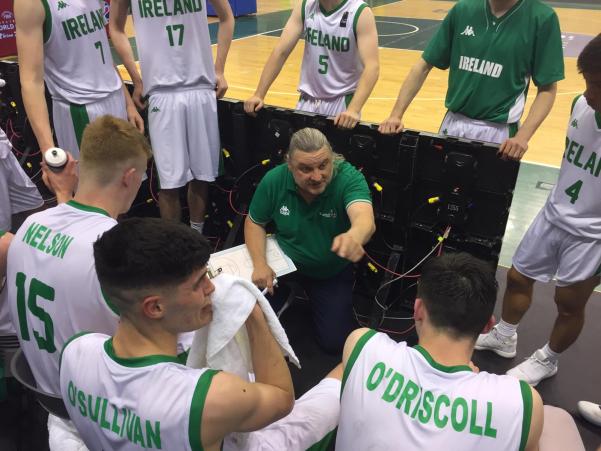 A classy and clinical display from Russia saw them overcome Ireland Under 20 men 124-48 in the opening game at the FIBA U20 Men’s European Championship Division B in Portugal this afternoon.

The Russians, who are one of the favourites to win the tournament, were in form from the off, averaging 28 points per quarter in a dazzling offensive performance, but also using their height and size inside to clean up on the boards. Stand out performances from Yury Umrikhin, who finished with 21 points, and Maksim Karvanen, who had 19 points to his name, were just two in a long list of offensive threats for the Russians as they put on a shooting exhibition in Portugal.

Early foul trouble for the Irish was one of the biggest problems of the game, with the impressive Tadhg Crowley fouling out early into the third quarter. Indeed, the opening exchanges of the first quarter were dominated by fouls from the Irish, as Russia went to the free throw line three times in the opening two minutes and opened up an 8-0 lead. Ireland kept with them for the remainder of the quarter though as Eoin Nelson opened Ireland’s account a few seconds later, and scores from the on-form Darragh O’Sullivan and Conor Liston followed, with Eoin McCann adding a third basket to keep the game in the mix. Russia got out and ran then, throwing down some big dunks, but a nice score from Liston and a dunk from O’Sullivan kept the Irish fans on their feet. It was Russia who led the way at the end of the first, 26-15.

O’Sullivan and Crowley opened the scoring for the Irish in the second quarter, with the latter adding a put-back dunk seconds later to close the gap back to just six points. Free throws for the Russians at the other end widened the margin as Ireland’s foul trouble persisted, and they moved into a full court press defensively, costing Ireland a number of turnovers and seeing the Russians add nine points without reply. Cillian O’Driscoll stemmed the tide with a good score, and a Liston basket was followed by a fantastic stop by O’Sullivan. It wasn’t enough though, as unforced turnovers continued to haunt the Irish as the clock wound down and the Russians went on a 15-0 run before McCann got Ireland’s last score of the half from the free throw line. Russia weren’t done though and added another six points before the buzzer to lead 62-29.

A long three from Kris Arcilla, a quick bucket from Crowley and a free throw from Eoin Nelson got proceedings underway in the third, but Ireland were dealt a major blow minutes later when Crowley was fouled out of the game. A big three from O’Sullivan settled things once more, and as Ireland continued to drive hard, the Russians were in team foul trouble with six minutes to play in the quarter. Free throws from Liston followed, while Nelson secured a good three-point play, but that was to be Ireland’s last score of the quarter as the Russians again ran the floor hard and closed the quarter with a 14-0 run to lead 93-44 going into the last quarter.

The Russians took complete control in the fourth quarter, keeping Ireland off the scoring for the opening five minutes and adding 15 points to their tally to exceed the 100-point mark. A dunk from O’Sullivan was one of only two scores for the Irish in the quarter - with James Lyons getting the second as the clock ticked down - but Russia continued their offensive rampage, and ran out 124-48 point winners in the end.

Speaking afterwards, head coach Mike Lynch stated: “It is a tough loss. We’re coming up against potentially the favourite team of the tournament, but I think in the first two quarters we were there or thereabouts. I think our lack of experience together as a team showed... The lads really, really tried though. One of the things now will be to regroup – we still have other games and if we’re able to stay with a team like Russia for two quarters, we can do more. We’ve a lot to do in this tournament and we won’t give up that easily.”