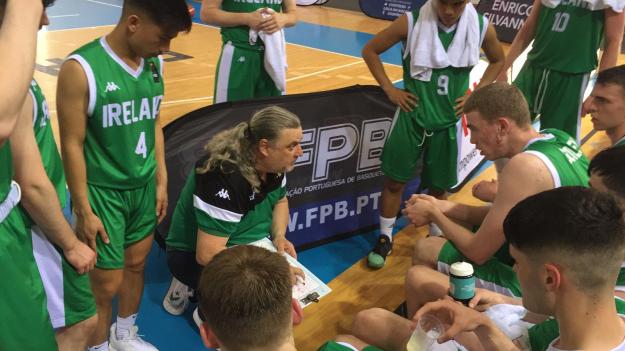 In Portugal, the Ireland Under 20 men face Belarus on Tuesday in their last group game at 18:15 in the FIBA U20 Men’s European Championship Division B. Coming off the back of a vastly improved performance in the loss to Hungary, last Sunday, the Under 20 men are looking forward to their final group game. Darragh O’Sullivan and Eoin Nelson were both in double digits scoring on Sunday and with five more of the team also getting on to the scoresheet it is a sign that the men in green are starting to find some rhythm. Their first half performance from the Hungary game is a clear sign of what this team is capable of and they will be looking to bring that intensity and execution from the start and for four quarters against Belarus.

One concern for the camp is the injuries picked up by James Lyons and Cillian O’Driscoll over the weekend, head coach Mike Lynch will be hoping that they respond well to treatment and become available as the tournament progresses. Belarus have some exciting talent particularly in the forward positions with Dzmitry Ryuny and David Odiah both having had big scoring games for our opponents and Ireland know they will have to limit these two in particular to ensure they are in the mix at the end of the game on Tuesday.

Looking ahead to the game, head coach Mike Lynch stated: “After yesterdays game we felt the team played far better and much more to their potential, especially in the first half. However, there are areas that we feel we should have done better in and with the games coming think and fast we must learn from these without delay. At this level mistakes get punished and having identified these, we must now learn and move on. We want to continue playing hard defence and execute our sets, we are looking forward to the Belarus game, which we know will be tough but the mood in the camp is positive and we’re ready for the challenge ahead”.