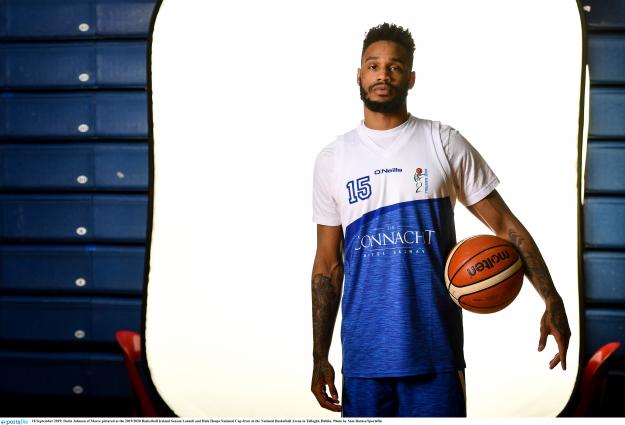 It took overtime to separate Coughlan C&S Neptune and Maree in Cork on Saturday evening, with Maree picking up the win in the end, 92-99. The game was close throughout with neither team able to hold a comfortable lead as they matched each other score for score. Maree narrowly led 40-45 at the half, thanks to well balanced scoring from Oriol Balsells Plaza, Kenneth Hansberry and Paul Freeman. The battle continued in the second half though, with Cian Heaphy causing havoc for the Maree defence, while Lehmon Colbert's scoring and inside presence proved instrumental for the hosts in the fourth quarter as the game finished all square on 81-81. The battle continued in overtime but in the end, Balsells Plaza and Darin Johnson had the magic touch for the visitors in the dying moments of the game to win out 92-99 and make it four straight wins for Maree going into the New Year.

Maree head coach Mike Lynch stated: “Tonight was a very important win for us, especially on the road against a team like Neptune. Post-Christmas games are always tricky to call, but we trained over the last two weeks and it certainly paid off for us tonight. We knew going into the game that Neptune have developed a strong inside game and still are one of the quickest in transition. Defensively, we worked very hard and this paid off for us, capitalizing on deflections and steals which we converted off the break at key times during the game. The players are aware of their roles and we are getting great contributions from the bench. Neptune made a lot of substitutions in the first two quarters, but you must be able to adjust to this quickly, which I felt we did tonight. Cian Heaphy made things difficult with his drive to the basket which was key to Neptune staying in the game. Kenneth Hansberry did a great job for us on the boards both in offence and defence and contributed with hard earned points. Two steals from Paul Freeman in consecutive offences gave the team a real boost, while Kenneth pulled off shots that only he can do. Point guard duties were shared tonight between Eoin Rockall and Orioles Balsells Plaza. Orioles has been able to free Eoin up to play more in the shooting guard position and he has made a great contribution this season. Steven Cummins contributed tonight with deep threes which kept us ahead when Neptune began a run. Charlie Crowley brought great intensity on defence. We had an opportunity to finish the game off with a base line out-of-bounds with 10 seconds to go, but we failed to get a shot off. We were still happy to be going into an overtime period. We have had a lot of close games this season and this was our second game which went to OT. We knew we had the ability to see the game out once we stuck to our game plan, and we able to stay out of foul trouble. This was our fourth win in a row and is exactly the start we needed for the second half of the season. All the squad are working hard, and I am delighted that their efforts are paying off.”

Fellow Galway side Moycullen were also celebrating the end of 2019 in style as they managed to hold out to get a big 69-60 home win over Pyrobel Killester Saturday evening. The home side kept Killester at arm’s length in the first half, 40-31. Good scoring from Grant Olsson and Dylan Cunningham helped Moycullen increase the lead and leave Killester with a lot of work to do going into the final quarter. Killester were not going down without a fight though, and kept battling right to the end. John Behan was to the fore for the Dublin side, but despite Killester's best efforts, it was just too late as Moycullen pushed on to win by nine in the end.

Speaking afterwards, head coach John Cunningham said: “I'm thrilled with the win. With the way the games fell, we had to ask for some big sacrifices over Christmas and around Stephen's night which is usually a big event in Moycullen tied in with our Christmas blitz. Thankfully, the guys got their reward today. I feel a bit for Brian and Killester as they have had a rough run of injuries and they battled to the end, adding to the grey hairs that have been appearing for me over the last few years! I must give credit to my guys though. We played some excellent basketball at both ends in the first half and, despite struggling at the offensive end as the game wore on, our defence never let up and was the difference in the end. Any win in this league is a big win and, despite our record, we feel we can compete every night and that’s what we’ll continue to do.”

DCU Saints saw off the test of Abbey Seals Dublin Lions in their Dublin derby on Saturday evening in Clondalkin, with an 70-78 win. Saints started the better of the two teams led by Mike Bonaparte and Kevin Lacey as they edged a 33-38 point lead at the half. Lions rallied back with Jarrett Gray and Finn Hughes finding their range from behind the arc and soon had pushed into the lead. Saints' rallied hard though, and back-to-back three pointers from Lacey coupled with the composure of Bonaparte from the free throw line helped DCU to earn some breathing space to secure the away win.

Speaking afterwards, Bonaparte said: ”I must tip my hat to Dublin Lions, they did excellent. Lions didn’t give up, I thought they were going to call it quits when we gained a seven-point lead, but they adjusted their defence and let certain guys that weren’t comfortable shooting to shoot. Lions went up but a we called a timeout to help slow them down, and after that we played the game at our pace and the experience showed. It was just a matter of managing the clock after that and thankfully we hit some shots and it went in our favour."

Tradehouse Central Ballincollig finish 2019 still unbeaten at the top of the Men’s Division One table thanks to a 64-85 point win over Portlaoise Panthers in Portlaoise on Sunday afternoon. Andre Nation and Ciaran O’Sullivan led the charge for the visitors as they drove into a big 14-31 point lead at the end of the first quarter, and continued to dominate at the half, leading 24-47. Good displays from Mantas Vilimas and Sean Condon of Portlaoise just wasn’t enough in the face of a clinical Ballincollig side, who head into 2020 with a perfect 13-0 record.

EJ Sligo All-Stars pushed second-placed Fr Mathews all the way on Saturday evening, but lost out by six points in the end, 70-76. Sligo edged the opening half, leading by five at the break, 42-37, thanks to scoring from Alvaro Romo and Carson Long. Fr Mathews dug deep though and big scores from Jarvis Pugh and Luke O'Mahony pushed them back in front in the fourth quarter. Sligo tried their best to rally back but Mathews had the momentum, and converted their free throws down the stretch to help them home to victory.

Limerick Sports Eagles earned a convincing 67-101 point away win over Waterford Vikings, with Reece Dupler and Diarmuid O’Shea leading the charge with a combined 43 points. Craig O’Neill put on a strong display for the Vikings, but a huge defensive performance and clinical offensive execution saw Eagles run out comfortable winners in the end.

Scotts Lakers St Paul’s Killarney ran out winners over IT Carlow Basketball on Saturday afternoon, with Toby Christensen and Brian O’Neill shining for the Kerry side, as they saw home a 70-111 point away win. Kevin Donohoe put on a good showing for IT Carlow Basketball, but St Paul's offensive performance kept them in the lead throughout and they won out well in the end.