PREVIEW: We look ahead to the Hula Hoops Cup semi finals

home / news / PREVIEW: We look ahead to the Hula Hoops Cup semi finals

PREVIEW: We look ahead to the Hula Hoops Cup semi finals 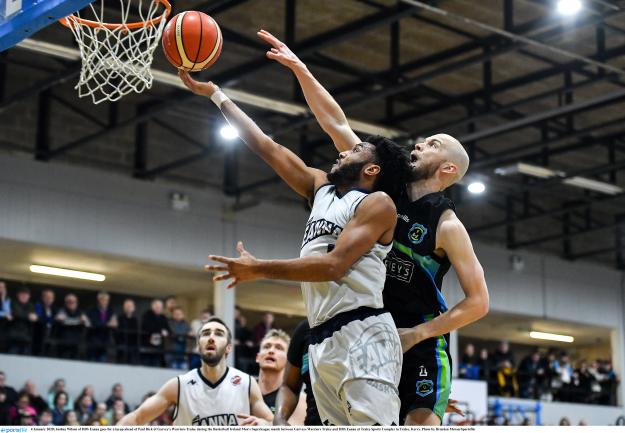 The 2019/2020 Hula Hoops National Cup semi finals will take centre stage in Cork this weekend, as the first of 18 semi-finals tips off at Neptune Stadium on Friday evening and will run throughout the weekend at Neptune and Parochial Hall.

In the Women’s Paudie O’Connor National Cup two interesting battles await. The first semi-final sees Ambassador UCC Glanmire facing off against Pyrobel Killester in a hugely-anticipated battle. Both teams come into the game in strong league form, with Killester on a three-game winning streak, while Glanmire have dropped just one game in their last five. Glanmire had the better of the exchanges in their last encounter in Cork in November, winning out 95-75 in an assured and clinical display. Killester have regrouped well since then though, and with Irish stars Aisling McCann and Rebecca Nagle consistently shooting well, coupled with the threat of Americans, Adella Randle El and Christa Reed, they will be hoping that they can do enough this time around. Glanmire also have many weapons in their ranks, with Shrita Parker one of the standout performers throughout the league at the moment, while fellow American Tatum Neubert has also been causing problems for other teams. Irish stalwarts Aine McKenna and Casey Grace have been consistently solid for Mark Scannell’s charges in their recent games, ensuring that this game is set to be one of the big ones of the weekend.

Looking ahead to the clash, coach Scannell stated: “I’m looking forward to playing against a very good and in form Killester team. We have to plan and prepare well as they are a tough matchup with a good balance of Irish players, two good Americans and a very good coach. We need to play the game now and not the occasion. We respect Killester, they play with great freedom and we will need to make life difficult for them. I think the fans will be treated to a classic.”

Also looking ahead to the game, Killester boss, Karl Kilbride stated: “We’re obviously very excited. It’s been four frustrating years since we’ve been here and we’re looking forward to the opportunity. Glanmire will obviously be going into the game as hot favourites for a number of reasons: how well they’re doing in the league this year, how our game went when we played them earlier in the season and also the fact that it’s in Cork. But while we may be underdogs, we certainly won’t lack confidence and a desire to win. We truly believe the best version of us is capable of beating any team on any day.”
The second women’s semi final sees a showdown between 2018 champions DCU Mercy and 2019 Cup finalists, Singleton SuperValu Brunell. DCU will be hoping they can make their way back to the Arena this year after losing out in the Cup semi finals last year to eventual winners, Lexilip Amenities Liffey Celtics. Mark Ingle’s charges currently sit top of the league with just one loss to date this season and boast a hugely talented Irish core, along with two strong Americans in Meredith Burkhall and Ashley Russell. Brunell are sitting eighth in the league but have been playing better than their record suggests. Although they are without the services of Amy Waters this season, Sinead O’Reilly has been a welcome addition, while Danielle O’Leary, Katie Walshe and Treyanna Clay have been key for them.

Looking ahead to the clash, Brunell boss, Tim O’Halloran stated: “As a coach I am very excited about the game but we’re under no illusions the task that is in front of us. DCU are the best team in the league with a top coach so we will have to just see what happens and hope for the best.”

DCU’s Mark Ingle added: “We’re feeling great going in, but it doesn’t matter how we feel. It’s whether the players are ready and prepared and are in good shape – that’s what matters when it comes to big games. The Cup is always slightly different, I don’t know why, but it is. It’s a big game, there’s tension, but we’ve played in enough of them at this stage to know what we’re doing. We’ve a lot of players who’ve played in semi finals and finals and won them. We’re looking forward to the game and looking forward to playing it. I’d imagine Brunell will be fancying their chances, so it’ll come down to the day and hopefully we’ll have the work done.”
Over in the Men’s Pat Duffy National Cup meanwhile, Neptune Stadium is also the place to be as two big games tip off Saturday, with the first semi final seeing DBS Éanna facing off against Garvey’s Tralee Warriors for the second time in seven days, while Griffith College Templeogue will go head-to-head with hosts, Coughlan C&S Neptune in the 8pm tip off. Tralee and Éanna dished up a thriller in Kerry last weekend, with the hosts just managing to hold off a big Éanna comeback at the death to win by three points. The teams have now split their two games this season and it will be interesting to see what adjustments each team will make before Saturday’s showdown. A concern for Tralee will be the health of Eoin Quigley who picked up an ankle injury last weekend. Éanna will be hoping to carry their fourth quarter momentum into this weekend’s game and Coach Darren McGovern will have to decide how quickly to introduce American Paris Ballinger, who was instrumental in their comeback last weekend. Cup experience may also play a role in this game, with Tralee able to draw on last year’s semi-final experience while Éanna are contesting their first semi-final at this level.

Looking ahead to the game, Warriors’ head coach Pat Price said: “We’re pleased to have reached this stage but realise there’s lots of work to do. That we played Éanna this past Saturday is just a quirk in the fixtures, but I feel like we know Éanna much better than we did last October. They’ve a load of talent and they’ll have our full attention once again.”

Éanna’s Darren McGovern added: “Playing Tralee again is tough for both teams. Coming off a loss though, gives us a lot to work on. We will enjoy the fact the game is in a neutral venue. They did a really good job on us Saturday, so with a few adjustments we will look to play somewhat better. We learned a lot from last weekend, and the lads are always willing to put in the extra work.”
In the second semi final, Griffith College Templeogue will be hoping that they can get by hosts, Coughlan C&S Neptune, to return to the Cup final for the first time since winning the Cup in 2018. Neither team is coming into the game in top form, with Templeogue having lost two of their last three league games, while Neptune have not won a game since the end of November. One of the interesting battles to watch out for this weekend will be the match up between Neptune player/coach Lehmon Colbert and last year’s Player of the Year, Jason Killeen. Both big men have won it all in Irish basketball and have been very dominant over the past five years. Whoever comes out on top of that matchup could have a major influence on which team will head to Tallaght at the end of January.

Looking ahead to the game, Colbert stated: “I'm feeling good coming into the game this weekend. We have been unlucky as a team these last couple of weeks – we’ve dropped a couple of hard games, but overall, the team is in high spirits and ready to go. I think it’s a great thing to be at home, but in the Cup, there’s no such thing as home advantage. They have got a number of guys that can hurt us on any given night.”

Templeogue’s Mark Keenan added: “We know Neptune in their home gym will be a tough task, and we will have to call on all our previous Cup experience this coming Saturday to try get us over the line. We’re all looking forward to the game ahead and having missed out on reaching this stage last season, we are determined to give our very best this weekend. They have multiple scoring threats that we must contain and hopefully keep the home fans quiet also.”
You can find out more information on tickets for the Hula Hoops Cup semi finals 2019/20 here: https://www.basketballireland.ie/news-detail/10058840/ticket-prices-and-schedule-for-hula-hoops-cup-semi-finals/.

All games will be streamed on the Basketball Ireland YouTube channel.