Hula Hoops NICC, U18 and U20 Men's and Women's Draws made 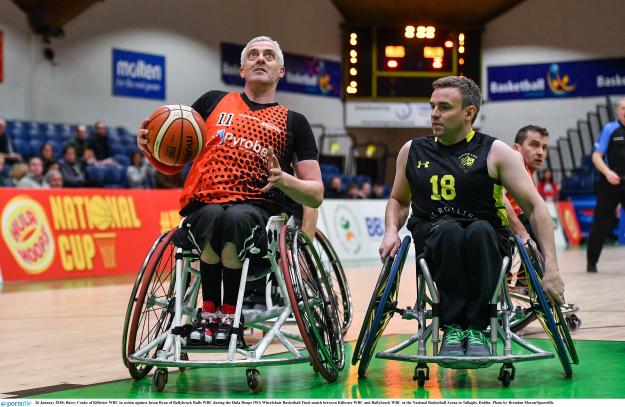 Killester WBC booked their place in the Hula Hoops IWA Wheelchair National Cup Final with a 50-66 victory over Limerick Scorpions. Scorpions started well but the experience and inside presence of Killester carried them to victory.

Limerick Scorpions stormed to an early lead in the first quarter thanks to the offensive prowess of Tiarnan O’Donnell. O’Donnell was a force to be reckoned with as he nailed shots with pinpoint accuracy. For Killester, Patrick Forbes was a presence inside, while Barry Cooke drove for some nice scores, Scorpions leading 17-13 at the end of the first.

Killester had the better second quarter as they managed to deal with Scorpions’ press after scores which allowed Cooke and John Fulham to get through for multiple layups. Scorpions’ Joseph Hargrow controlled the tempo for his side but it was Killester who went into half time in the lead, 27-34.

Killester began to pick up the pace in the second half and played exceptional defence, forcing missed shots from Scorpions and in turn, breaking to the other end of the court for scores. Killester’s Michael Cunningham shone in the third, making crucial shots to build his side’s lead heading into the fourth, 35-51.

Despite Scorpions’ best efforts through scores from Jodie White and O’Donnell, Killester’s defence, paired with their inside offensive scores from Cooke and Pauric Franey, gave them the victory, 50-66.

Rebel Wheelers have booked their place in their second consecutive Hula Hoops IWA Wheelchair National Cup final after a dominant 52-33 victory over Clonaslee WBC. Wheelers got off to a ferocious start and never looked back, behind a twenty six-point performance from Dylan McCarthy.

The first quarter was all Rebel Wheelers as the Cork side played an excellent defensive game, trapping Clonaslee in the backcourt and forcing multiple violations. After forcing multiple turnovers, Wheelers would go on to put on an impressive shooting display, with Dylan McCarthy scoring fourteen points in the first quarter to give his side the lead, 28-0 at the end of the first.

Clonaslee got on the board in the second, with scores coming from Lorcan Madden and Richard Murphy. They also found a way to break Wheelers’ press which led to them heading to the basket more often. Wheelers’ McCarthy continued his fine scoring form as his side led, 40-13, at half time.

In the third, Wheelers used their bench depth to their advantage, whereas Clonaslee had five players and were not able to rest. Clonaslee’s Richard Murphy picked himself up a handful of nice scores as his side went into the final quarter, trailing 48-21.

The fourth saw both sides continue with the same intensity as the previous three quarters. Fast break opportunities arose for Clonaslee, while Wheelers shot the ball consistently to keep their lead and take the win, 52-33.

Speaking after the game, Rebel Wheelers head coach Con Coughlan said, “Coming in we had about twelve or thirteen players and in fairness to Clonaslee, they only had five players but battled from the start to the end.”
Looking ahead to the cup final against Killester, coach Coughlan said, “Killester beat us by three in the league, which isn’t many points, so we’re looking forward to a good game with them.”