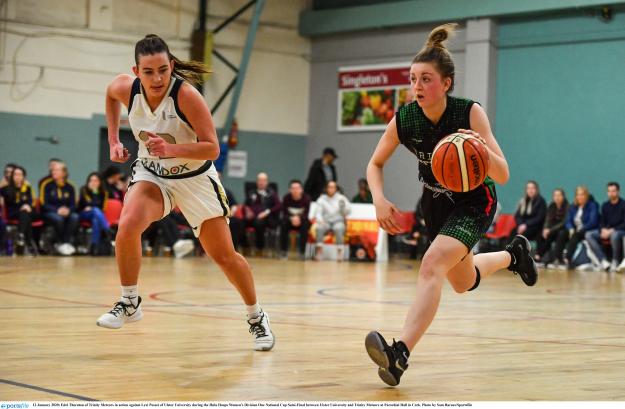 Portlaoise Panthers booked their place in the Hula Hoops Women’s Division One final after a 49-60 victory over Team Tom McCarthy’s St Mary’s. Portlaoise were led by the returning Claire Melia and Trudy Walker who dominated inside and on the boards.

St Mary’s stormed out of the gates early, with scores coming from Loretta Maher and Denise Dunlea. Portlaoise committed multiple turnovers in the opening period, which combined with St Mary’s fine shooting form, gave the Kerry side the lead, 14-4, at the end of the first.

Ciara Byrne with the basket and the foul 4.54 to play Q2 @HulaHoopsIE Women's Division One semi final it's @STMarysBBall70 21 @plaoisepanthers 11 #HulaHoopsCup

Portlaoise started hitting shots in the second and were boosted by the return of Claire Melia who dominated inside. Ciara Wheeler ran the floor for Portlaoise and set up scores as they sought to close the gap. St Mary’s continued to score well and held a 30-22 lead at half time.

Portlaoise’s Trudy Walker and Melia made some big shots in the third as their side took the lead for the first time in the game. Both sides created good scoring opportunities, but it was St Mary’s’ Loretta Maher who took advantage of the shot creations as her side led, 38-37, heading into the final quarter.

Portlaoise’s Melia and Walker shot well in the fourth, while St Mary’s’ Maher continued her fine shooting form as the sides could barely be separated. Portlaoise went on a run late in the fourth, started by a Claire Melia and-one. Soon after their win was cemented by a Sarah Fleming three as Portlaoise were victorious 49-60.

Edel Thornton was the star for Trinity Meteors in Cork this evening as she finished out a stunning performance with a tally of 26 points to see the Dublin side win out 77-63 over Ulster University and book their spot in the Hula Hoops Women’s Division One National Cup final at the National Basketball Arena at the end of the month.

Thornton put in a superb second half performance in particular, and gave a masterclass under the boards as Meteors came from behind to take a big win.

Ulster University got off to the brighter star, with Kollyns Scarbrough and Lexi Posset dominating for the Belfast side. Lauren Grigsby stepped up for Meteors, and she, along with Carolyn Binder and Sarah Kenny worked hard to reduce the deficit as scores rained in from Ulster’s Erin Maguire and Aoife Callaghan. A big Jade Daly buzzer beating three-pointer just at half time saw Meteors reduce the gap even further and they trailed by just four at the break, 37-33.

The third quarter was a hotly contested affair and it was here where Thornton truly began to come into her own. Anything that happened on either end of the floor, Thornton had a hand in, and she made some big plays and key assists to force some big turnovers for Ulster. Aoife Callaghan kept the pressure on for UU though and made some big drives through to keep their scoring ticking over and they led by four going into the last to tee up a thrilling finish. A huge fourth quarter followed and it was Thornton and Grigsby who led the way for Meteors with Thornton fighting tooth and nail under the boards, pulling down some big rebounds to keep momentum with the Dubliners. Ulster were dealt a blow when Briana Mulhern had to leave the court through injury, and with some of their key players in foul trouble, Meteors capitalized from the free throw line and kept the pressure on right until the end, winning out 77-63.

Speaking afterwards, Meteors’ player Eimear Mairtin said: "We knew over Christmas break that we haven't had the game time that we would have hoped for, but we had two really good tough sessions this week and we knew rebounding was going to be a threat from Ulster. We had such a good team defence, that worked really hard as a unit and came up trumps!"

IT Carlow Basketball will face Tradehouse Central Ballincollig in the Hula Hoops Presidents National Cup Final after a victory over Fr Mathews in a hotly contested affair. Mathews led throughout the first half but a strong performance from Carlow in the second, saw that they booked their place in the cup final.

Fr Mathews made the quick start with Jack O’Mahony driving on the first possession for a reverse layup. Carlow then began to catch steam with James Butler and Aaron Whelan picking up scores in quick succession. The first quarter was played at a ferocious pace and was finished with an athletic chase down block from Mathews’ Jarvis Pugh as his side led, 19-24 going into the second.

Carlow’s Duane Harper showcased his handles and finishing ability with a couple of nice scores at the basket, while Pugh displayed fantastic three-point shooting ability, knocking down multiple shots. Jack O’Mahony once again utilised his pace, driving and scoring to see Fr Mathews lead at half time, 40-45.

Both sides came out with the same intensity as the first half. Strong drives to the basket and pinpoint threes were aplenty. Whelan and Harper ran the floor for Carlow while O’Mahony and Pugh created many of Mathews’ chances. Carlow’s Jordan Fallon hit a huge three late in the third to give his side the slimmest margin of advantage heading into the final quarter, 61-60.

In a nail-biting fourth quarter, Carlow were able to stay marginally ahead of Fr Mathews thanks to important shots from Sean Broderick and Butler. In the end, a Kevin Donohoe layup in traffic was enough to seal the victory for Carlow, 89-76.

After the game, IT Carlow head coach Martin Conroy said, “I’m overjoyed to be honest. We started as a small club in Carlow sixteen years ago, with only two teams, so to come and put in a performance like that in a cup semi-final is nothing short of unbelievable to me.”

Tradehouse Central Ballincollig have booked their place in a third straight Hula Hoops President National Cup final as they won out 80-88 over LYIT Donegal in Cork Saturday afternoon.

From the start, it was clear that both teams were well-prepared for each other. A moment of brilliance from Andre Nation finishing the alley-opp dunk helped ignite Ballincollig offence as they tried to find the gaps in Donegal's zone.
The sides were evenly matched in the first with Andre Nation creating some of his classic highlight dunks with the help of Ballincollig teammate Ciaran O’Sullivan. LYIT’s Dom Uhl was a force to be reckoned with early on with his unique mix of grabbing every rebound while also breaking ankles with his ball handling. Uhl had an impressive reverse layup to end the quarter and leave his side within reach of the Cork men, 15-16.

Nation and O’Sullivan combined once again in the second, along with Ronan O’Sullivan who excelled for Ballincollig on the offensive boards. LYIT youngster Killian Gribben impressed, showing wisdom and experience beyond his years to give his side the lead heading into the half, 39-34.

Ballincollig took a firmer grasp on the game in the third, thanks to point guard Inigo Zabola who punished LYIT with his deadly floater on multiple occasions. Ronan O’Sullivan dominated inside and Ciaran O’Sullivan hit some massive threes to extend his side’s lead. LYIT guard Manny Payton dazzled with his handles but it was Ballincollig who led, 56-65, at the end of the third.

Andy McGeever hit some big shots for LYIT when needed but the outside shooting and offensive rebounds from Ballincollig were too much to handle for LYIT in the end, as Ballincollig came away with the victory.

After the game, Tradehouse Central Ballincollig head coach Kieran O’Sullivan said, “It’s great for the club, we’re in the league three years and it’s our third final in a row. Credit to LYIT for coming back after we built a lead but I felt defence won us that game.”