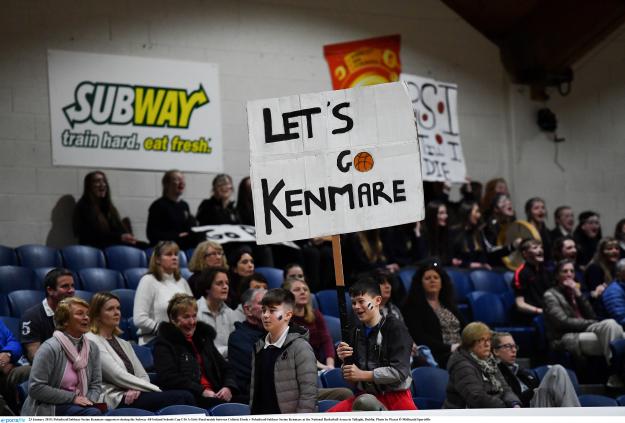 Skibbereen Community School in Co. Cork were crowned Under 16 C Boys All Ireland Schools Cup champions in Tallaght this afternoon, as they put in a dominant display to win out 54-32 over St Joseph’s Secondary School in Rochfortbridge (Westmeath).

The Cork outfit were dominant from early on with Eividas Andreikius and Tom Kavanagh leading the early exchanges to open up an 11-0 lead early on. Good work from Stevie Redmond and Colm Harrington kept the scores coming in for Skibbereen before Noaman Abourezk finally got the ‘Bridge off the mark with a superb three-pointer. Despite a good score from Alexander Ajeigbe as the clock wound down, it was Skibbereen who dominated, finishing out the quarter, 20-5 to the good.

Skib’ kept the pressure up as the second quarter got underway and despite being dealt a blow with the loss of key player, Andreikius, Daniel Buckley dominated under the boards, while Harrington and Redmond continued to chip in with scores. It was in the closing stages of the period before the ‘Bridge began to hit their rhythm, with Michael Akerele and Ajeigbe getting two good scores for the Westmeath side, but Skibbereen still held a big cushion going in at the half, 32-9.

A much-improved third quarter from the Bridge followed, with Ajeigbe the standout for them in the second half, while Evan Cole and Alex Evans began to come into their own at both ends of the floor.  Ajeigbe and Cole knocked down some big scores and as they pushed a press up on Skibbereen, they forced some key turnovers to help reduce the margin, but the Cork side still held the lead 47-22.

The ‘Bridge continued to dazzle in the fourth, and outscored Skibbereen in this quarter, with Ajeigbe in superb form. Kavanagh, Buckley and Redmond were still in hot scoring form for Skibbereen though to keep the pressure off. Foul trouble at both sides of the floor saw some key players check out as the clock wound down, and despite the best efforts of St Joseph’s, it was too little too late, as Skibbereen ran out deserving winners, 54-32.

Under 16 A Boys All Ireland Schools Cup Final

Malahide Community School put in a stunning second half performance to be crowned U16 A Boys All Ireland Schools Cup final champions at the National Basketball Arena in Tallaght this afternoon, winning out 43-30 over St Patrick’s College of Cavan.

Stand out displays from MVP Christian McDonnell, Sean Fitzpatrick and Matthew Poole of Malahide saw them combine for a big 37 points for the Dubliners to see them home to a hard-earned victory.

An extremely close first half saw nothing separating the sides early on. Christian McDonnell and Matthew Poole dominated for Malahide, bagging all of their scoring for the quarter, while good work from St Patrick’s College saw Daniel Oyeleye and Ciaran O’Brien net some good scores early, while a big three from Cillian Moran helped keep the Cavan side neck-in-neck with Malahide, with the Dubliners leading by just one at the end of the first quarter, 8-7.

The second quarter continued in the same vein as every time Malahide managed to get some breathing room on the scoreboard – through scores from McDonnell, Oran Flannery and a great three pointer from Sean Fitzpatrick – St Patrick’s stepped up with a reply every time, with Moran, Oyeleye and Arnoldas Juska getting some big scores to see them trail by just two at half time, 20-18.

Malahide began to take the reins of the game in the third quarter though, and put in a huge defensive display to keep St Patrick’s to just three points in the quarter. At the other end of the floor, they dominated, with McDonnell bagging the opening six points of the quarter, while another big three from Fitzpatrick followed to stretch their lead out. Two well-taken scores from Poole were followed by another big three from Fitzpatrick and despite a well taken score from Oyeleye for St Patrick’s, Malahide had built up a 36-21 point cushion going into the final quarter, outscoring St Patrick’s 16-3 in the period.

St Patrick’s weren’t going down without a fight though, and a superb final quarter from Arnoldas Juska kept the game tense and nervy throughout, as he opened the period with four quick points. Good scoring from Fitzpatrick, McDonnell and Eoin Timmons at the other end managed to keep Malahide out in front, and despite a solid fourth quarter from St Patrick’s, time ran out and Malahide were crowned champions on a final scoreline of 43-30.

Under 16 B Girls All Ireland Schools Cup Final

Abbey Vocational School from Co. Donegal were crowned Under 16 B Girls All Ireland Schools Cup champions in Tallaght this afternoon as they put in a dazzling third quarter display to start them on the road to victory. A MVP performance from Sarah Donovan saw the Donegal school win out 47-26 in the end behind a superb display from the talented young player.

The opening exchanges were extremely close, with Crosshaven edging into an early three-point lead thanks to a huge three-pointer from Alex Fegan and two free throws from Lauren O’Connor. Abbey soon hit their stride though, with Emma Meehan, Sophia Maziuri and Sarah Donovan knocking down some big scores as the clock ticked down to open up an 11-5 at the end of the first.

The second quarter saw nothing between the sides early on, with free throws from Fegan for Crosshaven match by a good bucket from Sarah Donovan at the other end. Some really nice worked scores from Colaiste Muire followed, with Lauren O’Connor leading the charge offensively for the Cork side, and though they outscored Abbey VS in the quarter, they still trailed 16-12 going in at the half.

Abbey Vocational School upped the intensity in quarter three though, and with just three minutes gone in the quarter had opened up a 22-13 lead, thanks to scoring from

Big defensive pressure from the Donegal side kept scores at a premium for Colaiste Muire early on, and despite hard work from O’Connor and Fegan, Abbey continued to push on, driving hard at the basket with Donovan, Ella MxKinney, Amy Carr and Roisin Gillespie all landing big scores to see Abbey into a big 37-18 end of quarter lead. Momentum stayed with the Donegal side in the fourth, and despite the best efforts of Lauren O’Connor and Fegan, Abbey had too much firepower in the end and won out 47-26.

Under 16 A Girls All Ireland Schools Cup Final

There were stars at both ends of the floor with underage international star Tania Salvado of Pobailscoil Inbhear Sceine knocking down a big 22 points in a superb MVP display, and she was supported by a dazzling supporting cast of Amy Harrington and Sarah Taylor to name but a few. Mercy meanwhile were led by fellow underage Irish international star, Sarah Hickey, who finished out with 20 points, while Caitlin Gloeckner and Orla Dullaghan each put in a stunning performance for the Waterford side.

The game was neck-in-neck throughout and from as early as the start of the third quarter, it was obvious that it was going to go right down to the wire.

An extremely close first quarter saw Gloeckner, Hickey and Bethany Power with great scores for Mercy, while Harrington and Salvado dominated at the other end, Salvado picking up some key rebounds to see Kenmare into a 14-11 end of quarter lead. The game remained neck-in-neck throughout the second quarter, as the sides matched each other score for score, and each time it looked as if Pobailscoil Inbhear Sceine had found some breathing space, Gloeckner, Hickey and Orla Dullaghan were on hand to reply for Our Lady of Mercy at the other end. With three minutes to go until half time, Gloeckner finished off a superb drive to put Mercy into the lead, 22-23, and scores from Hickey and Dullaghan followed to see them lead 24-29 at the half.

Again, the third quarter remained a close and nervy affair, with the action end-to-end. Good work early from Harrington and Taylor for Pobailscoil Inbhear Sceine tied the game up, before Gloeckner again managed to weave her way through and edge Mercy back in front. Back-to-back scores from Harrington saw the lead change hands again, before Hickey yet again tied the game up with a super score. A dazzling closing few minutes from Salvado edged Pobailscoil Inbhear Sceine back in front by four, but a timely time out from Waterford saw Hickey, Gloeckner and Dullaghan pull it right back, to leave it tied at 41-41 at the end of the quarter.

The fourth quarter was another shoot out, with Harrington and Salvado leading the charge for Pobailscoil Inbhear Sceine, once more stretching the lead out - this time to six points - by the half way mark. Up stepped Bronagh Higgins for Waterford though and she drained a long three to leave the game on a knife-edge once more. Dullaghan came charging through on the next offense and it was back to a one-point game once more. The sides exchanged scores as the clock ticked down, with Taylor to the fore for Pobailscoil Inbhear Sceine and Hickey leading the way, dishing in a nice pass to Dullaghan to leave just a point in with less than 20 seconds on the clock and it was Hickey who sent the game to overtime, landing one from two free throws at the death to leave the full time score at 49-49.

A fast-paced overtime period followed, with Hickey and Salvado exchanging scores, while Taylor hit two of her free throws for Pobailscoil Inbhear Sceine to see them into a 53-51 point lead with seconds remaining. A free throw from Hickey just wasn’t enough at the clock ticked down, and the Kenmare school somehow managed to hold on in thrilling fashion to win by just one point, 53-52.