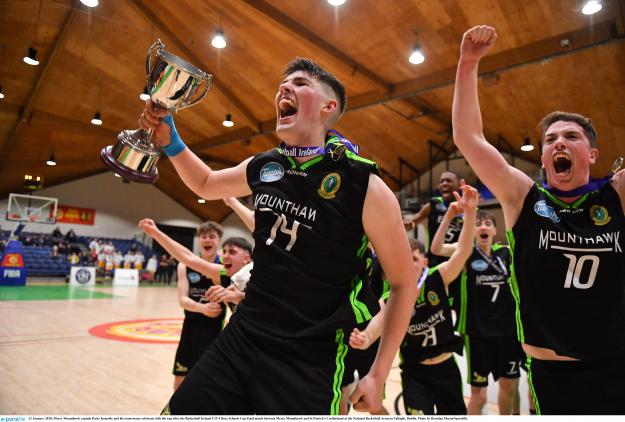 St Flannan’s College, Ennis, put in a stunning second half display performance at the National Basketball Arena in Tallaght this afternoon, to help drive home to a memorable All Ireland U19 C Boys Schools Cup title.

A massive team performance in the third and fourth quarters from the Ennis school was the foundation for victory, as they bounced back strong from a tough second quarter, to outscore Ballymakenny College of Drogheda 18-12 in the third, and a huge defensive display in the fourth quarter saw them hold the Drogheda school to just five points in the period, to win out 43-53 in the end.

There were stars all over the court for the Clare side, including an MVP display from Kevin Nugent, while Aodhan O’Shea, Conor Kelleher and Cian Roughan were all stand out performers for the school throughout the second half.

The first quarter was a close and cagey affair, with Conor Kelleher getting St Flannan’s off the mark early, before a big three from Kingsley Akinbode settled Ballymakenny. Akinbode was to the fore for the Louth school throughout the period, and despite a massive 10-point quarter from Kelleher at the other end, it was Ballymakenny who were edging ahead as the quarter ticked down. A huge three pointer from Nugent though just before the buzzer tied the game up at 17 points apiece.

Ballymakenny had the better second quarter period, as they edged ahead with just over three minutes to go behind big scoring from Tony Bonki Ilonky, Akinbode and Nathan Parris. Good work from St Flannan’s Luke Fitzsimons and a massive three pointer from Colm Kearney though kept the Clare school right in the mix at the death, and they trailed by just three points at the half, 26-23.

The opening five minutes of the third quarter remained nip and tuck, with Parriss and Akinbode bagging some super scores for Ballymakenny – with Akinbode again knocking down two big threes – but St Flannan’s had a reply at every turn, with Aodhan O’Shea and Cian Roughan leading the charge, the latter replying with a big three pointer. Akinbode continued to dominate for Ballymakenny, but as the clock wound down, St Flannan’s picked up their defensive intensity and ran some superb offensive plays to  scores from O’Shea, James Gorman and a big three from Nugent edged St Flannan’s in front, 38-41 going into the last.

The momentum stayed with them in the final quarter, with Kelleher and O’Shea leading the scoring. Despite good work from Bonki Ilonky and Akinbode, Ballymakenny were held to just five points in the quarter, as Kelleher, O’Shea and Nugent dominated the closing minutes to see St Flannan’s home to a memorable 43-53 point victory in the end.

All Ireland Under 16 B Boys Schools Cup Final

Ruairi Cronin dominated the floorboards at the National Basketball Arena in Tallaght this afternoon scoring an absolutely enormous 50 points to see Castletroy College home to an All Ireland U16 B Boys Schools Cup title, as they won out 79-37 over Colaiste Cholmcille.

Cronin was unmatched at both ends of the floor, putting in a huge 21 point first half, despite playing just 12 minutes, and dominating under the boards either end to see his team open up a 25-4 lead from early in the first quarter and they didn’t look back from there, with Ryan Mullane also impressing for the Limerick side.

Despite a very solid performance from Ballyshannon’s Darragh Dolan, Drew Heatley Ryan and Sam McGreal, they just couldn’t get past the size of Cronin inside, as the Limerick school saw scores from Mullane, Jonah O’Rourke and Ciaran Coulter in the half, to lead 44-8 at the half time break.

A much-improved third quarter from Colaiste Cholmcille saw them get some great scores up, with Dolan chipping in five points, three of which came from a well-taken three pointer, while Heatley Ryan was also in good form adding a great basket. Cronin was still in dazzling form though and added a whopping 16 points in the period, two of them from outside the three-point line, and with scores from Mullane and Darragh O’Sullivan adding to their tally, they led 60-15 going into the last.

Colaiste Cholmcille got off to a superb start in the fourth and put in a fantastic 12 points in the opening three minutes with scores from Shane Delahunty, Ryan Keenanghan and a big 14-point quarter from Darragh Dolan. Despite a superb effort from the Donegal school though, the damage had already been done and Castletroy were crowned champions in the end on a final scoreline of 79-37.

All Ireland Under 19 A Boys Schools Cup Final

Mercy Mounthawk were crowned Under 19 A All Ireland Schools Cup champions at the National Basketball Arena this afternoon as they won out 81-64 in an electric all Kerry final against St Patrick’s Secondary School, Castleisland.

A huge first quarter display from the Tralee school was ultimately what secured them victory, as they outscored St Patrick’s 25-10 in the period to open up a cushion that would remain intact for the remainder of the game. Despite a superb following three quarters from St Patrick’s, the damage had already been done and Mounthawk were crowned champions on a final scoreline of 81-64. Steven Bowler put in an MVP performance for the Tralee side, with a 24-point game, but there were leaders all over the floor for Mounthawk, with Daire Kennelly dominating the boards, Tim Pullman Daamen knocking down some key scores and James Fernane also to the fore.

Mounthawk drove into the lead early on, opening up a 9-0 gap by the midway mark of the quarter with Tim Pullman Daamen and Leery Odiahi leading the scoring. A big push from St Patrick’s at the midway point though, saw Gary O’Sullivan hit an opening three-pointer, while free throws from Jack Tobin and Donal Geaney followed. Tobin was on hand to get some key defensive stops at the other end, and they soon paid dividends as he knocked down a big three at the other end. As the quarter wound down though, it was Mounthawk who were in charge at the end of the period, with back-to-back three pointers from Zigi Kalekta and Pullman Daamen to see them lead 25-10 at the end of the period.

Mounthawk asserted their dominance in the opening stages of the second quarter, driving into a 34-12 point lead with three minutes gone, behind superb scoring from Pullman Daamen, Steven Bowler and James Fernane. It was Daire Kennelly under the boards though who was causing huge problems for St Patrick’s and his dominance there helped keep Mounthawk’s big lead intact. A big run of scores from Bowler saw him finish the quarter out with 10 points, while at the other end, it was Aaron Fleming, Geaney and Gearóid Coffey who kept the scoring ticking over and despite a very strong finish to the quarter, Mounthawk were still firmly in control at half time, leading 46-29.

A similarly closely-fought third quarter followed as the sides matched each other almost score for score. Kennelly was again to the fore for Mounthawk, causing havoc under the boards, while the sharpshooting of Kalekta, Pullman Daamen and Bowler saw Mounthawk have the answer each time, as Aaron Fleming went off at the other end for St Patrick’s, netting back-to-back threes as the quarter ticked down. Pullman Daamen replied in kind at the other end though to see Mounthawk win the quarter 22-19 to take a 68-48 point lead into the final quarter.

A massive fourth quarter from St Patrick’s followed though and with Fleming, Gary O’Sullivan and Padraig Fleming leading the charge, they had the deficit back to 13 points with just three minutes to play. With momentum firmly in the hands of the Castleisland school it was Bowler who stepped up for Mounthawk and drained a dagger three to kill off the spark and despite some great work from Coffey and Aaron Fleming as the clock ticked down, it was Mounthawk’s day and they won out 81-64 in the end.

St Joseph’s Secondary School, Ballybunion, secured their first Schools Cup All Ireland title at the Arena in Tallaght this afternoon as they held out under late pressure from St Nathy’s College to win out 37-31.

A standout performance from Millie Byrne for the Kerry school saw her hit a game-high 21 points for her side, with four of these points coming at a key stage in the fourth quarter to help kill off the St Nathy’s comeback. At the other end, Amy Doory was the standout for St Nathy’s, as she put in a big 16 point game and, along with Sarah Brett, caused big trouble for the St Joseph’s defence throughout.

An extremely close first quarter saw scores at a premium at either end. Sarah Bretty led the way for St Nathy’s bagging two well-taken baskets, while a lovely score from Amy Doory kept their account ticking over. They were matched score for score at the other end though, with Millie Byrne to the fore for St Joseph’s and a superb three pointer from Byrne just before the buzzer edged St Joseph’s into an end of quarter lead, 10-6.

With just two minutes gone in the second quarter, St Joseph’s had stretched their lead out to six, with a nice score from

Big defense from St Nathy’s saw them pull a great score back through Sarah Brett but apart from a free throw from Amy Doory, that was to be Nathy’s only score in the quarter, as St Joseph’s took control of proceedings, with scores from Eabha Moloney, Mai Whelan, Katie Dunworth and Byrne seeing them into an 18-9 half time lead.

A close third quarter followed, with Doory putting in a superb display for St Nathy’s to include a massive three pointer and two well-taken two-pointers. Two well-worked scores from Ava Hanley for St Nathy’s kept the St Joseph’s defense on their toes, but good work from Byrne, Whelan and Abigail O’Neill at the other end kept their lead intact, and they headed into the fourth quarter with a 31-20 point cushion.

The final quarter was a much tighter affair, with St Nathy’s throwing everything they had at St Joseph’s to outscore them 11-6 in the quarter. Superb work from Doory was again the main talking point for the Roscommon side, as she chipped in a big six points, while a lovely three-pointer from Hannah Brett and a nice score from Sarah Brett saw them close the game right back to six points with just three minutes to play to ensure a nervy finish. Despite the big effort though, it wasn’t enough in the end, as Byrne continued to dazzle at the other end, and a nice finish from Kate Dunworth sealed the victory for St Joseph’s in the end, 37-31.