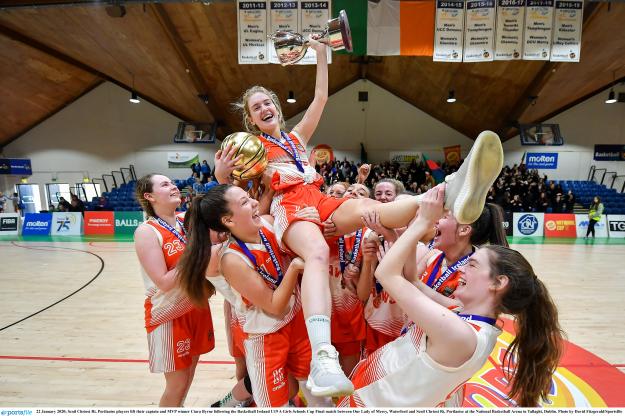 All Ireland U19 A Girls Schools Cup Final

Scoil Chríost Rí put in a dominant team performance at the National Basketball Arena in Tallaght this afternoon to be crowned All Ireland U19 A Girls Cup champions, as they stormed home to a 70-38 point victory over Our Lady of Mercy Waterford.

Ciara Byrne scooped the MVP award for the game, behind a 15-point display from the talented underage star, but there were standout performances from all over the roster for the Laois school, with Shauna Dooley also putting in a 15-point display, Grainne O’Reilly landing key scores, and Jasmine Burke dominating under the boards.

At the other end, Kate and Sarah Hickey were the two main scoring threats for Our Lady of Mercy, combing for 26 points on the day, and great performances from Tara Freeman and Illana Fitzgerald were also one of the talking points. However, it was Scoil Chríost Rí who dominated from the off, opening up a 21-10 point lead at the start of the first quarter and they didn’t look back from there.

A big opening quarter saw Byrne to the fore almost immediately as she knocked down the opening five points for Scoil Chríost Rí, including a big three-pointer to get them off the mark. Scores from Kate Hickey and Fitzgerald and Niamh Corcoran kept Our Lady of Mercy’s scoring ticking over, but as the midway point ticked past, it was Scoil Chríost Rí who were in control, with Shauna Dooley coming off the bench and bagging six consecutive points, while Jasmine Burke closed the quarter strong, to see them into a 21-10 lead.

The second quarter was firmly in favour of Scoil Chríost Rí, with Sarah Fleming, Dooley and Grainne O’Reilly all knocking down big scores for the Portlaoise side. Good work at the other end from the Hickey sisters, including a big three pointer from Kate, was followed up with a closing three pointer from Fitzgerald, but Scoil Chríost Rí still held a solid cushion going in at half time, 35-18.

A closer third quarter followed, as Our Lady of Mercy upped the defensive pressure, trying to close down the multiple scoring threats for Scoil Chríost Rí. Dooley and Byrne came into their own in this quarter though, and were involved in almost every score, while Burke made some nice scores under the boards. It was the Hickey show at the other end meanwhile, with Sarah hitting six points in the quarter, while Kate and Fitzgerald were also on hand to deliver some well-taken three-pointers, but Scoil Chríost Rí were still firmly ahead going into the last, 51-30.

A massive fourth quarter from Scoil Chríost Rí saw them outscore Our Lady of Mercy 19-8, as they dominated at both ends of the floor, with Fleming, Amy Byrne and Dooley all getting in on the action early on. Great work from Faith Umeh and Rachel Glynn off the bench saw them land some great scores. Despite solid work from Freeman and the Hickeys at the other end of the floor, the Portlaoise school just had too much firepower, and won out in style, 70-38, in the end.

All Ireland U19 B Girls Schools Cup Final

St Colmcille’s CS Knocklyon were crowned All Ireland U19 B Girls Schools Cup champions at the National Basketball Arena in Tallaght this afternoon as they put in a superb display to win out 59-40 over St Patrick’s Academy, Dungannon.

Colmcille’s were led by two standout performances from MVP Hannah Byrne, who finished the game out with 26 points, and fellow guard, Emma Mullins who had a big 23 points on the day for her side. A big first half from the Dublin school helped build up a solid lead for Colmcille’s that St Patrick’s struggled to whittle down, as they went in at half time 36-23 to the good, and widened this out to 50-31 by the end of the third.

An extremely close first quarter saw nothing separating the sides early on. Hannah Byrne and Emma Mullins dominated the scoring for St Colmcille’s, with Mullins knocking down a big three pointer and a nice jump shot early on. At the other end, it was Bronagh Barker and Abigail Rafferty who led the charge, with Rafferty bagging seven points in the quarter, while a nice score from Laura Canning helped draw the sides level as the clock wound down towards the end of the period. A free throw from Mullins followed by a big three-pointer from the talented St Colmcille’s player though edged them into the lead just before the buzzer, 17-13.

Momentum stayed with the Dublin school in the second quarter, with Byrne and Mullins controlling the offense. A big quarter from Byrne saw her scoop 11 points for her team to push them out into a bigger lead, and despite good scoring from Rafferty, Canning and Ellen McKiernan at the other end, it was St Colmcille’s who held the lead at half time, 36-23.

It was St Colmcille’s who led the way in the third quarter once more, despite superb work from Rafferty, Barker, Canning and Claire Pinkerton for St Patrick’s Academy. A big defensive display from the Dublin school saw them make St Patrick’s work extremely hard for every score, while Mullins, Abby Steacy and Byrne added some big scores at the other end. Good work from Claire Davitt widened the gap even further and despite McKernan’s and Rafferty’s best efforts for St Patrick’s, Colmcille’s led 50-31 going into the last.

St Patrick’s put in a huge effort in the fourth quarter though, and by the midway point had started to claw back the deficit with super scoring from Rafferty, Bronagh Barker and Pinkerton. It was neck-in-neck throughout, as the sides matched each other score for score, with Mullins and Byrne to the fore for Colmcille’s once more. Despite keeping up with the Dublin school throughout the period, and matching them 9-9 on scoring, the damage had already been done, and Colmcille’s ran out 59-40 point winners in the end.

All Ireland U19 B Boys Schools Cup Final

St Eunan’s College, Letterkenny, drove home to an All Ireland U19 B Boys Schools Cup title in dominant fashion at the National Basketball Arena in Tallaght this afternoon as they won out 78-52 over Waterpark College, Waterford.

Luke Cassidy and Killian Gribben were the standout performers for the Letterkenny school, combining for 47 points between them in a stunning display of basketball. There were stars for Waterpark too, with Colm O’Reilly leading the way for them throughout, James Delahunty working tirelessly under the boards against an extremely in-form Gribben and a great display from Mikolaj Sienicki.

The opening five minutes of the first quarter were close and tense, with good scoring from Waterpark’s Colm O’Reilly and Farouq Rabiu matched score for score at the other end by Killian Gribben and Raumel Soler. As the quarter ticked down, St Eunan’s began to edge out in front, with Luke Cassidy and Gribben getting some big scores, while foul trouble for Waterpark as the quarter ticked down, saw St Eunan’s bag a further five points from the free throw line to lead 18-10 at the end of the first. Gribben continued to dominate for Eunan’s in the second quarter, knocking down to opening baskets early on, while Cassidy followed up with a big three. Waterpark hit a purple patch shortly afterwards though, with O’Reilly driving in two big scores, while Elijah Kelly and O’Reilly knocked down two big three pointers to bring the game back within six points with just over three minutes to go. Again, it was Gribben at the other end who delivered some key scores to push Eunan’s out in front again, and another great score from Cassidy sent them into a 38-26 point half time lead.

An evenly matched third quarter followed, with Gribben and Cassidy again to the fore for St Eunan’s. Max Leadley hit his stride in the quarter, knocking down seven big points for St Eunan’s, while a run of scores from Cassidy kept a comfortable cushion for St Eunan’s. Good work at the other end from Mikolaj Sienicki and James Delahunty kept Waterpark right in the mix though, but despite their best efforts, a big three from Cassidy was followed by a super score from Soler to see St Eunan’s into a 60-44 point lead going into the last.

St Eunan’s dominated the closing quarter, outscoring Waterpark by 10 points in the period, with Leadley, Thomas Reynolds and Cassidy all scoring some big scores for the Letterkenny side. Good work from Sienicki again, Maldrit Bajrami and Delahunty for Waterpark just wasn’t enough, as Eunan’s finished out strong to win 78-52 and be crowned All Ireland champions.