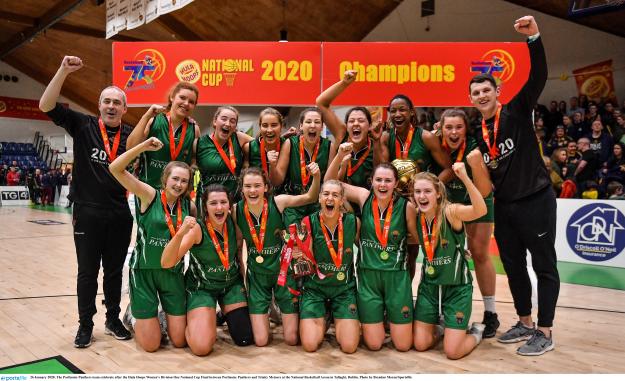 Portlaoise Panthers rounded off a monumental weekend for their club as they claimed their second National Cup title in just three days this afternoon when they stormed home to a 75-71 point win over Trinity Meteors in the Hula Hoops Women’s Division One National Cup final.

The return of Claire Melia at Christmas added an extra element to Portlaoise and it was the inside combination of Melia and MVP Trudy Walker that helped Portlaoise dominate the inside as they outrebounded Meteors by an incredible 41 rebounds. Despite being dominated so dramatically on the boards, Trinity managed to stay in the game to the very end by forcing Portlaoise to turn over the ball consistently through the excellence of Lauren Grigsby in particular. It wasn’t to be Meteors day though and Portlaoise were deserving winners.

The Division One trophy will now head down the M7 where it will join the U18 trophy that Panthers won on Friday evening.

Speaking afterwards, head coach Peter O’Sullivan said: “That was a brilliant performance, a brilliant day and a brilliant weekend! The U18s make up so much of our senior team and it’s great to have the experience of Deirdre Tomlinson, Claire Melia and Trudy Walker to add in. It’s a massive achievement for the club - two National Cups in one weekend - and it’s been building and we are just delighted to get the two wins. We tried to keep calm as we have a lot of young players and this big occasion, it has been tough. We knew they were going to throw everything at us going in at half time, but they shots the lights out. It was cool calm and collected inside with both Trudy and Claire down the stretch. It’s been a brilliant club experience, from the crowds that have been here too.”

The first quarter began with a bang as Ciara Wheeler and Lauren Grigsby traded early scores. Portlaoise didn’t take long to start to exert some early dominance as they started to have success on the inside through Trudy Walker. As the quarter progressed Trudy Walker and Grigsby continued to score for their teams as both sides traded baskets. Portlaoise were playing some excellent defense and had opened a nine-point lead as Melia and Walker found ways to score around the basket. After a Vinny O’Keefe timeout Meteors came back out more composed and finished the quarter strongly as a Lauren Grigsby three pointer left them trailing at the end of one 24-15.

The second quarter followed a similar path as Portlaoise’s inside duo of Melia and Walker were causing huge issues for Meteors. A first half rebounding advantage of 35-16 highlighted the advantage as Melia gathered 14 rebounds to go along with the 10 Walker collected. The dominance on the boards was also telling on the scoreboard as seven different Panthers players scored in the first half with Walker leading the way with 15. Meteors were getting scores from Grigsby, but no other scorer was emerging as Sarah Kenny was limited to three and Edel Thornton five. At the end of a lower scoring quarter Portlaoise had extended their lead to twelve 40-28.

As the second half got started, Meteors roared into the game with Lauren Grigsby continuing her dominant performance offensively. Ten early points for Grigsby dragged her team back into the game but Portlaoise were still answering from the three-point line with Wheeler impressing. Things weren’t going Carolyn Binder’s way for the majority of the first half, but she sprang into action mid-way through the third with back to back steals and fast break layups forced a Portlaoise timeout. Coming out of the break more good work from Binder and a huge Edel Thornton three had the lead back to just three points with five minutes to go in the quarter. Ciara Byrne came up with a big mid-range jump shot to settle Portlaoise but Edel Thornton answered with a beautiful drive to the basket. Meteor’s defensive pressure was causing turnovers and Kate McDaid was doing excellent work restricting Walker inside. Sarah Kenny, who had been quiet offensively, then stepped up with a huge three pointer to draw the teams level with 2.30 to go in the third. Panthers were looking for answers and again Ciara Byrne was there to deliver as she gave Portlaoise a two-point lead. Meteors aggressive pressing was still working though and with a minute to go in the quarter Grigsby forced a turnover and found Thornton for another tying score. Both teams traded free throws in the final minute, but it was Portlaoise who came out of the action with a slender two-point lead 58-56.

Trudy Walker continued her impressive display in the fourth, as she scored six off Portlaoise’s first eight points as they opened back up a lead. Lauren Grigsby was still scoring well but Meteors were forced to call a timeout trailing by seven 66-59. A big Ciara Wheeler three extended the Portlaoise lead to ten but Sarah Kenny was on hand with a big long-range reply to narrow the lead back to seven with five minutes left to play. The Trinity duo of Binder and Grigsby again delivered, and the lead was back to just three as Portlaoise continued to turn the ball over. With two minutes to go in the game Sarah Kenny again stepped up and a huge three drew the teams level on 69 points apiece. Portlaoise responded by going inside to Claire Melia who got to the free throw line and gave her team back a two-point lead. Meteors had good looks at the basket but couldn’t score and it was up to Irish international star Claire Melia to close the game out on the free throw line as Portlaoise won out 75-71.

History has been made at the National Basketball Arena as Tradehouse Central Ballincollig became the first team to win three consecutive President’s Cup titles this afternoon with a superb 73-67 overtime win over IT Carlow Basketball in a thriller.

Despite the fact that Ballincollig came into the game as overwhelming favourites, Carlow did an incredible job of pushing the undefeated league leaders the whole way through to the end. Led by Kevin Donohue, the heavy underdogs managed to fight all the way into overtime before coming out on the losing end by just six points.

If IT Carlow had any nerves coming into their first ever National Cup final, it didn’t show as they raced into an early 10-2 lead with Aaron Whelan and Duane Harper causing Ballincollig huge issues. A Kieran O’Sullivan timeout helped settle Ballincollig’s nerves somewhat as Andre Nation picked up some nice scores to keep the defending champions close early on.  With Kevin Donohue shooting well, Carlow were growing in confidence as each minute of the first quarter passed and an upset was starting to look like a real possibility when the first quarter ended 24-13.

The second quarter started well defensively for Ballincollig as they started forcing turnovers but on the offensive end things still weren’t working smoothly as the ball never seemed to settle in their players hands. After four minutes of the quarter, despite good work from the Leesiders, IT Carlow led by nine points as Ballincollig called another timeout. Offensively Zabola was becoming increasingly influential and Andre Nation continued to pick up scores including an impressive dunk but the champions were still struggling to contain their opponents. Back to back threes from Carlow restored their confidence and an 11-point lead 28-17. Ballincollig were looking increasingly dangerous and a nice finish by Jack Kelly followed by a big three-point play from Nation reduced the deficit to just seven with less than two minutes to go in the half. Colin Murray narrowed the gap even further to just five but a inside score from Harper gave Carlow back their seven-point lead. The perfect half for Carlow was capped off on the buzzer as Jordan Fallon scored his tenth point of the game with a huge three pointer in front of the IT Carlow bench. At halftime the score was 40-31.

As the second half started Ballincollig started to show more of their championship DNA as Zapola helped reduced the lead to just five with two nice fastbreak layups. Scores were increasingly hard to come by and a big three pointer from Ciaran O’Sullivan helped reduce the lead to just two with three minutes to go in the third. As a low scoring ended team fouls were an issue for Ballincollig as Carlow got their lead back to seven points through James Butler. Ciaran O’Sullivan had the final say of a tight quarter with a buzzer beating floater to leave the scores at 49-44.

Hopes of an upset were continuing to grow as James Butler kicked off the fourth quarter with a midrange jump shot. The response from the Champions was immediate though as Ciaran O’Sullivan scored his sixth consecutive point and his cousin Ronan added two to get the lead to just one. Both teams traded scores, but it was Ciaran O’Sullivan again that stepped up to give Ballincollig their first lead at 54-53. Kevin Donohoe continued his incredible display by answering immediately, but O’Sullivan had more instore as he gave Ballincollig the lead again as Carlow called timeout.  A nice score from Duane Harper had Carlow trailing by just one but Andre Nation responded with a big basket and a block. With just over a minute to play Carlow had two good looks at the basket and a shot clock violation while still trailing by just three. Ballincollig didn’t need any additional chances and Ronan O’Sullivan hit a huge mid-range to extend the lead to five points. Carlow called timeout and had one more opportunity to reduce the lead but a stop for Ballincollig looked like it had secured the three in a row for Ballincollig. The drama wasn’t over though as Ballincollig turned the ball over and an Aaron Whelan three reduced the lead to just two with 12.7 seconds remaining. Coming out of the Ballincollig timeout, Carlow were forced to foul, and Ciaran O’Sullivan headed to the line. After missing the two free throws Carlow got one more opportunity and a huge last second basket saw the game go to overtime tied at 62.

STEAL AND THE THREE

Overtime started with a bang as Andre Nation had a huge alley-oop dunk to bring the Ballincollig fans to their feet. The Cork side continued to find scoring more easily and had built a six-point lead before Duane Harper scored a huge three to get it back to a one-point game with 2.27 remaining. With the game in the balance it was Andre Nation yet again who stepped up with a massive three-point lead to give Ballincollig a six-point lead. As the final minute counted down it was Ballincollig’s defense that came out on top as the President’s trophy headed to Cork for the third consecutive year.

NATION STARTS OVERTIME WITH A DUNK

“That was exhausting!” said Ballincollig boss, Kieran O’Sullivan. “Credit to IT Carlow and their coach Martin, they did a great job on us. We showed great resilience, experience and shined through when it mattered. There were clutch plays from Ciaran, Ronan and Andre that took us over the line and we’re absolutely thrilled to get three in a row. Finals are for winning and we got over the line - we have played in three finals and probably under performed in them but still managed to win them all.”