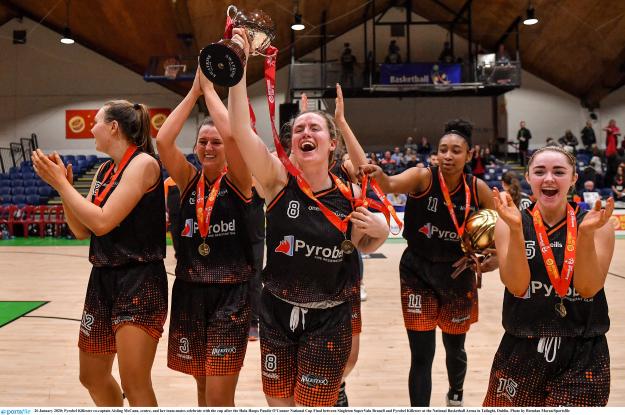 WATCH IT: Live on TG4 or on https://www.tg4.ie/en/player/watch-live/home/

Pyrobel Killester drove home to an extremely memorable 82-59 point victory over Singleton SuperValu Brunell at the National Basketball Arena in Tallaght this evening, to scoop the Hula Hoops Paudie O’Connor National Cup title and end a 15-year drought since their last win.

American pair Adella Randel El and Christa Reed combined for a whopping 43 points in a superb display for the north Dubliners, while co-captain Rebecca Nagle chipped in 12 points from behind the three-point line.

“We've waited for this for a long time,” said Nagle afterwards. “Our last appearance in a final was in 2016 and it's been in the back of our heads ever since. We knew we could do it. Credit to Brunell, they were amazing but I'm so proud of the girls.”

Brunell came into the game as underdogs but also boasting the best three-point accuracy in the Super League. They needed at least a 35% return to be in with a shout and Treyanna Clay held up her end with 4/11 in the first half. Tim O’Halloran’s side had a decent start, with Sinead O’Reilly having an immediate impact on the boards while Laura Morrissey lurked with intent on the perimeter. American Christa Reed - who finished the game with 23 points and the MVP ball – was on hand to deliver early for Killester at the other end, making her first four baskets to keep them in touch. Rebecca Nagle hit a go-ahead triple that ignited Killester’s offence though and a 10-0 run took them all the way to the end of the first quarter to lead, 24-14.

Reed with the steal Nagle with the scoreeeeeee!!!! Time out Brunell with 4.53 to play Q1 @HulaHoopsIE Paudie O’Connor Cup Final it's @SvSingleton 12 @KillesterBball 13 #HulaHoopsCup #20x20

A switch up in the second quarter for Brunell saw talismanic guard, Danielle O’Leary back on the floor. The guard had limped out of her side’s unexpected semi-final win against DCU Mercy with an ankle injury, but somehow was back and ready for action today, and she made her presence felt almost immediately as Brunell started to eat into the deficit. Half of Killester’s first quarter tally was from threes, but their accuracy collapsed to 1/6 in the second period. That opened the door for Brunell and their work rate was paying dividends, with scores raining in and Alex Macheta came off the bench and picked the pocket of Adella Randle El - her layup making it a one score game. The lead changed hands just seconds before the break. Aryn McClure had put in a monster half with a double-double for points and rebounds as well as six assists and two blocks. Killester slipped into foul trouble and it was the American who used the free-throw line to brighten up Brunell’s team talk as the Cork outfit led 38-37 going in at the half.

There was a sense that Killester had an extra gear though and as the third quarter got underway, it certainly ramped up a notched.  They retook the lead early in the third quarter, with Aisling McCann showing superb awareness in transition while Adella Randle El drove through and racked up nine points in the period.  Brunell missed an open three from the top of the key and the punishment was severe – Reed went down the other end for an easy layup before Randle El forged a double-digit lead. Ella McCloskey got busy on the offensive boards and made her free throws, while sharpshooter Michelle Clarke made her steal count with the layup and with Brunell visibly tiring, Killester’s tough defence began to win out and they led 60-44 going into the last.

Reed with the deep two

An 8-0 run got Brunell’s bodhráns beating early in the fourth quarter as Clay opened with a layup before Morrissey and Greta Tamasanskaite knocked down three-pointers. The volume of the Cork faithful was back at its customary levels, before Nagle prompted a storm of orange with seven minutes left. Her corner three snapped Brunell’s run and gave Killester the confidence to see out the game and they did so in style, 82-59, with Nagle adding: “we'll definitely celebrate this one!”

Head coach Karl Kilbride added: “We said before the game that defence was going to be the difference between winning and losing. We really knuckled down in the third quarter. We held them to six points and when we get stops it lets us get out and run and shoot threes in transition. It's very hard to describe how I feel at the moment.”

Griffith College Templeogue are Hula Hoops Pat Duffy National Cup champions for the third time in five years after they saw off the challenge of Dublin neighbours, DBS Éanna to win out by 10 points, 78-68, at the National Basketball Arena in Tallaght.

Lorcan Murphy was in stunning form for Mark Keenan’s side, finishing the game out with 33 points in a superb MVP performance. Templeogue had heroes all over the floor when it was needed though as with just over a minute to go on the clock in the fourth quarter, the combination of Éanna’s Josh Wilson, Neil Lynch and Daniel Heaney brought the game back to just two points and the sold out crowd were on the edge of their seats. Up stepped experience though, and Templeogue delivered, with Neil Randolph draining a huge three pointer before Jason Killeen hit a massive two from deep to build the cushion once more and, from there, they drove home to victory in style.

“It’s unbelievable!” said head coach Mark Keenan afterwards. “It was tense but it was sweet. They really came back at us hard and we looked a bit comfortable at a stage, but they really put it up to us. The guys showed a lot of metal in the last two minutes, when it got back to two points. Lorcan was unreal, Jason Killeen made big shots, Darren Townes made his free throw and I’m just thrilled for the lads. It’s brilliant for the lads and the club. Fair play to both teams but our experience probably stood to us in the end.”

The first half was truly the Lorcan Murphy show, as the talented Templeogue player went in at half time with a whopping 28 points to his name. Templeogue led the way from early in the first, with Darren Townes, Jason Killeen and Murphy all bagging early scores. Mark Reynolds was the standout scorer for Éanna at the other end, hit the first six of their opening points, but another Killeen jump shot and a superb steal and score from Townes sent Templeogue into a 8-15 early lead. Brilliant work from Éanna’s Joshua Wilson saw the gap narrowed as he drove home a great lay up, and this was followed up by a well-taken score from Neil Lynch to close the gap back to two points. Murphy stole the show as the quarter ticked down, knocking down another six points, and despite scores from Stefan Zecevic and Reynolds once more, Éanna trailed 19-24 at the end of the first.

Murphy continued his explosive form as the second quarter got underway as, after a Killeen jump shot got Templeogue straight off the mark, Murphy added the next eight points to round of a 10-0 run for Mark Keenan’s charges. Reynolds broke the deadlock with another well-worked scores, and added another moments later. Éanna built on this momentum, and added to the run, with Wilson and Zecevic knocking down big scores to close the gap right back. Again it was Murphy who was on hand to stem the tide, running home a quick four points, while a massive Neil Randolph three pointer followed. Neil Lynch replied in kind at the other end just before the half, but it was Templeogue who still held the lead 31-44.

Reynolds opened the scoring in the third quarter for Éanna but Stephen James drained a three at the other end, and a big Killeen jump shot put yet more space between the teams, opening up a 33-51 point lead. Lynch was on hand to deliver for Éanna again at the other end, knocking down fantastic back-to-back threes either side of a Townes’ dunk. Wilson was also to the fore for Éanna as they tried to claw their way back in to the game, and he followed up with two super drives, before Zecevic knocked down a massive three pointer to have the Éanna crowd on their feet, and bring the game back to a nine-point battle. Heaney was on hand to drive them forward even more, scoring a big three points, but Puff Summers stepped up for Templeogue, hitting a super fade away jump shot and delivering an absolutely dagger blow just before the buzzer with a three-pointer from deep to see Templeogue into a 54-63 point lead going into the last.

Reynolds again with the midrange

Scores were at a premium in the early stages of the fourth quarter, before Zecevic and Marko Tomic hit two nice scores for Éanna. Free throws at the other end kept Templeogue’s account ticking over and with just over three minutes to play, they looked comfortable leading 58-69. Éanna were not done yet though, and a big Lynch score, followed by a great Wilson basket and bonus score edged them closer. A huge score from Heaney, followed by a free throw suddenly had the game on a knife edge with just over a minute to play, Éanna now trailing by just two points, 67-69. Randolph and Killeen stepped up to the challenge in style though, with Neil landing a huge three moments later before Killeen followed up with a deep two and from there, they pushed on to win by 10 in the end.