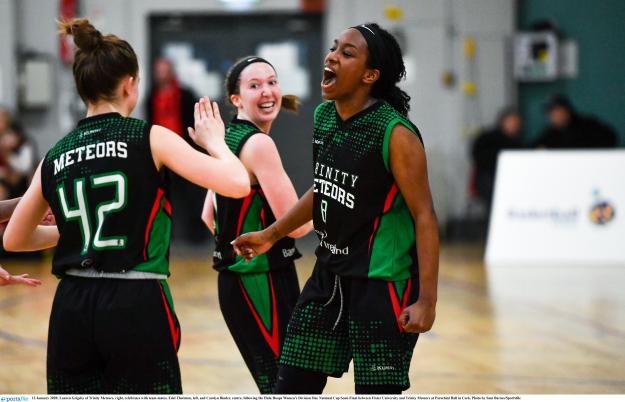 This Sunday’s Women’s Division One National Cup final is set to be a thriller as Portlaoise Panthers go head-to-head with Trinity Meteors at 1.30pm in a hugely-anticipated showdown.

Panthers come into the game off the back of a big week of games, with many of their underage stars crowned All Ireland U19 A Schools Cup champions with Scoil Chriost Ri, Portlaoise, on Wednesday afternoon, before going on to win out the Hula Hoops U18 Women’s National Cup final on Friday evening in a dominant display over Waterford Wildcats. Now, many of these young stars will turn their attention to their third game of the week, and with Trinity Meteors standing in their way of a perfect three-from-three, this could go right down to the wire.

Portlaoise ground out a tough win over Team Tom McCarthy’s St Mary’s in the semi-final showdown in Cork just two weekends’ ago, with Trudy Walker and Sarah Fleming leading the scoring charge, and they’ll be looking for big performances from across the squad if they are to get past a tough Trinity outfit on Sunday. Some of the young stars to watch out for include Fleming, Shauna Dooley, Ciara Byrne, Gillian Wheeler and Hannah Collins. Add in the standout talent of Claire Melia who has returned to the squad, along with the experience of Deirdre Tomlinson, and Portlaoise are a tough match up for anyone.

Over on Meteors’ side meanwhile, they dazzled in the fourth quarter in their semi final bout with Ulster University, with Edel Thornton leading the charge on that occasion. Thornton wasn’t just a standout on the offensive side of things – where she top scored for the game with 26 points - but she also put in a phenomenal performance on rebounds too, and was certainly the X factor on the day for Vinny O’Keeffe’s charges. Meteors also have valuable Cup final experience behind them, and will be hoping that this Sunday will see them right the wrongs of the 2018 final, which saw them lose out in the fourth quarter to Fr Mathews. They have a host of threats around the court which make this game all the more interesting, with Lauren Grigsby and Kate McDaid key players for them in the semi-finals and throughout their league campaign, while Sarah Kenny has really come into her own this season and is working a lot of magic under the boards for the Dubliners. They too have enviable depth, with Niamh Kenny, Jade Daly, Carolyn Binder, Katie Kilbride and Eimear Máirtín just some of the experienced talent they can call upon on the day, and with their backs firmly against the wall in Parochial Hall two weeks’ ago, Meteors certainly stood up and showed what they are capable of.

This game is certainly one not to be missed, and tips off at 1.30pm at the National Basketball Arena in Tallaght.