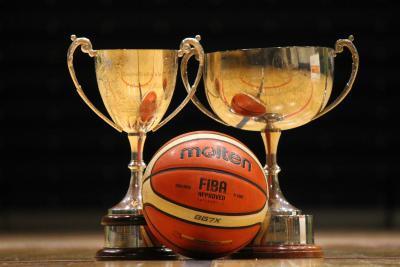 An action-packed weekend at the National Basketball Arena in Tallaght drew to a close on Sunday afternoon as the men's and women's NICC National Cup champions were officially crowned.

In the men's final, UCD Marian took the spoils as they won out well over BC Leixlip Zalgiris in a hotly-contested clash. Zalgiris had had the better of their league meeting earlier in the season - taking home a 30-point win on that occasion - and Marian were determined not to let that happen again this time around.

Zalgiris who started the brightest of the two teams with Aurimas Statkus leading the way for his team in the first quarter with 11 points including two big three-pointers to show UCD Marian that the big man was more than just a threat inside the key. UCD moved the ball well, but struggled with their finishing missing a lot of open shots to go down 16-21 at the end of the first quarter.

In the second, UCD Marian hit a big purple patch, clicking offensively and working impressively on defense to limit Zalgiris' scoring. UCD’s Conor Meany led the way for the Dublin side with several assists, seven points and intense pressure on defense.  Dan Nelms of UCD started to get the better of Statkus inside contributing ten points for UCD but Nelms could not stop Statkus on the other end of the floor with the Zalgiris' talisman contributing another eight points to his tally. UCD started to pull away going into the half though, leading 41-34 at the break.

The third quarter saw UCD Marian continue their dominance with Zalgiris beginning to tire. Patrick Nolan was the main focal point on offence for UCD in the third leading UCD’s scoring with ten points. Zalgiris struggled to get going on the offensive end, finishing the third with 12 points in the period. Captain Kestutis Damulevicius hit two big three pointers to keep Zalgiris within striking distance but they had a lot to do going into the fourth quarter trailing 60-48.

The final quarter was much the same as the third, as UCD controlled the game with periodical rises from Zalgiris crushed by UCD’s Conor Meany and Patrick Nolan. Zalgiris again could only manage twelve points in this quarter with the effect of numerous games over the two-day period showing. UCD’s fitness, ball movement and control down the stretch just proved too much for Zalgiris as they came out 79-58 winners.

And that’s a wrap! Massive congrats to today’s NICC National Cup champions, @EastCavanEagles & @UCDMarian Eagles were crowned women’s champs with a 55-46 win over Tolka Rovers in the final, while Marian claimed the men’s title with a 79-58 win over Leixlip Zalgiris pic.twitter.com/siXSNM9x0q

In the women's final it was a physical slugfest between Tolka Rovers and East Cavan Eagles which went right down to the wire with Eagles finally taking the crown in thrilling fashion. A frantic opening quarter saw both teams scoring in transition, with Elaine Kenny of Rovers leading the way for her team with four points and Casey Mulvey using her strength to score eight. Eagles took a narrow one-point lead going into the second, 14-15.

The second quarter started where the first began with nothing between the two sides throughout. Tolka again were lead by Elaine Kenny who contributed another three points along with Naoise Doran who also added three.  Eagles shared the ball well which was reflected by them having five different scorers in the second with a big three pointer and Eagles took a three-point advantage going in at half time, 26-29.

Tolka were not going to let this game go without a fight and came out to start the third all guns blazing with two three pointers from Aoife Darling and another from Denise Callaghan making Eagles nervous. However, the Cavan side kept the game close, Chloe McElhinney producing five straight points to start the quarter before another five-point run from teammate Ciara Tolan sent the teams into the fourth all square at 41-41.

The last quarter started with both teams struggling to score with fantastic defensive pressure on both sides of the floor. Once again Elaine Kenny lead the way for Tolka with some lovely assists by Aoife Darling. However it was Eagles who took a hold of the game in the fourth, a big three by Ciara Tolan, four points from captain Chloe McElhinney and huge offensive and defensive rebounds from Casey Mulvey meant that the NICC Women's trophy would be leaving the capital for Cavan as Eagles won out on a final score line of 46-55.

A big thank you to all officials, players, coaches and supporters for a fantastic weekend of Cup action.