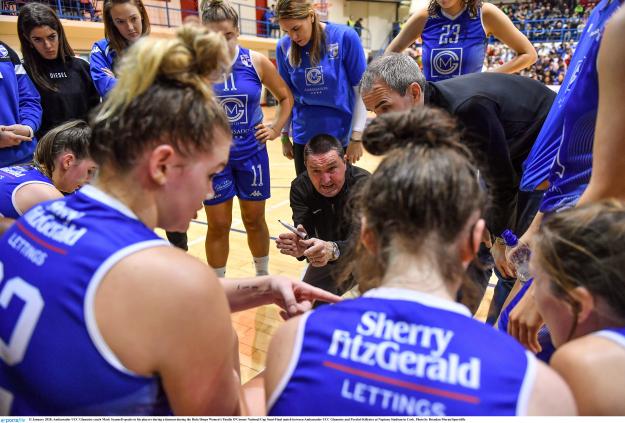 With the Hula Hoops National Cup Finals seemingly a distant memory, the focus turns once more to league action as a number of key fixtures jump out ahead of this weekend’s basketball.

DCU Mercy look to keep their six-point advantage at the top of the table intact when they host Fr. Mathews on Sunday. The visitors make the trip on the back of a very impressive display against Ambassador UCC Glanmire, and will need to maintain this standard if they are to take anything from Dublin this weekend.

Leixlip Amenities Liffey Celtics make the journey to Cork to face a tough Ambassador UCC Glanmire side on Sunday afternoon. Glanmire looked poised to challenge for the top spot had they not fallen to local rivals Fr Mathews last week, but Mark Scannell will be just as keen to keep the pressure on the leaders regardless with another home victory.

Elsewhere in the Women’s Super League, Pyrobel Killester will endeavor to keep the momentum from their recent cup celebrations going. The black and orange outfit travel to a struggling IT Carlow on Saturday afternoon, while second-place Maree prepares to host mid-table Maxol WIT Wildcats. Elsewhere, Marble City Hawks face off against Singleton Supervalu Brunell.

With things really heating up in what is turning out to be an incredible Men’s Super League campaign, Belfast Star could equal the points total of Garvey’s Tralee Warriors at the top, if only for a short while, when they play host to Keane’s Supervalu Killorglin.

Warriors tip off on home ground half an hour after Star, facing opposition with a similar record in Pyrobel Killester. Pat Price’s team ground out an important one-point win away to Griffith College Templeogue last week, with Paul Dick and Ivan Bogdanovic combining for 35 in the contest.

It has proven to be an unpredictable campaign thus far however, and Hula Hoops National Cup champions Templeogue will be well aware as they match up with Coughlan CandS Neptune in Cork. The two teams both lie six points behind Tralee, so a loss for either team in this pivotal encounter would make a late surge for the title unlikely if anything.

UCD Marian can keep their fight for the title going when they make the short journey to play DCU Saints, while DBS Éanna will still feel they are very much in the mix as they face Maree in Galway this Saturday. Elsewhere, Abbey Seals Dublin Lions host  Moycullen, Belfast Star welcome Keanes Supervalu Killorglin.

In the Men’s Division One, things look a little more straight-forward at the top of the table. With Fr Mathews dropping more points away to IT Carlow last weekend, Tradehouse Central Ballincollig, who remain without defeat thus far, can afford to lose three of their remaining six and still finish in pole position.

If that first loss is to come for Kieran O’Sullivan’s side, it could likely be on the cards this weekend. They reenact what was an enthralling Hula Hoops Presidents Cup Final by matching up against IT Carlow once again at midday on Saturday. A game that went to overtime, Martin Conroy’s charges are one of few outfits that have made life difficult for a seemingly flawless side to date.

LYIT Donegal played out a double-overtime thriller, in which Manny Payton posted 42 points in a winning effort. His ability to put up such numbers will undoubtedly be matched by the hot shooting of Limerick Celtics’ Kevin Oberweiser when the two go head-to-head in Donegal on Saturday afternoon.

In the Women’s Division One, Team Tom McCarthy’s St Mary’s look to keep their lead at the top of the Southern Conference with back-to-back games, hosting UL Huskies Friday before setting sail to face Mystics in NUIG the day after. Should the Kerry outfit go two-for-two, they’d remain firm favorites to see out the season as conference champions.

Trinity Meteors could also close the gap at the top of the Northern Conference, the Dublin side three points behind Ulster University with a game in hand, as they match up with third place Swords Thunder.