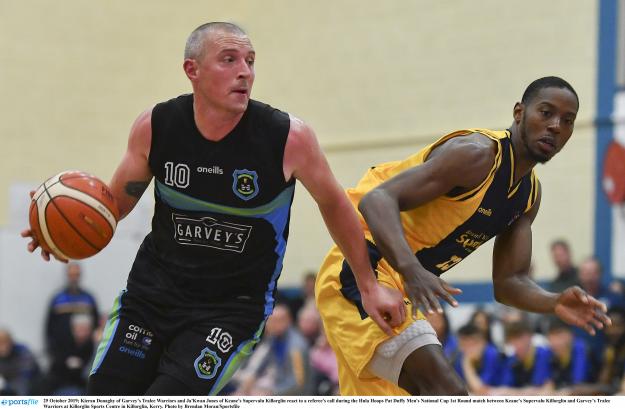 Garvey’s Tralee Warriors could take another big step towards securing the top spot in the Men’s Super League this weekend, while another stiff challenge for DCU Mercy in the Women’s Super League could be the only thing stopping them finishing above the rest.

While Tralee will very much be focused on the job at hand this weekend, they will be looking for UCD Marian to do them a favour, as the third-placed side host Belfast Star, who lie one win behind the Kerry outfit at the top of the Men’s Super League.

Having lost out in the local derby against rivals DCU Saints last weekend by a score-line of 83-72 after overtime, UCD will certainly come in with a point to prove. However, it seems as though all the momentum will be will the visitors, having seen off Keane’s Supervalu Killorglin in a thrilling 77-69 win. Delaney Blaylock was outstanding, most notably slamming down a thunderous put-back dunk that is still doing the rounds on social media. Although it was guard Aidan Quinn that caused Colin O’Reilly’s team the most problems on the day, notching 24 points in a composed effort from the Belfast stalwart.

“Aidan was terrific, he really had the hot hand for us tonight and particularly in the first half,” coach Adrian Fulton said of his trusted guard.

“Obviously, the league is very much in Tralee's hands now, but we just have to hang in there as best we can."

Tralee were equally impressive in their 82-64 win at home to Pyrobel Killester last weekend.

In the second half things began to click for the Warriors with multiple players getting on the score sheet, scoring was led by Ivan Bogdanovic and Daniel Jokubaitis. Killester struggled to match the scoring as Warriors ran out winners.

“The business part was keeping focused even though we hadn’t pulled away, but we were confident that we would wear them out,” coach Pat Price noted after the final whistle.

A vastly experienced coach, he knows that his team can’t afford to let their standards drop as they travel to Moycullen on Saturday evening.

Griffith College Templeogue will still feel they have an outside chance at landing the league-cup double. Having won by fifteen points in Cork last weekend, they host Maree on Saturday evening.

Maree have improved this season, but it was still a shock when they kept Hula Hoops National Cup finalists DBS Eanna at bay last weekend. Eanna will look to regain momentum as they host DCU Saints as they try to sneak their way into a top four finish.

Pyrobel Killester will play host to Coughlan CandS Neptune on Saturday, while Abbey Seals Dublin Lions could build on their first win of the campaign when they travel to Keane’s Supervalu Killorglin.

In the Women’s Super League it really is DCU Mercy’s title to lose at this stage. Pyrobel Killester won’t have far to travel to play the league leaders, and after a comprehensive win away to IT Carlow last weekend, the black and orange outfit will feel confident that an upset could be on the cards.

Karl Kilbride was full of praise for his team after last week’s win: “We played very well offensively, shot the ball well and had 15 threes. Defensively we weren’t where we needed to be in the first quarter, but we did a much better job in the second quarter and helped build ourselves a lead.

“We’re happy with the win and look forward to the challenge against DCU next week.”

DCU Mercy were equally impressive as they disposed of an in form Fr Mathews team by a scoreline of 96-71.

The game was as good as done at the interval, a 23-point advantage good enough to see Mark Ingle’s team cruise to another victory.

Meredith Burkhall was in her usual fantastic form, notching 34 for a solid afternoon’s work.

Maree have the best chance of putting the pressure on Ingle’s charges, as they lie two wins behind DCU ahead of the weekend’s action. Fr Mathews will be hoping to give a much better account of themselves when they host the Galway team this Saturday evening.

Ambassador UCC Glanmire will be in with a shout of securing their top four position when they host Marble City Hawks, while another Cork side Singleton’s Supervalu Brunell, will be looking move up the table when they visit IT Carlow.

Maxol WIT Wildcats could make an outside charge for a top four finish when they host Leixlip Amenities Liffey Celtics at the weekend.

In the Men’s Division One, Tradehouse Central Ballincollig hold all the cards at the top of the division, with Kieran O’Sullivan’s side looking to extend their unbeaten run when they visit McGowan’s Tolka Rovers this Sunday afternoon.

In a rematch of the Hula Hoops Presidents Cup final last weekend, Ballincollig were lucky to get out of Carlow unscathed when Ronan O’Sullivan’s shot at the death gave his team a one-point victory.

Jordan Fallon was superb for Carlow, finishing with 30 points, but Ciaran O’Sullivan and Andre Nation were at their typical best to keep Ballincollig in contention before Ronan put the finishing touches on the performance for the black and red outfit.

In matching up against Tolka Rovers, the Cork side will come up against last year’s cup finalists, and they will be hoping for a similarly positive result.

The chasing pack will know top spot is as good as out of reach, but second place would grant a team a promotion playoff at the season’s end.

Scott’s Lakers St Paul’s Killarney have the league’s second best record, but that will be in jeopardy when they take on both EJ Sligo All-Stars and LYIT Donegal in a gruelling back-to-back this weekend.

Brian O’Neill will be integral, knocking down six threes in the win against Ulster University Elks last weekend, but an equally accurate shooter will be waiting in the form of Andy McGeever, making for an exciting encounter all around.

Fr Mathews are one win behind their rivals from the neighbouring county, and a win against bottom side Waterford Vikings would keep the pressure on in the race for second place. Having lost a few matches on the bounce, last week’s victory at home to Ulster University Elks will serve as a welcome confidence boost with the season drawing to a close.

Limerick Celtics aren’t far off a top four spot, and two wins against Portlaoise Panthers and Waterford Vikings this weekend could see them level with LYIT Donegal should other results go their way.

IT Carlow are still in the mix for a decent finish, Martin Conroy’s charges welcoming Limerick Sports Eagles in a game that could see Carlow leap-frog their opponents into fifth spot.

In the Women’s Division One, Trinity Meteors and Team Tom McCarthy’s St Mary’s will look to maintain their respective top seeds in the Northern and Southern Conference.

St Mary’s will travel to Belfast to face Phoenix Rockets as the cross-conference fixtures continue. Rockets have struggled thus far in their campaign, and St Mary’s will take confidence from their comfortable win in Castleisland last weekend against UL Huskies.

In the Northern Conference, it’s one versus two, Meteors also making their trip to Belfast to face off against Ulster University Elks. Having had last weekend off, Elks will be looking to return to the form that has seen them only drop two games this season.

Griffith College Templeogue and Limerick Celtics will lock horns in the capital, while Tipperary Knights will look to move up the Southern Conference when UL Huskies make the short journey to the Premier County.

Portlaoise Panthers play host to NUIG Mysitcs in an attempt to keep the pressure on St Mary’s at the top of the table, and with a lot of basketball yet to be played, there are plenty more stories to be written in both conferences.