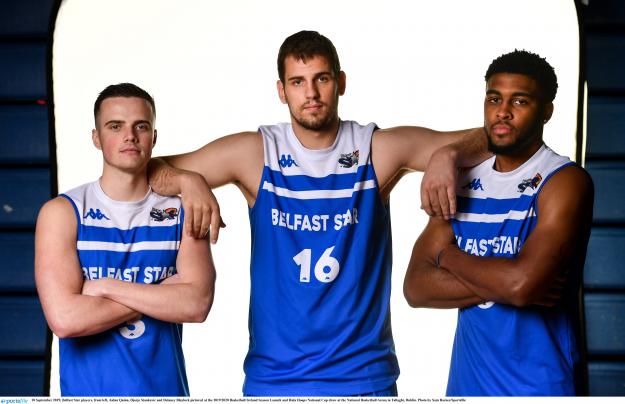 While the Super League seasons draw nearer to the home stretch, a number of marquee matchups take centre-stage in this weekend’s games.

Belfast Star will look to grasp their eighth consecutive win when they play host to Hula Hoops National Cup finalists, DBS Éanna. Star will hope that the outstanding form of Delaney Blaylock will roll over into this contest, notching an astronomical 50-points in last week’s encounter with UCD Marian. However, Éanna will look to overcome the scoring power of Coach Adrian Fulton’s side wit hot-hand, Stefan Zecevic, who posted 20 points in their match with DCU Saints at the weekend.

Elsewhere in the Men’s Super League, Keane’s Supervalu Killorglin make the short journey to the Tralee Sports Complex to face Garvey’s Tralee Warriors. Killorglin handled their business against a struggling Abbey Seals Dublin Lions outfit at the weekend, with Rami Gahanem’s 26-points allowing the Kerry side to cruise to a 12-point victory. They’ll need a perfect performance to stand a chance against a red-hot Warriors side who dispatched of Moycullen last week by a substantial 18-points, having four different men in double-digit scoring.

Cup Champions Griffith College Templeogue will do battle with DCU Saints this Saturday also. Saints have had a fluctuating run of form, losing by 28-points to Éanna on Saturday after gliding past a strong UCD Marian crowd a week previous. Templeogue will hope that their run of form will continue, with usual suspects Lorcan Murphy (31), Neil Randolph (18) and Jason Killeen (16) leading the scoring in their victory over Maree last time out.

UCD Marian journey south to face bottom-side, Abbey Seals Dublin Lions at 17:30 this Saturday. Both camps will be looking to bounce back from the weekend, following defeats at the hands of Belfast Star and Killorglin respectively. James Gormley’s performance in the last game will offer hope to this Lions squad, dropping 22-points in that defeat.

Coughlan CandS Neptune will welcome Moycullen to their stadium Saturday evening in Cork. Moycullen will look to call a halt to their recent slide, dropping the last four games in a row. Neptune were unfortunate in their loss against Killester, seeing five different players post 15-points or more on the night. Player-coach Lehmon Colbert will hope for more of the same this weekend with both sides determined for a victory.

Galway side, Maree, will face up against the team a spot above them on the Super League ladder, Pyrobel Killester, when they take to Calasanctius College in the late game Saturday evening. Killester will hope the scoring of Kason Harrell (26) and Tomas Fernandez (26) will carry over into this mid-table matchup. Maree will look to put their last game behind them, with the match being essentially over as a contest before halftime against Templeogue.

In the Women’s Super League, Maree play host to Pyrobel Killester in what promises to be a close encounter. Killester could do the table-topping DCU Mercy a favour, by keeping the gap at six-points before they tip-off a day later. Maree will hope the form of Claire Rockall and Carly McClendon will shine through, in a win that would maintain their hounding pressure on DCU Mercy.

The league leaders make the typically testing journey to Cork’s Parochial Hall to face Singleton Supervalu Brunell in the only Sunday Super League game of the weekend. DCU took care of business last time out, largely thanks to the serial scoring of Meredith Burkhall (31) and Ashley Russell (28). Brunell’s Treyanna Clay will look to help break the winning run of DCU Mercy, with her scoring (29) carrying the Nellies over IT Carlow in the last game.

Ambassador UCC Glanmire set sail for Waterford where they’ll come up against mid-table Maxol WIT Wildcats. Glanmire rolled over the struggling Marble City Hawks with a scoreline of 82-39 in their last fixture. Top scorer, Shrita Parker (29) will be desperate to make an impact in an away game that could cause problems for the Cork side. Wildcats will hope to defend home-turf after losing at the hands of Liffey Celtics a week previous, Maria Palarino (17) was the top-scorer for the Waterford outfit during the defeat.

Marble City Hawks will be desperate to clinch their first victory on the year when they play IT Carlow at home. This matchup sees the two bottom teams face off in what could potentially be a relegation decider. A win for Hawks would see them leapfrog Carlow in the table, putting them level on points, with Hawks having the edge on points difference. A win for Carlow, spurred on by leading scorer, Kaitlyn Slagus, could be what they need to solidify them in next year’s Super League campaign.

In the Men's Division One, Tradehouse Central Ballincollig once again look to strengthen their position at the top of the table, the Cork side playing host to EJ Sligo All-Stars. Sligo will travel in an attempt to hand Kieran O'Sullivan's charges their first loss of the season and bring some of the trailing pack back into contention. They will take confidence in the outcome of the reverse of this fixture, Ballincollig scraping a two-point victory on their travels in November.
Scotts Lakers St Paul's Killarney could get a firm grip on a second-place finish should they win at home to Fr Mathews, another Cork side sitting one win behind their neighbours. After a run of poor results in the new year, Mathews will look to feed on their momentum gained from a two-game win streak.
Having dropped more points last weekend, LYIT Donegal open the door for a number of teams to snatch the fourth place spot from them come the season's end. Niall McDermott's team will be determined to not let this happen when they make the trip to Portlaoise where Panthers await.
Limerick Celtics are one win better off than Donegal, and they can keep the teams higher up on their toes should they defeat McGowans Tolka Rovers at home.
IT Carlow and Limerick Sports Eagles will feel they are very much in the hunt for a playoff spot as they face Waterford Vikings and Ulster University Elks respectively.

Team Tom McCarthy's St Marys could edge closer to securing a top spot in the Southern Conference in the Women's Division One, the Castleisland side facing Griffith College Templeogue on the road this weekend. Portlaoise Panthers will look to keep the pressure on their opponents at the top of the conference when they play NUIG Mystics in Galway. Mystics struggled against St Marys last weekend, so Panthers will be full of confidence when they make the journey west.
Elsewhere, UL Huskies seek to finish their campaign on a high by defeating Swords Thunder, both teams struggling in their respective conferences, while Phoenix Rockets and Tipperary Knights lock horns in Belfast.