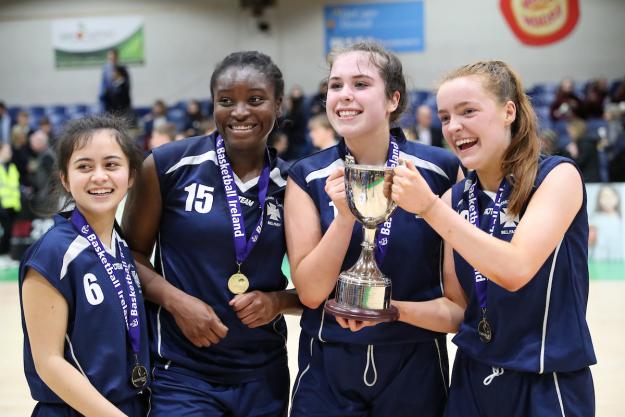 This was a hotly anticipated game with Scoil Phobail Sliabh Luachra coming into the game in good form facing off with a St Malachy’s team that has CJ Fulton, one of the most exciting talents at this age group.

A tight first quarter saw both teams struggle to make shots and second chance attempts were few and far between. David Gleeson and Ronan Collins were the standouts for the Rathmore side while it was Conor Ryan and CJ Fulton that kept the Belfast team level at the end of the quarter, 11 – 11.

A change in defence for St Malachys, going to a full court press to start the second paid immediate dividends, Fulton, Darragh Ferguson and Conn Doherty capitalised on the turnovers and finished on the offensive end and Sliabh Luachra struggled to stop them. It was Paul O’Leary and Collins that did convert when given the opportunity and it was an eleven-point lead to St Malachys at the half, 22 – 32.

The third was back and forth, O’Leary and Gleeson did manage to get on the scoresheet early, but St Malachys found another gear and their match up zone took the edge off any comeback for the Rathmore side. Doherty continued his fine finishing while Fulton and Ferguson ensured Malachys stayed in front going into the fourth, 31 – 49.

The fourth was where the Belfast school put the game away, Rathmore struggled to get clean looks while Ferguson couldn’t miss, it was an exhibition in scoring with ten points in less than four minutes. Tommy Bowler, Collins and Gleeson all tried and scored but it wasn’t enough, and St Malachys ran out winners of this U19A Boys School League Final 46 – 65.

The U16A Boys A final lived up to the expectations! It was a game of runs with either team feeling they could win and that was how it played out.

It was St Joesphs turn in the second, Tony Ezeonu and Clifford started to break down the zone of St Patrick’s and with the Bish’s defensive intensity going up a couple of levels, they quickly reeled in that deficit and pushed on. It was the final minute of the quarter before Oyeleye scored and converted his and one free throw but the damage was done and it was 16 – 19 to the Bish at the half.

Foul trouble started to creep in for the Bish with Ezeonu and Clifford picking up their third and fourth fouls in this quarter. Oyeleye and Moran worked hard and it was close before Ezeonu showed his wide range of skills, hitting two threes to put more daylight between the teams. Ciaran O’Brien and Moran kept the scoreboard ticking for St Patrick’s leave it at a six-point deficit 26 – 32.

The Bish piled on the pressure at the start of the fourth with Kento O’Connor and Ezeonu to the fore. It was Oyeleye with five points and Moran with a long two to keep the deficit to twelve and with just under three minutes to go you would be forgiven for thinking it was all over. But Juska stepped up and scored an ‘and one’ before getting a steal and converting, suddenly it was seven, Juska got another steal and then hit a big three to leave it at three and just under a minute to go. Moran was next and he hit a three and the gap was just one before Ezeonu steadied the ship and saw out the last thirty seconds to leave it 44 – 49 and St Joesph’s the Bish winners of the U16A Boys League final.

A tight opening start saw Methodist College hit their first two mid-range jump shots to get them off the mark. St Andrews went inside to their front court duo and this was to be the theme for the rest of the quarter. Both teams started in a 2:3 zone and stayed that way for most of the first half. Laura McCann and Aoibhinn Heatley got Methody of the mark before Ayshea El Arousi and Sarah Brown responded. Clodagh O’Brien hit her first score and it was a deep three, she followed up with one from two free throws and put St Andrews in the lead for the first time. Brown and O’Brien were working well for the rest of the quarter in the key. Georgie McGrath hit her first basket and followed up with a three in what was a good shooting performance from Methody, McCann and Heatley both hit from seventeen feet to ensure Methody had a one-point lead going into the second 15 – 14.

The second quarter saw the pace pick up, McCann and Heatley were very active on the front of the zone, forcing some steals and getting out in transition. For St Andrew’s, Brown was proving to be a force in the middle on defence, she had multiple blocks and was doing a great job of keeping McGrath quiet inside. Frida Alfvag got some good looks and made a wing three to keep the pressure on Methody. At the half it was all tied up at 26 points apiece.

The third quarter was where the game opened up, McGrath, McCann and Heatley all converted their looks and their defensive pressure and boxing out meant the St Andrews were being forced into contested looks and few second attempts. Brown was the shining light in her finishing with eight points in a row along with Alfrag knocking down her second three to keep St Andrews in touching distance but it was the ladies from Belfast that took a six point lead into the fourth, 46 – 40.

In the fourth, McGrath started where she finished the third, scoring seemingly at will off the hard word work from McCann and Joyce Oluwayleye in particular. Every time St Andrews got a score, Methody came right back at them. An injury to Brown didn’t help St Andrews in the final minutes and Methodist College pulled away to finish winners on a 68-51 score line.